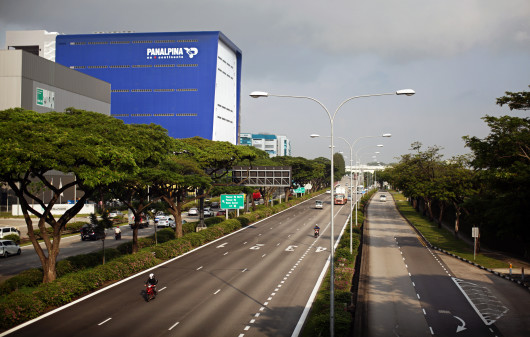 Logistics supplier Panalpina has opened a purpose-built logistics center in Singapore, constructed over six floors and with 25,800 sq m of usable warehouse space.
Speaking at the official opening of the facility, Panalpina chief executive Stefan Karlen said: “Singapore is a very important consolidation hub for ocean and airfreight. The nation-state is investing in the expansion of its ports.”
Karlen also stressed that 96 of Panalpina’s top 100 global customers have a base in Singapore and that the majority of the space at the multi-purpose facility is already rented out to customers.
He continued: “Against this backdrop, Panalpina plans to offer air- and ocean freight services including value-added logistics services to companies, particularly in the energy, healthcare, high tech, manufacturing, consumer and retail, as well as fashion industries.”
Switzerland-headquartered Panalpina plans to test and use many new technologies in Singapore, including the Internet of Things (IoT), augmented reality, and various automation systems. The new facility could also run 3D printers on behalf of customers, meaning it could one day become a hub for distributed manufacturing.
Read more freight forwarder and Technology news
Sign up to receive Air Cargo News direct to your inbox for free