UPDATED: Panalpina recorded a market-beating 5% increase in airfreight volumes during the first quarter of the year as it counteracted a tough oil and gas market but pre-tax earnings declined.
The Switzerland-based freight forwarder recorded first-quarter air cargo volumes of 216,000 tons compared with 205,000 tons for the same period in 2015. It said the air cargo market had shrunk by around 3% during the period.
In contrast, Switzerland-based rival Kuehne+Nagel reported a small drop in airfreight demand for the period.
“While volumes contracted substantially in oil and gas they grew in all other industries including perishables,” it said.
The west coast seaport strikes experienced last year would have also given the overall market a one-off boost in 2015 and effected year-on-year comparisons.
In November last year, it also acquired perishable forwarder AirFlo which contributed to the volume growth.
While volumes increased, airfreight revenues experienced a decline, dropping by 5.4% year on year to Sfr744m.
Airfreight gross profit for the period increased by 0.4% year on year to Sfr149m, while earnings before interest and tax (ebit) dropped by 27.4% on last year to Sfr17.8m.
It said profitability was affected by lower gross profits in the oil and gas business, an area where it has traditionally been strong. The oil and gas business accounts for around 15-20% of overall gross profits at the company.
Revenues are also likely to have been affected by lower pricing in the air cargo industry.
Looking ahead, the forwarder expects the airfreight market to remain flat while its volumes are expected to end up around 5% higher than the previous year, taking into account the AirFlo acquisition.
The overall company saw slight declines in profits and revenues but it was keen to point out it had managed to counteract the tough conditions in the oil and gas market.
Total first quarter revenues declined by 13% year on year to Sfr1.3bn, ebit was down by 5.1% to Sfr24m and net profit fell 11.7% to Sfr17.3m.
Ocean volumes declined while shipping rates during the period also came under pressure.
Panalpina chief executive Peter Ulber said: “In the first three months of the year, we succeeded in counterbalancing the lower transport volumes in oil and gas.
“This was due to the positive development in the rest of the business as well as the fast adjustment of our cost base.
“The results reflect our changing business mix. While the contraction in oil and gas continued, we saw growth in all the other industries that we serve.”
Looking ahead, he said: “The tough comparison due to the decline in the oil and gas business will remain for the second quarter of the year, but we have shown that we can continue to be profitable and ride out the storm.
“Regardless of the current market situation, servicing our oil and gas customers remains a core offering of Panalpina, and with our in-house transport engineering department and projects expertise we can provide unique solutions for the sector.
“At the same time, we will continue to balance our business and product mix throughout the year.”
The company said it is also on-track to implement its new forwarding software, which it hopes will make the organisation more efficient.
The new system supports the implementation of standard global processes for air and ocean freight and replaces the company’s legacy operational systems.
By the end of the year, it hopes to have migrated around 50% of its network to the new system. 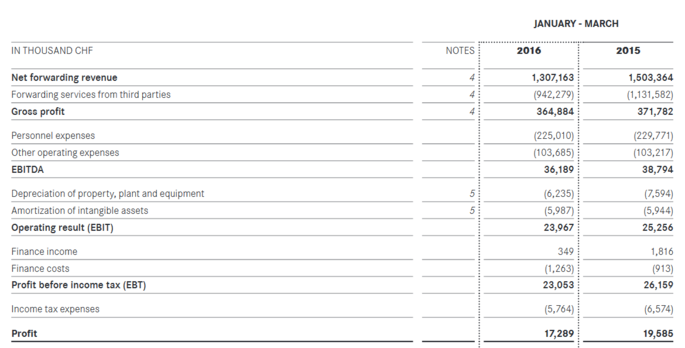