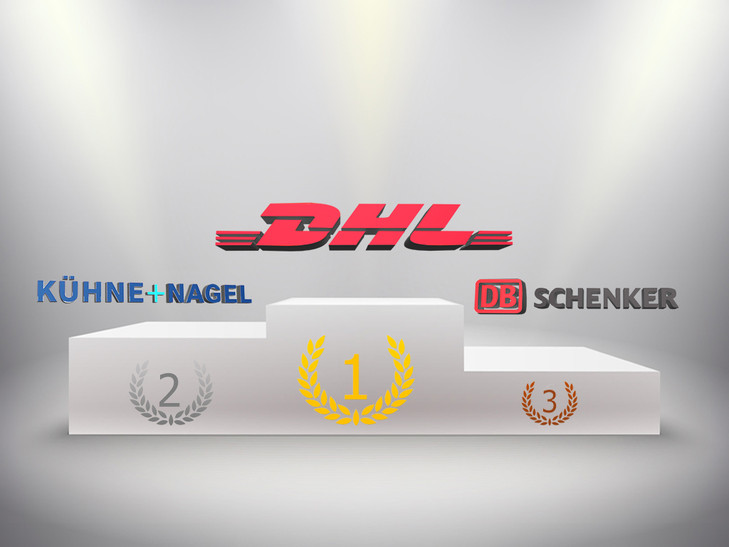 DHL maintained its position as the world’s leading airfreight forwarder in 2015 despite rivals closing the gap, while the top 25 forwarders saw air volumes climb by 2.2% on 2014 levels.
The latest top 25 Global Freight Forwarders List from consultant Armstrong & Associates showed that European forwarders once again took the top three positions in terms of airfreight volumes in 2015, with DHL Global Forwarding and Supply Chain topping the list ahead of Kuehne+Nagel (K+N) and DB Schenker.
However, it wasn’t all good news for DHL as its close rivals managed to close the gap on the German logistics giant as airfreight volumes decline by 7.2% to 2.1m tonnes, while K+N recorded a 4.7% growth to 1.2m tonnes and DB Schenker’s air traffic jumped 1.4% to 1.1m tonnes.
In its full-year results, DHL cited tough market conditions and a selective market strategy – turning away low margin and unprofitable business to improve profitability – as the reason for its downturn in demand.
This year, it is hoping to return to growth as it moves away from its selective market strategy it has also nabbed K+N’s head of airfreight, Tim Scharwath, to lead its forwarding division.
K+N said its above market performance was down to its focus on industry-specific airfreight solutions, which led to significant business wins in the pharmaceutical, aerospace and perishables sectors.
K+N added that its FreightNet online booking portal, which provides instant quotes for airfreight services and freight tracking, also proved to be “an effective new sales channel”.
DB Schenker’s performance was roughly in line with overall market estimates for airfreight demand.
Overall, volumes recorded by the top 25 players reached 13.8m tonnes, an increase of 2.2% on 2014 levels.
Most forwarders included in the list mentioned tough market conditions in their annual reports, but also said they had received a boost during the first quarter when shippers were forced to turn to airfreight as west coast US sea ports closed down due to industrial action.
The best placed North American company was UPS Supply Chain Solutions which maintained its fourth place with volumes growing by 2.5% to 935,300 tonnes.
UPS finished just ahead of its US rival Expeditors, which recorded strong growth of 6% on the back of the west coast port situation.
The best placed Asia forwarder was Nippon Express which climbed a place on last year thanks to an 8.8% improvement in demand to 711,354 tonnes. It also spoke of benefitting for the west coast port strike in the first part of the year, while automobile and electronic volumes also improved.
Winners and losers
The three companies that recorded the fastest airfreight growth rates were: Hitachi Transport Systems (HTS) at 11.8%, Yusen Logistics at 11% and Hellman Worldwide at 10.6%.
At the other end of the scale, the three companies that recorded the largest declines were DHL at 7.2%, Logwin at 6.2% and Damco at 5.3%.
In terms of most places lost and gained, AP Moller Maersk-owned Damco slipped four places and Expeditors and Sinotrans both managed to gain a couple of places.
NNR and Dimerco are new additions to the list, although NNR appeared in 2013, while changes in reporting mean comparisons are not possible with 2014 performance for CEVA, Kintetsu and Dachser.
Next year, ones to watch are sixteenth places DSV after it completed its acquisition of thirteenth placed UTi and Kintetsu, which purchased APL Logistics, although this was earlier in the year and therefore much of the airfreight volume improvement would already have been included in 2015 figures.
Meanwhile, Panalpina purchased Kenyan forwarder Airflo and Gefco bought Dutch forwarder IJS.
On the revenue front 2015 clearly proved to be tough year for most forwarders on the list. Overall, there was an 11.5% year on year decline in revenues to $188bn as lower freight rates due to weak demand and overcapacity took their toll.
Currency affects, with a strong dollar, and lower fuel surcharges also had a negative impact on comparisons. 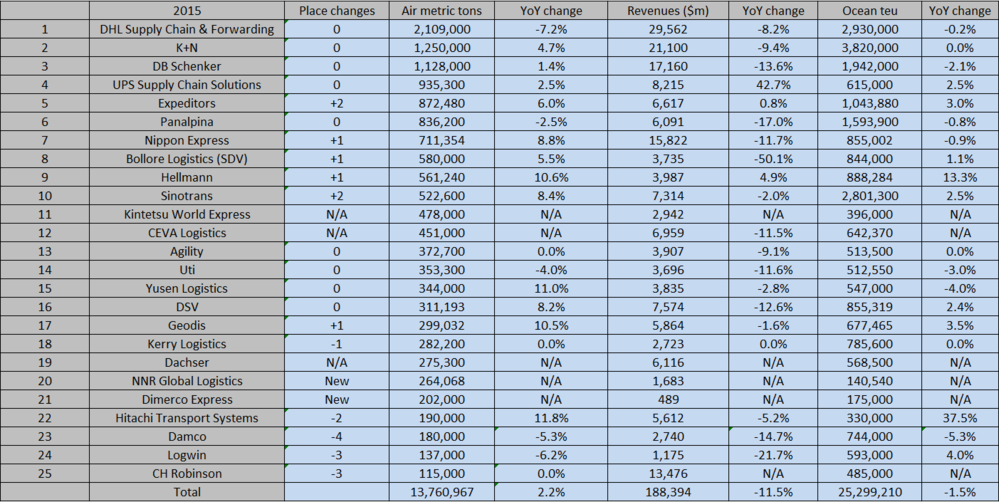 Munich Airport’s total 2021 airfreight volume was 22,000 metric tons higher than 2020. This corresponds to an increase in freight…

China’s air cargo industry has recovered to close to the volume it was at in 2019, the Civil Aviation Administration…