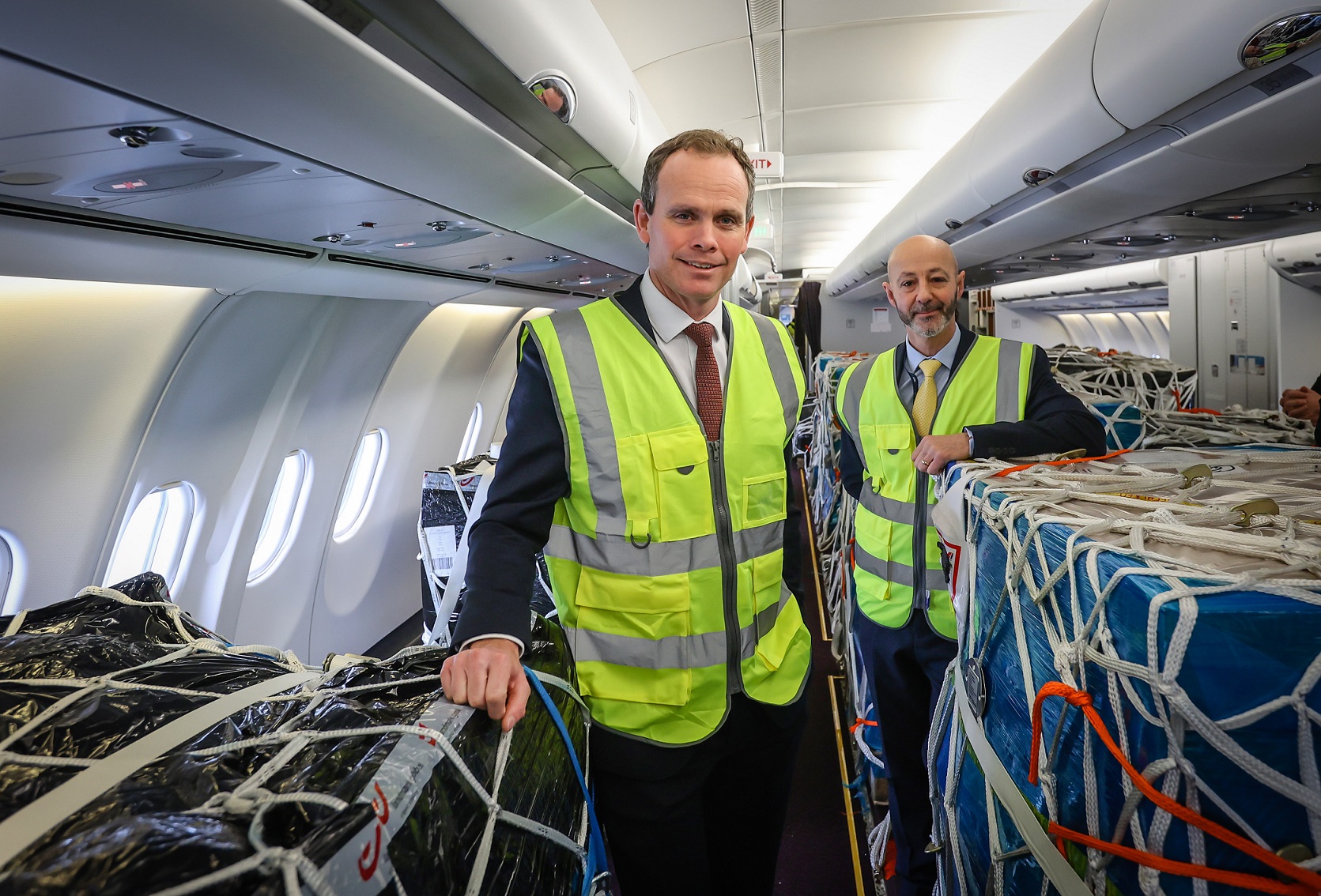 24-hour capability, open slot availability and uncongested airspace are enabling Bournemouth Airport to style itself as a small but flexible alternative to London’s Heathrow and Gatwick airports.

Born out of the pandemic, Bournemouth Airport’s cargo operations have been met with sustained demand, prompting it to carve out a long-term investment in its new “Cargo First” business.

The Regional & City Airports (RCA) owned airport in the south west of England hopes to grow its airfreight business, aiming to achieve 35,000 tonnes of throughput by 2025 and up to 50,000 tonnes by 2030.

200,000 sq ft will comprise repurposed existing buildings. BCP (Bournemouth Christchurch Poole) Council is supporting the airport’s plans and a planning application for is already well progressed for most of the 900,000 sq ft, while more detailed planning permission has been granted for pockets of the development.

“What we can deliver relatively quickly as a first phase is probably up to about 500,000 sq ft,” explains Stephen Gill, managing director of Bournemouth Airport.

The first stage of the plan will see several million pounds invested in the south side of the airport, that will enable up to three widebody aircraft to be parked and handled simultaneously. These will be adjacent to the existing transit shed.

Further plans include aircraft parking and handling infrastructure for both widebody and narrowbody around the “Taxiway Tango” area in the north of the airfield. Transit shed facilities will be in an adjoining area.

The airport aims to grow its transit facilities. Its second transit facility, to the left of the European Cargo hangar, is 30,000 sq ft and is currently being prepared for use.

To the left of that is a new hangar that a third party has just developed, and other development opportunities are available on the north side of the airport.

Beyond this area the airport is considering second line landside logistics, freight forwarding and trucking operations.

A second plot of land to the east of the airport has also been identified for development, although there isn’t a final vision for this yet and development will be based on demand.

Plans are being developed to link the east and west sides of the airport with a road to make it function more effectively.

Traditionally a passenger airport, Bournemouth first handled cargo in the 1970s when Express Air Freight, now Jet2 plc, operated at the airport. However, Cargo First is the first large-scale operation.

From a negligible amount of cargo in April 2020, Bournemouth has handled 20,000 tonnes in the year to the end of March 2022. This is approximately 1% of what goes through the London market, says Gill, so there is plenty of scope for Bournemouth’s growth and plenty of space in the market itself for newcomers, he points out.

As well as building regular cargo flights, the airport is providing a service moving cargo for forwarders and customers to transit sheds in the London area, within three hours of the city.

However, rather than being a feeder airport for London Heathrow and Gatwick airports, Bell explains: “We’re absolutely focused on becoming a destination and origination point as well. Freight can be distributed across the UK or into Northern Europe just as easily from here as from London.”

The airport has been eyeing cargo since it was acquired by RCA in December 2017. The grounding of passenger flights and removal of belly capacity from the airfreight market that saw massive demand for capacity provided that opportunity.

“That was the opportunity we jumped on because we could see the opportunity to divert flows that were well established into other airports. Heathrow being the primary one for the UK, in and outbound,” said Bell.

Demand for pandemic-related PPE and Covid test kits was a natural place to start. Testament to this is European Aviation Group, which has been based at Bournemouth Airport for 30 years and whose European Cargo business launched in April 2020. 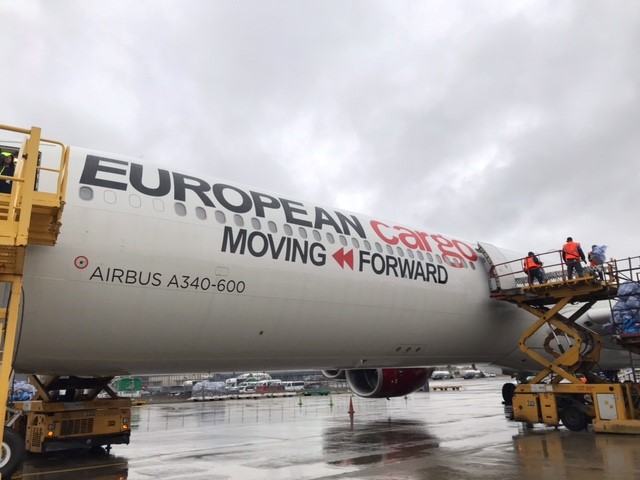 European Cargo currently operates a fleet of six A340 widebody aircraft as cargo-in-cabin aircraft between the UK, China and the US. There will be 10 aircraft operating by the end of the year and 12 by the end of March 2023.

The company owns 17 A340s in total, which it will be independently carrying out passenger to freighter (P2F) conversions on, minus the cargo door, from the latter half of this year, explains Paul Stoddart, chief executive of European Aviation.

The decision to not fully convert the aircraft may be surprising, but it was a logical move, explains Stoddart.

European Cargo’s efficiency measures include the creation of 46 rolling “pods” which measure up to 88 inches high and are used on the upper deck. These purpose-designed smoke and fireproof pods were built in conjunction with DHL and Hermes and can be quickly loaded with loose parcels and rolled on and off the aircraft. Tests show the whole aircraft can be unloaded in under two hours.

“All we do is fold the top down, zip it down both sides put the fireproof Velcro on the front,” says Stoddart.

Pandemic-related freight has been the lifeblood of European Cargo’s business, with initial flights operated on behalf of the UK’s National Health Service (NHS) to transport PPE and lateral flow test kits.

The company, which now has over 400 employees, operates a flight from Bournemouth to Fuzhou Changle International Airport in China for the NHS, which operates daily.

However, the company also handle all kinds of general cargo now, including mail, cars and e-commerce.

“We’ve had a Bournemouth to JFK contract for the last two years with DHL,” says Stoddart.

“Then we’ve got a Bournemouth to Qingdao flight – a Hermes e-commerce type contract for electrical items. That will be three times a week with the aspiration to go daily.”

European Cargo plans to decide on replacement aircraft in 2030. It expects to keep the fleet of A340s until 2032, though some will likely operate until 2035.

Charter flights are important during this early stage of cargo operations, while full schedules aren’t yet in place.

“There’s all the practical issues of slots,” Bell says. “Whilst we’re keen to develop scheduled trade lanes, charter capacities are in high demand as well. Being able to offer that without slot constraints 24 hours is really important.”

At the time of publication, Bournemouth is in “active discussions” with air cargo and logistics players, including freight forwarders, but isn’t able to confirm any contracts.

Local companies, such as in the aerospace and maritime sectors, plus the military, looking to transport cargo worldwide have also been identified as potential customers to take capacity on regular services.

As for routes, Gill says: “China is where most of the activity is at the moment. This is where a lot of European Cargo’s enquiries are coming from.”

Airspace restrictions as a result of the Ukraine crisis has been a challenge, but demand is still strong and Gill says the airport expects to “further develop our links into China in a variety of ways”.

Bournemouth does also have business going west to the US and Canada. These destinations and others will be better served when European carry out their conversions and are able to be able to carry a better variety of goods in the upper cabin, such as perishables, explains Gill.

Pandemic-related cargo comes with a time limit, acknowledges Gill, but crucially it has served as an in-road for the Cargo First business.

“The NHS business was never going to be there forever. It’s dying away. But it’s helped us to prove competence and raise awareness,” says Gill.

Meanwhile, Bournemouth Airport is confident demand can be sustained with the return of belly capacity and redistribution of cargo at more hubs,

The team believe the diversity of innovative logistics solutions and increased entry routes into the UK are here to stay.

Brexit bureaucracy paperwork requirements have also presented an opportunity with more cargo traffic landed in the UK that otherwise would have been flown into continental Europe and a consignment then trucked onwards to the UK.

Bournemouth anticipates it can utilise flexible flights at a preferred time and a competitive rate, with the ability to get consignments off aircraft into their end warehouse in London at speed, to enable it to compete with Heathrow and other European hubs.

Gill stresses: “Regional airports like ourselves can be cheaper than the hubs.”

Aircraft design is also a factor. “Whatever the rate of recovery of belly, the amount of belly capacity is reducing as aircraft shape, size, design is changing,” Bell says. “There simply isn’t as much space on these airplanes.

“The rate of market growth is also outstripping the capacity growth that might come from more aeroplanes, with those aeroplanes being smaller. So that’s the supply side.”

He adds: “On the demand side, the market is bigger than it was previously. So even if you wanted to put everything into the belly of an aircraft that was going into a traditional operation like Heathrow, you wouldn’t be able to because there wouldn’t be the capacity to serve the market.”