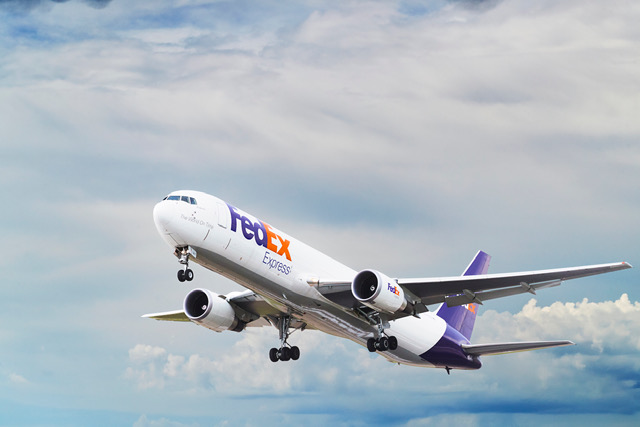 Performance at the top 25 airlines (see chart at end of article) was roughly in line with the overall market, as those leading carriers saw cargo volumes increase by 18.8% year on year.

The improvements came as global economies continued to open up following the worst of the Covid pandemic.

Meanwhile, some travel restrictions were eased, which allowed passenger airlines to tentatively expand their operations. These airlines also continued to benefit from cargo-only flying.

E-commerce volumes increased rapidly as shoppers turned to online purchases and there was ongoing PPE demand and the need to transport Covid vaccines.

For freighter operators it was another strong year on the back of the soaring demand outlined above. Those airlines offering cargo services reaped the financial rewards.

On the back of high freight rates, air cargo contributed 40% of total airline revenues in 2021, said IATA in its annual forecast issued in June 2022.

The trade association said that air cargo generated $204bn in revenues, which is far above the $135.8m registered in 2020.

Looking at regional performance, IATA data shared in January 2022 shows that carriers from all regions – apart from Latin America – recorded an increase in demand in 2021 compared with 2019 levels (used to provide a comparison with pre-Covid performance).

North American carriers far exceeded other regions with a 19.8% annual increase in CTKs compared to 2019.

North American airlines, which IATA says benefited from strong consumer demand, were also the only carriers to record growth in capacity compared with 2019.

Middle Eastern carriers reported a 10.5% increase in CTKs compared with 2019, and European carriers recorded a 3.7% increase.

Asia Pacific airlines fared less well as they contended with pandemic restrictions that resulted in a 0.2% rise in CTKs.

African airlines saw growth of 10.2%, which was “driven by a vigorous flow of goods and investments from China”.

Latin American carriers, several of which were undergoing restructuring processes in 2021, recorded a contraction in demand of 15.4% compared to 2019.

IATA director general Willie Walsh says: “Air cargo had a stellar year in 2021. For many airlines, it provided a vital source of revenue as passenger demand remained in the doldrums due to Covid-19 travel restrictions.”

But he notes: “Growth opportunities however were lost due to the pressures of labour shortages and constraints across the logistics system.”

While the year started strongly, IATA also said in its annual review that volumes in North America, the Middle East, Asia Pacific, and Europe lost steam as the year progressed partly because of “elevated inflation and related supply issues, the end of the inventory restocking cycle, and a shift in demand from goods to services”.

Federal Express (FedEx) retained its position as the top cargo airline in 2021, albeit with less growth than other top-performing airlines.

Fleet modernisation and growth is an ongoing goal for FedEx. Outlined in its annual report, as of May 31, 2021, the fleet consisted of 684 owned and leased aircraft, compared with 679 aircraft a year earlier.

Pandemic-related cargo charters and the resumption of passenger operations helped Qatar Airways move into second place in 2021, with a volume increase of 17.2% year on year to 16.1bn CTK. The fast-growing carrier started the year by adding the capacity of three B777-200Fs.

Qatar Airways says it was the first airline to use passenger aircraft to carry solely airfreight, including mini-freighters, to meet increased demand. In a market wrap up, the carrier said it continued to handle traffic related to the pandemic and reported that since the outbreak of the pandemic it has carried 500,000 tonnes of medical cargo.

“A significant part of the tonnage continued to be medical equipment, PPE, and critical supplies to combat the pandemic, including free medical aid to India at the height of the crisis there in April and May,” the carrier says.

“Among these, 500m Covid-19 vaccines were transported throughout its network.”

To support its pharma growth in 2021, QAC became a member of Pharm.Aero and the Cool Chain Association. It transported vaccine shipments for UNICEF as part of a February Memorandum of Understanding (MoU) to support its Humanitarian Airfreight Initiative and Covax programme for five years.

United Parcel Service (UPS) saw growth of 8.1% to 15.5bn CTK last year, but the express operator dropped one place to third position as, like FedEx, growth increased at a slower rate than the overall top 25.

UPS’s large fleet enabled it to make the most of capacity demand, but like FedEx, it was not able to capitalise on demand from freight forwarders and shippers for dedicated operations.

UPS says growth in e-commerce slowed as retailers opened their stores: “We experienced a year-over-year increase in commercial volume as business returned to pre-pandemic levels, while business-to-consumer volume declined, partly due to the surge in e-commerce at the onset of the pandemic.

“In the second half of the year, Covid-19 resulted in a reduction in the number of flights we operated in Asia relative to our expectations, which contributed to an overall decline in international volume in the fourth quarter.”

UPS had 595 aircraft at the end of the year, compared with 588 a year earlier.

How have other airlines fared?

Emirates benefited from the return of passenger operations to retain fourth place among the top cargo carriers with a 28.8% increase year on year to 11.8bn CTK.

Duncan McNabb, chairman of the board and John Dietrich, president and chief executive, said in the company’s 2021 annual report that in addition to securing long-term contracts “we reserved and allocated capacity to take advantage of high-yielding opportunities in the global ad-hoc charter market”.

Dietrich said Atlas benefited from reintroducing four B747Fs and one B777F to its fleet in 2020. The company also purchased six of its existing B747-400Fs in 2021 that were on lease.

“We take a disciplined and balanced approach to capital allocation. We have strengthened our balance sheet, made significant investments in our fleet, including new 747-8 and 777 freighter aircraft.”

All Nippon Airways (ANA) was another airline to prosper in 2021 with demand for e-commerce and electronics serving it well.

In April 2021, ANA expanded its Los Angeles-Tokyo Narita freighter service with the use of B777Fs, rather than B767Fs to offer more capacity.

Then in July 2021, ANA introduced its B767 freighters to China with the launch of a twice-weekly service using one of its B767Fs between Beijing and Tokyo.

While many passenger airlines saw their cargo volumes bounce back last year as they expanded cargo flying and re-introduced some bellyhold operations, this wasn’t the case for all.

While these restrictions were relaxed in April last year, many remained, affecting the carrier’s ability to restart passenger operations.

The end of 2021 was also marred by a seven-day suspension of long-haul freighter and cargo-only passenger flights to and from Hong Kong in response to further cargo crew quarantine requirements.

2021 also saw Air France and Etihad Airways become new entrants to the top 25 airlines, while KLM and Silk Way West Airlines dropped out of the list. 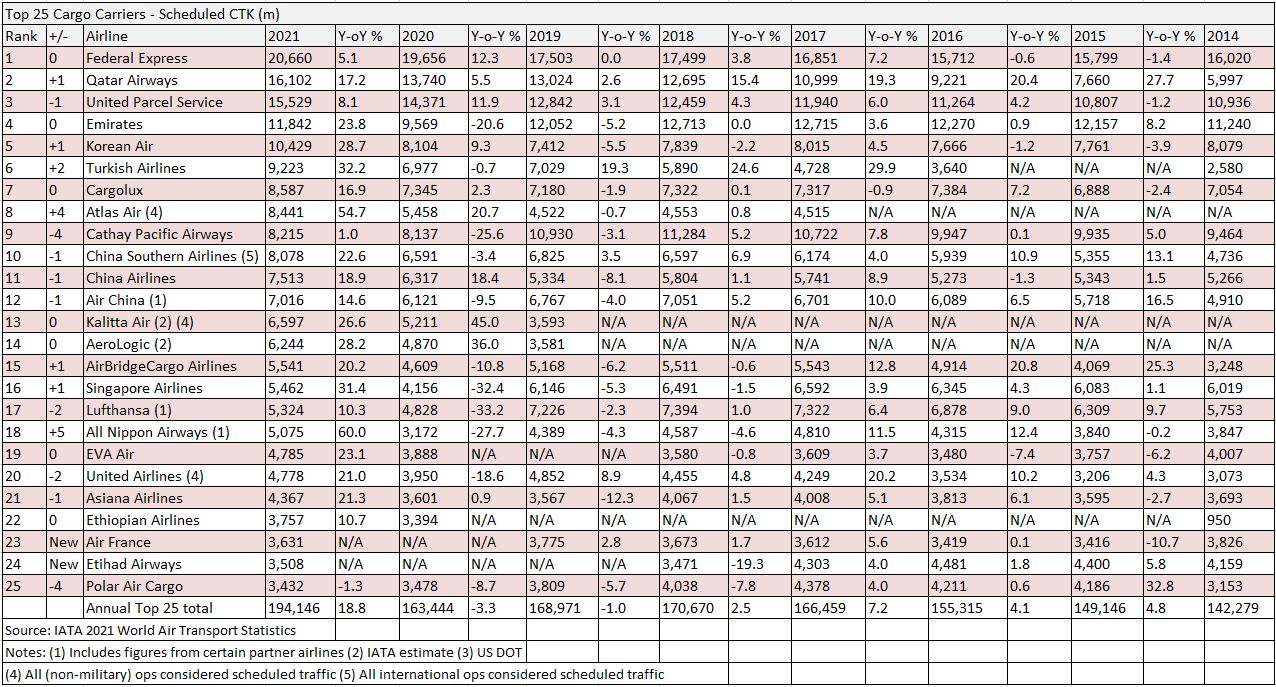