‘Cosmic Girl’ hooks up with LauncherOne 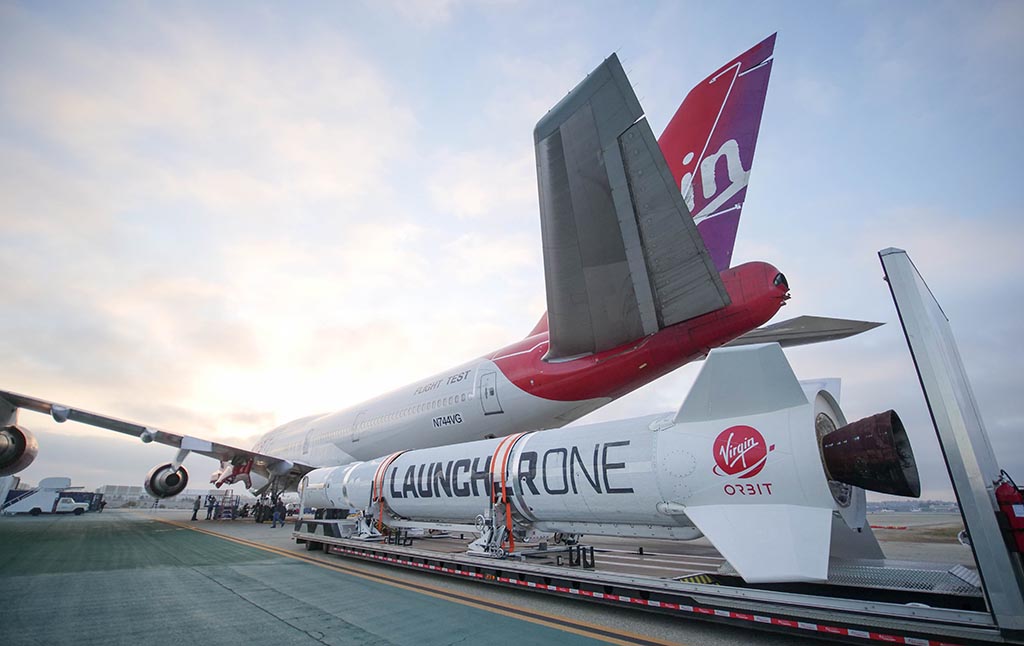 A specially modified Virgin Atlantic Boeing 747-400 passenger aircraft dubbed ‘Cosmic Girl’ is currently at California’s Long Beach Airport, where it has been successfully paired with Virgin Orbit’s LauncherOne rocket.
The aircraft is to serve as the flying launch pad of British entrepreneur Sir Richard Branson’s orbital rocket.
LauncherOne is now tucked snugly under the B747-400’s wing awaiting an extensive test flight campaign. This will include several ‘captive carry’ flights, during which the rocket will remain in the aircraft’s embrace.
Virgin Orbit chief executive Dan Hart noted: “It took an incredible amount of planning and hard work to make today go so smoothly. Modelling and simulations are priceless tools, but nothing beats conducting real operations with real hardware.
“The fact that we shipped a rocket on this route, positioned it under the aircraft, integrated the system, and verified that it all works together for the first time all within a single day still astounds me. In the traditional aerospace world, doing all of that would have taken weeks,” he added.
However, all good things must come to an end, and the marriage of Cosmic Girl with LauncherOne is no exception: a final drop test to check the release mechanism will see the rocket fall back to Earth.
Cosmic Girl won’t be alone too long, though. Several more rockets are being assembled at Virgin Orbit’s rocket factory, less than a mile away from Long Beach Airport. The company said that besides having already manufactured its first orbital rocket, it also has two fully integrated rocket stages undergoing testing on custom-built stands at the Mojave Air and Space Port.
The Virgin Group first began research into small-satellite launch technology less than a decade ago. Work on its B747-launched system began in early 2015 (initially as a department within one of Virgin Orbit’s sister companies, Virgin Galactic).
The system will enable the company to provide a “concierge launch service” tailored to each customer’s needs for launch location and orbital inclination.