DHL T-shirts, after a fashion 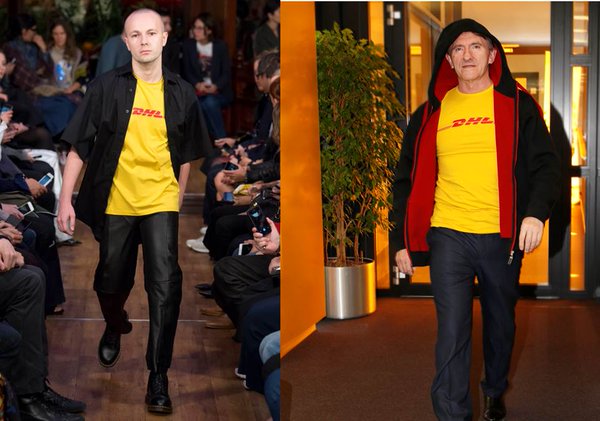 In the week that its supply chain arm took on responsibility for German airline Lufthansa’s global work apparel, DHL has been making waves in the fashion as well as the freight press. Only a few days earlier, it was revealed that the high class Vetements label had included a yellow DHL T-shirt in its latest collection.
Stars of stage and screen have apparently around the world have been seen in the bright yellow garment ─ normally sported by hard-working delivery drivers and parcel sorters ─ including US rapper Jaden Smith, his model girlfriend Sarah Snyder and global clothes blogger Margaret Zhang. (Needless to say, the resolutely unfashionable ACN editorial team had to resort to Google to find out who any of these people were.)
It goes without saying that the Vetements version of the DHL T-shirt retails for a comfortable three-figure dollar sum.
With catwalk models strutting their stuff in bright yellow, inevitably that DHL folk themselves have also got in on the act; a photo of chief executive Ken Allen has been widely circulated on the Internet.
We’re not sure who, if anyone, has been giving Mr Allen fashion tips; his yellow T-shirt was topped off by a black hoodie.
With luck, Lufthansa personnel will have no such problems. DHL will process around 53,000 orders a year at its warehouse just outside Berlin, a facility that comes with its own tailoring shop, so pilots, flight attendants and ground personnel can get their uniforms made to measure.
DHL will also be responsible for the buying and procurement of the clothing, though presumably not at Vetements prices.