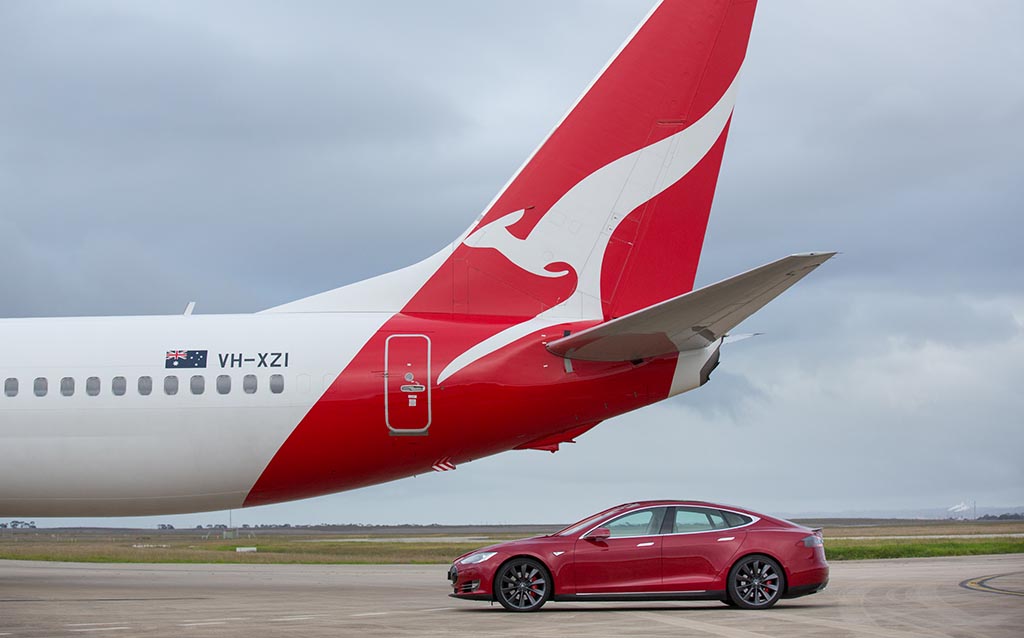 We’re not quite sure what, if anything, they were trying to prove, but Qantas recently pitted one of its Boeing 737-800 aircraft against a 250kmph Tesla electric sports car at Melbourne’s Avalon Airport. As the Australian airline’s own publicity pointed out, the 737 can fly through the sky at a cruising speed of 850kmph while the five-seater Model S Tesla can go from 0 to 100 kilometres an hour in three seconds but can’t fly.
The Tesla took off from the start at a cracking pace with its electric motors, while the two engines of the 737 were still revving up on the runway threshold. But the 737 narrowed the gap as it barrelled down the runway and they were both neck and neck as the 737 reached its take-off speed of 140 knots while the Tesla reached maxed out at around 250kmph.
So the Tesla can get to the end of the runway as fast as a 737? Useful for careless plane-spotters, who have failed to note down the registration of a departing plane, maybe, but is anyone else seriously bothered? That the Boeing product is quite handy in the air? Well, we kind of knew that anyway.
Qantas’ head of Environment and Fuel, Alan Milne, said the collaboration was a meeting of minds and promised future regular meetings between both companies “to investigate future opportunities around sustainable transport”.
Maybe the result will be a battery electric 737 at some point in the future. I wonder how many days – or weeks – that would take to charge up?