Meeting of minds in Miami 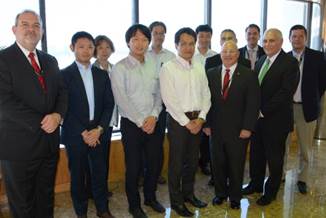 Representatives from Tokyo Narita International Airport met their opposite numbers at Miami-Dade Aviation Department officials at the US city’s international airport on April 28 to learn about cargo operations and redevelopment plans.
Miami is the busiest US airport for international freight and tenth in the world – the only US airport among the world’s top ten – while Narita is the world’s fifth-busiest international freight airport.
Topics discussed included Miami’s Cargo Optimization, Redevelopment and Expansion (CORE) programme to modernise and double cargo; the future Airport Operations Center to allow staff to monitor and coordinate all airport operations and communications; the airport’s recent designation by IATA as the first pharmaceuticals freight hub in the Western Hemisphere; and efforts to attract the first-ever non-stop passenger service between Miami and Asia.
“Japan is an important market in our strategic plan for cargo and passenger expansion,” said Miami-Dade Aviation Department Aviation director Emilio González. “It was an honour to host our colleagues from Narita International Airport and to discuss growth opportunities in both of our world regions.”