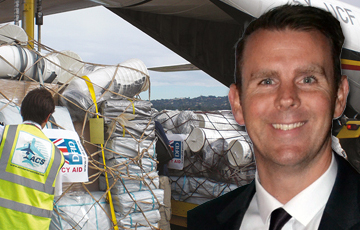 Air Charter Service has appointed Richard Thompson as president of the company’s North America operations.
Thompson will be responsible for the UK-based company’s operations in New York, California, Texas and Canada. He steps into the position previously held by Andy Christie, who was last month promoted to group director of ACS’s Private Jet charter division.

Having joined the aircraft charter specialist in 2004, Thompson has played integral roles in relief operations to all corners of the globe, including helping in the aftermath of the tsunami in the Indian Ocean, the earthquake in Haiti and the typhoon in the Philippines.
Moving to the New York office in 2011, he took over the role of cargo director and subsequently executive VP of ACS North America.
Thompson commented: “Over the past decade, we’ve grown to become one of the biggest names in cargo aircraft, commercial airliner and private jet charters, but we still have ambitious plans to grow our company further, a challenge I look forward to undertaking. I believe that there is tremendous room for growth in a number of areas across our passenger and cargo divisions."