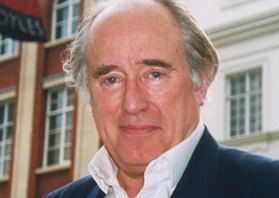 In a LinkedIn post, TIACA said: “With heavy hearts, we share the very sad news of the passing of Christopher Foyle. Chris was not only a past chairman of the association but also a friend to many. In 2007, Chris was inducted into TIACA’s Hall of Fame for being an industry leader and man of great vision, known for his high level of commitment, innovation, resourcefulness, and perseverance.

“Chris was a pioneer in moving outsized cargo worldwide and a staunch advocate of Open Skies. Throughout his career, he carried a passion for the air cargo industry that transcended everything he touched. We thank you, Chris, for sharing that passion with the association and the industry; you will be greatly missed.”

Active in the aviation industry for 40 years, Foyle started in business by working in his family’s bookstore Foyles, however, he started flying gliders at the age of 15 in Dunstable in England and obtained his power plane license in 1975.

He founded Air Foyle in 1978 at Luton Airport with one secondhand Piper Aztec used for passenger and cargo charter and aerial survey in the UK and Europe.

He grew the fleet to eight twin-engined aircraft and pioneered overnight charters between the UK and Europe for the new courier companies.

One of these, TNT, purchased a fleet of new BAe 146 aircraft converted to freighters and in 1987 contracted with Air Foyle to operate and manage a fleet of 10 on a nightly schedule around Europe.

Following three years of negotiations, Foyle, in 1989, did a deal with the Antonov Design Bureau of Kiev, then in the Soviet Union, to represent them worldwide for the charter of their giant AN-124 Ruslan cargo aircraft.

Starting with two, this grew to a fleet of seven plus the even larger six engined single AN-225 Mriya aircraft. Air Foyle took over the entire commercial, financial and operational management of this fleet, worldwide.

They were busy in both Gulf Wars, Afghanistan and all the United Nations peacekeeping operations, in addition to civil commercial charters for major industrial companies such as Boeing, BAe Systems, Rolls Royce, General Electric, Siemens.

Air Foyle also diversified into the passenger airline business and operated a fleet of Boeing 727 and 737 and Airbus A300 and A320 aircraft for tour operators and other airlines including Airworld and easyJet.

As an advocate for fair bilateral negotiations, in 1998 Air Foyle joined with the three other principal British cargo airlines to form the British Cargo Airline Alliance chaired by Foyle.

The group lobbied the United Kingdom government to ensure that any imbalances in favour of the US cargo carriers were addressed during US/UK bilateral negotiations for so-called ‘Open Skies’.

After serving as chairman of the operations committee and as vice president, Foyle became chairman and chief executive of TIACA in 1997 and 1998.

In 1999, on the death of his aunt Christina Foyle who had run them for 55 years, Foyle took over responsibility for and control of Foyles and its associated property companies.

In 2005 he became a trustee of his family’s charity, the Foyle Foundation, which gives £5m a year to UK charities in the fields of education and learning and the arts.

He published the expanded English language edition in association with TIACA of ‘The History of Air Cargo and Air Mail from the 18th century’ by Camille Allaz, ‘Pioneers to Partners – a photographic history of all British aircraft from 1945’ by himself and Leo Marriott, and the translated from Russian into English Andrei Sovenko’s ‘Wings over the Planet – a History of the first 30 years of Antonov commercial charter operations’ begun with Air Foyle in 1989.

He has also been a frequent speaker at and chairman of International conferences worldwide on air cargo, air finance, CIS aviation and virtual passenger airlines.

For two years he was chairman of the Air League UK the premier UK Aviation Charity founded in 1909, and subsequently became its deputy president.

In 2014 he founded The Air League of Monaco with HSH Prince Albert II and Sir Stelios Haji-Ioannou as its principal patrons. The League gives 25 scholarships and awards a year to young people with aspirations to fly towards a career in aviation.

In the same year he founded the Foyle Research Institute to investigate scientifically, anomalous and mysterious phenomena.

He was a fellow of the Royal Aeronautical Society, the Royal Geographical Society and of the Chartered Institute of Transport and Logistics, a liveryman of the Honourable Company of Air Pilots and a freeman of the City of London. He was also deputy Lord Lieutenant of the county of Essex, UK.