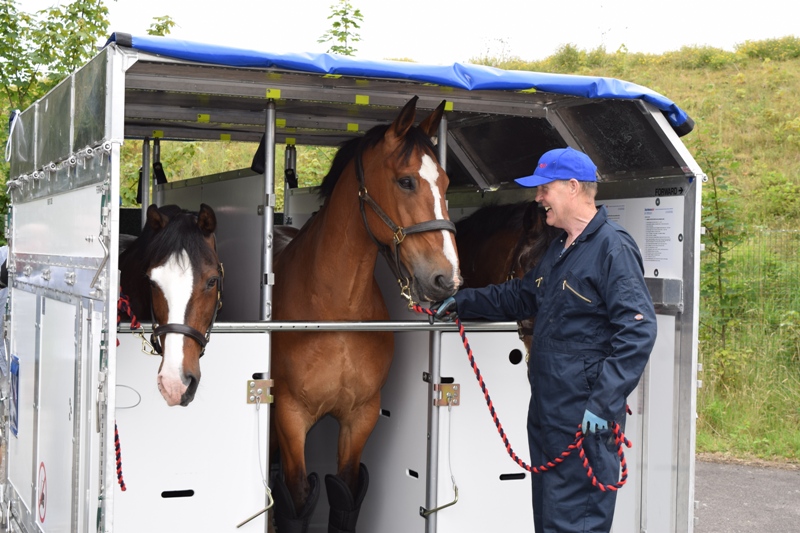 A 1970s meeting in a London pub was the starting gate for InstoneAir, an airfreight company that today specialises in equine transport and the movement of around 6,000 horses per year.

The original Instone Airlines was formed in 1919 and began by flying customs documents across the English Channel for the parent company’s shipping arm — a revolutionary concept that 40 years later would set the foundations for the DHL courier empire.

The Instone airline — later to carry passengers — has long since disappeared, becoming part of Imperial Airways in the 1920s, the forerunner of today’s British Airways.

The Instone offices today still have black and white pictures of those early pioneering days hanging on the walls.
Today, Jeremy Instone is managing director of InstoneAir, a company that builds and leases a fleet of specialist horse stalls for airfreight, but also arranges aircraft charters for equines, livestock and zoo animals involved in breeding or conservation programmes.

“We appeared on the scene in about 1979 after meeting a friend in a London pub who was transporting horses to Australia and was not happy with the British freighter companies he was using.

“He was probably paying a bit too much and we knew some people at Cargolux, so we phoned them and asked if they fancied flying horses from Heathrow to Sydney.

“They said ‘yes, we will give it a go on a DC8-63 freighter’. We got a price from them which was significantly less than what our friend was paying.”

Instone built some basic wooden walk-on, walk-off horseboxes for the flight, which was successful and resulted in Instone becoming Cargolux’s horse transport GSA.

Other GSA appointments would follow in the years ahead, including Flying Tigers (later taken over by FedEx), Burlington Air Express and ATI.

It was “quite tricky” for the start-up because the established horse transport airlines contested the flying rights applications by Instone.

“Fifth freedom traffic rights in those days allowed us to operate a certain number of flights between two city points, something like five per year between Heathrow and Sydney.

“Beyond that number of flights, there must be ‘no objections’ from the other airlines which, of course, were not forthcoming. So, we said ‘okay we will now operate between Heathrow and Melbourne’, and so it went on with the fun and games.”

The 1970s flight from London to Sydney could take up to 30 hours or more due to quarantine rules which meant the aircraft had to fly via Toronto and across to Calgary or Vancouver, then down to Honolulu and on to Fiji, and from there to Australia.

“It was a pretty long flight for the horses, but we had about 12 grooms on those flights in the good old days of the DC8, which had sufficient seats at the back of the aircraft.”

The backhaul flight would quite often take horses from Australia to Kuala Lumpur, Bangkok or Hong Kong “and then sometimes from those points we would wend our way with freight to Europe”.

Equine market
Official statistics are hard to come by for the total equine market but Instone estimates that around 60,000 horses are air transported every year, helped by the emergence of the Middle East cargo carriers with large freighter fleets on scheduled services, and the wealthy region’s fascination with horse racing, show jumping and eventing.

The “well-loved DC8 freighter is no more” and has been replaced by the Boeing 747F or Boeing B777F, but one issue with chartering modern freighters is having enough seats for the grooms.

“If you’ve got 100 horses on a B747F, you need quite a lot of seats for the grooms, but some of them can carry a maximum of just five grooms.

“Some B777Fs will take up to nine or in some cases 11 grooms and so, on more modern aircraft, by using better horse stalls and better qualified grooms, you can fly with quite a lot of horses.”

Instone would like to see grooms trained for internationally recognised qualifications when flying with horses.

He adds: “There is a pool of professional flying grooms that we use as much as possible, who have been trained not only to look after horses but also in airline procedures and safety.

“But often, shippers want to put their own grooms on board, which is an issue because, due to the lack of seats, you really want top-class people on the aircraft at all times, but sometimes it is not possible to have every seat filled by the most qualified people.

“A few airlines will allow pretty well anyone to fly with a horse, and the groom might not have flown with a horse before and may not be aware of safety issues on a freighter. It is not something we would recommend, but it happens.”
Instone is working with the Animal Transport Association (ATA) in a programme that will train ‘flying’ grooms and issue a certificate to show that they know the fundamentals.

“It is basic, but better than nothing, and yet we still get some resistance because people are asking why should we do it and who is going to pay for it?

“Our attitude is to put a programme in place, get the grooms trained and qualified before there is an incident and it is forced on the industry in a knee-jerk reaction with arbitrary regulations.”

IATA has launched its CEIV Live Animals certification, following on from the highly successful programme for pharmaceuticals.

While Instone welcomes CEIV Live Animals and would like to be part of the certification process, along with shippers, handling companies and airlines, he points out that it is broad in scope and may not include groom training.

“The programme probably needs to be divided up because there are equine agents who deal only with horses and are not interested in the other elements of live animals transport.”

He would like to see a separate qualification for grooms as a subset of the CEIV qualification, adding: “There are the pet shippers who transport cats and dogs and are not involved in any of the things we are, such as livestock and zoo animals. For us, the overall programme will be pretty useful and for others it will not.”

Instone’s own fleet of specialist horse stalls, around 500 at present, are either leased out to carriers or employed in the company’s charter broker business, as well as being used on scheduled services.

Collapsible stalls
The company has a wide variety of horse stalls available, including its new fully-collapsible Airstable with a solid roof which can be easily transported when empty in an aircraft’s bellyhold, reducing positioning or return costs.

InstoneAir’s collapsible Airstable was launched at the start of 2020 having received European Technical Standard Order authorisation by the European Aviation Safety Agency (EASA).

All new container types require design and manufacturing approval, and have to comply with FAA, CAA and EASA regulations, including stress-testing: “It is a lengthy, time-consuming and expensive procedure. The mantra is traceability and that means every nut and bolt has to be recorded with copious amounts of paperwork and documentation.”

Asked if these stalls are business class for horses, Instone does not hesitate with a riposte: “More first class, I would say.”

He adds: “There are still uncertified stalls around and you can still get away with using them if you have got a net over them, but that is likely to change because it has proven to be pretty inadequate. More and more airlines are demanding certified equipment and that is why we’ve invested to develop the certified range.”

Instone adds that these expensive units suffer regular damage from a few “shocking” ground handlers, whose staff regularly puncture horse stalls, thankfully empty of their precious cargo, with forklifts, and he indicated a number of horrendous examples to this reporter when walking around the repair depot.

Instone is currently focusing on the collapsible Airstable with its solid roof that can be turned around to fit the different airframe contours of a B747, MD-11 or most freighter models: “It is quite versatile and useful for the airlines that want to swap things around.”

An experiment with air-conditioned horse stables a few years ago was successful, proving horses could travel long distances and still arrive in good condition, but technical issues around weight, batteries and materials proved challenging.

A simpler version is on the drawing board, using lighter fans and exhausts powered by longer-life, aviation-approved rechargeable batteries that do not need cables plugged into the aircraft hold and so would not present an obstacle course for grooms, crew and ground handlers.

The prototype will not be air-conditioned but will instead ensure a constant, filtered airflow, recognised as a key factor in a stress-free flight for horses, some of which can be worth tens of millions of dollars each.

The new stall should be ready for testing by the middle of 2020.

Another strand of equine inflight well-being are plans for sensor patches to be placed on horses to measure a wide range of data, such as the animal’s heartbeat and temperature and other external factors such as humidity, during the journey onboard the aircraft.

Says Instone: “Periodically, we see research into the transport of horses, but it is hard to compare like with like, because it depends on the airline, the aircraft type, the age of the aircraft and its ventilation systems, as they can vary substantially. The length of the flight and the routes, as well as many other aspects can also affect the result.

“We are a little sceptical because to get a really good range of results you have to fly on a lot of aircraft and on lots of routes, and it also depends on whether or not you have got freight in the aircraft: whether you’ve got one airstable and 29 pallets of freight, or half and half, and whether or not there is freight in front of the horse stall, restricting airflow.
“There are a lot of variants to consider, not least the type/size/temperament of the horses so we are a little bit doubtful as some aspects are difficult to control or analyse accurately. I don’t want to put people off doing research, but there are some fairly fundamental things that need to be improved first, which include groom qualifications.”

He adds: “So any of these exercises are worthwhile but at the end of the day I wonder whether or not they will result in substantial improvements.”

Instone owns horses, but rarely bets on races, although many years ago he did transport a horse that had its own aircraft charter.

“I thought that was a good sign and placed a decent bet. It came in at very good odds, just before my honeymoon, so the extra money came in very handy,” he says.