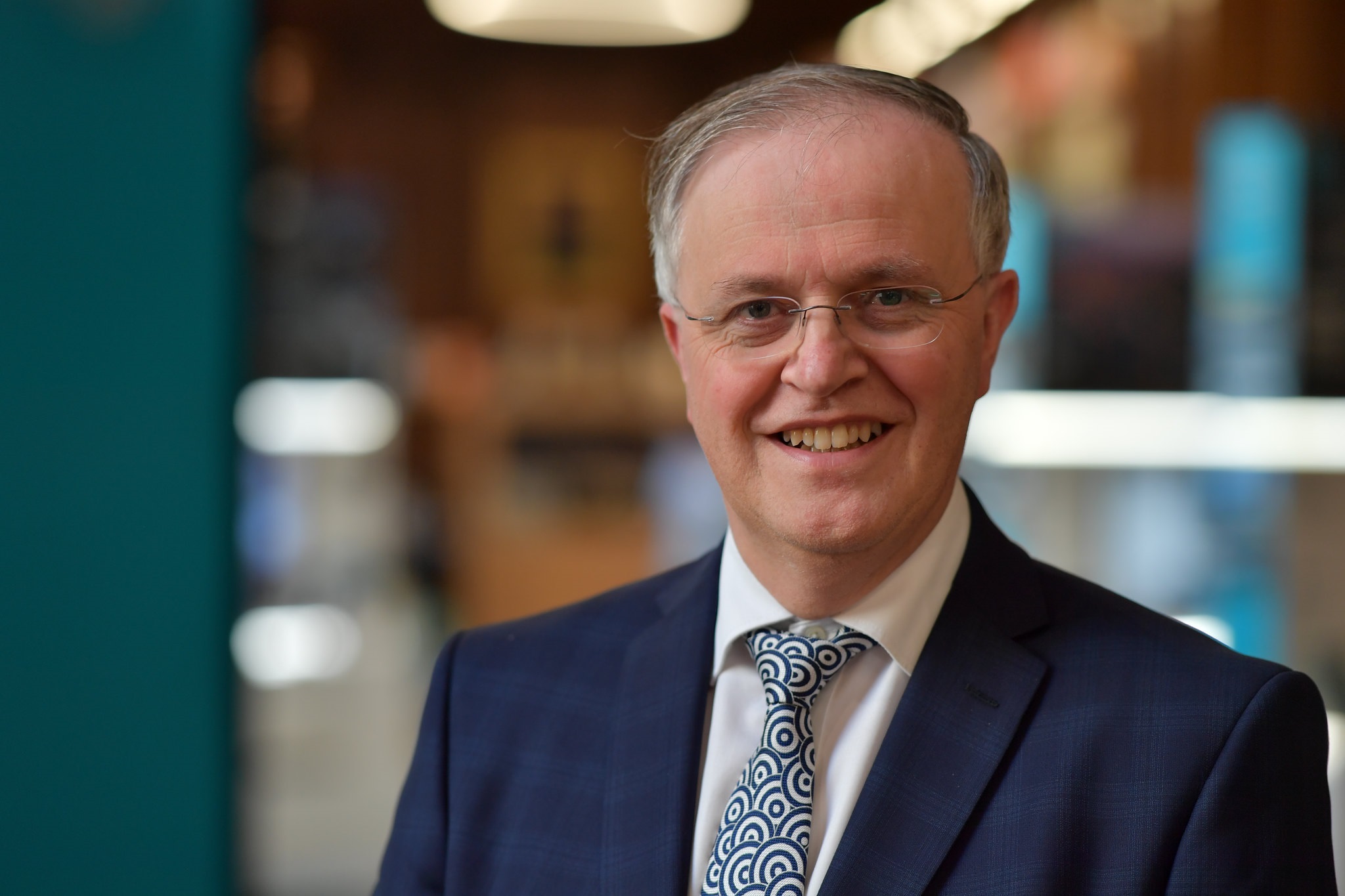 Freight Transport Association has decided to rebrand to raise its profile with politicians, media and the public, as well as ramping up its presence in the air cargo industry, writes Damian Brett.

Wells joined FTA in 2009 in the role of finance and facilities director before moving up to managing director of finance and operations in 2013 and then chief executive in 2015.

Previously, Wells worked in various finance and consultancy roles in the aviation, engineering and construction industries – to name a few.

During his time at FTA he has seen the organisation – and the industry – evolve rapidly, but not wanting to rest on its laurels, the association has some big plans for the coming year.

Level of influence
Since taking up the chief executive role at FTA, membership numbers have grown by 22% to just over 18,000, something Wells attributes to the organisation’s level of influence.

“Our mission is always to achieve more for our members and I have worked closely with the team to ensure we are representing the needs of those we represent at every level of government and industry.

“Our policy team, which now numbers more than 30 people, is one of the most influential of any business group, with contacts at all levels of government.

“The personal relationships they have developed with opinion-formers on all aspects of transport and logistics have enabled us to drive more than 70 quantifiable policy wins – on topics ranging from infrastructure to regulations, recruitment, the environment and the future shape of the industry – in the past year alone.”

One major initiative planned for this year is a rebranding, as FTA changes its name to Logistics UK in May.

Wells says the rebrand is driven by the need to raise the organisation’s profile among politicians, the media and the general public.

“I’ve said to our members we will be the same organisation doing the same things in the same professional way as before,” he says.

“We want to simplify our name so that it does what it says on the tin in order for us to increase our profile.”

“Evolving our name is not something that I or the board take lightly, but it’s something that we believe is essential if FTA is to continue to grow and achieve more for its members in a fast-changing world.”

Another major consideration behind the rebranding is the industry’s move towards multimodalism. Wells hopes the new name will reflect this development.

“The industry itself is becoming much more integrated and more modal agnostic,” he explains.

“Operators are much more focused on getting a product to where it needs to be at the right time and at the right price no matter the mode, rather than specialising in a particular type of transport.

“Reflecting that, the UK government is increasingly saying it would like to have a holistic view of transport across all modes.”

He points out that the UK has created a new ministerial role –minister of state for the future of transport – to oversee the development of the logistics sector in the country.

“This is another example of how the world around us is changing and why evolving our name now will help us to strengthen our voice and our influence,” Wells says.

“FTA is really well known and respected in the industry, but increasingly it’s the people outside our sector, like politicians, young people, who may never have considered careers in our sector, and journalists who will be critical to us achieving even more for members,” he adds.

“It is vital in today’s fast-paced media environment that those stakeholders quickly understand who we are and what we do.
“We need to continue to raise our voice in the media, to give us extra strength with government, and our name is an important part of achieving that.”

To help expand the organisation’s reach, FTA has also set up a supply chain and warehouse consultancy service, and it has recruited a customs expert.

This helps fill a “gap in our portfolio” Wells says, with the experts from these areas able to impart advice and guidance to members, provide thought leadership and a greater understanding of the sectors.

So far, members have welcomed the name change and told the organisation to “get on with it”, Wells says. There has only been one member that wasn’t too keen on the new name, he adds.

The organisation has also been ramping up its presence in air cargo over the past two years and is hoping to attract new members from the industry.

Explains Wells: “We have brought an air cargo training company, we have expertise in dangerous goods by air, we run general security training, we have staff with expertise in airside, we want to sell services to air cargo in the same way we sell to road and we are increasing our policy activity in air cargo.

“I would encourage air cargo members to get stuck in and engage with us. We think that with Brexit, air cargo is going to become even more important and therefore we should be strategically increasing our influence in the area.”

It is not just a change of name and a push in air cargo that has been keeping FTA busy over recent months.

Post-Brexit
The organisation – along with the UK’s other transport groups – has been campaigning to keep post-Brexit border friction to a minimum and is also championing the development of a third runway at Heathrow Airport.

“We argued very heavily for a third runway at Heathrow on the basis of its importance as an air cargo hub – the argument is even stronger if you want to make UK plc a global trading centre following Brexit,” Wells says.

The development of the third runway was recently dealt a blow when the UK Court of Appeal ruled that the plans are unlawful because they do not take into account government commitments relating to climate change.

The ruling addressed a challenge – brought by a number of local authorities, the mayor of London, Greenpeace, Friends of the Earth, and Plan B Earth – to the UK government’s Airports National Policy Statement (ANPS), which was designated in mid-2018.

The UK’s Planning Act requires that the policy set out in the ANPS “must include an explanation of how the policy takes account of government policy relating to the mitigation of, and adaptation to, climate change”, the judgement explains.
The appeal court has ruled that the failure of the policy to address those issues “is legally fatal to the ANPS in its present form”.

Following the decision, the government announced that it would not launch an appeal – something that Wells says did not comes as a surprise – although Heathrow Airport will attempt to have the decision overturned.

“With the advancements in aviation technology and fuel technology, we are confident that Heathrow can demonstrate that it can meet those climate obligations,” he says.

“We will urge the government to press ahead with the third runway, although we know that it has no plans to appeal, and will stress the importance of the project for the UK economy.

“We will also support Heathrow, where we can, to appeal the decision and get its case heard.

“We remain quietly confident that Heathrow can meet and overcome the objections, and that the programme can press ahead.”
An interview with FTA wouldn’t be complete without an update on its campaign to make the UK’s post-Brexit cross-border relationship with the European Union (EU) as frictionless as possible.

In January, the UK government confirmed that there would be no extension to the transitional period.

This means the UK will implement import controls on EU goods at the border from December 31.

Wells outlines FTA’s Brexit focus since the start of the year: “We are trying to educate the government on what the result of any friction will be so that they are motivated to reduce that friction as much as possible.”

FTA has sent the government its “six key asks” for the negotiations and also issues a weekly update on any items that it feels the government needs to take into consideration.

“Over the first two months of the year there were not many developments, but we are starting to see a bit more progress of late,” Wells says.

“Michael Gove [occupying a ministerial role with responsibility for advising the prime minister on Brexit policy] knows the country needs to prepare and that we can’t leave this until December 31.”

Fulfilment
Looking back on the last 10 years, Wells says that his time at the FTA has been fulfilling from both a personal and professional point of view.

“Our work has brought logistics to the forefront of many people’s minds,” he says.

“In that time, the industry has changed beyond all recognition – when I started at FTA, things like autonomous and electric vehicles were in their infancy, while the idea of drone deliveries was a thing of imagination, yet now they are accepted as part of our supply chain.

“I am incredibly proud of what we have achieved as an association in the last decade, but am now looking to the future to ensure that we continue to shape the industry of tomorrow, and get the best possible results for our members.”