From Russia with Lift 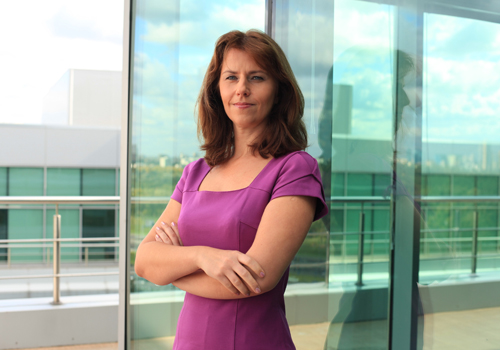 AT A TIME when some in this mercurial business are sounding the death knell for the lifecycle of traditional all-cargo airlines, AirBridgeCargo (ABC) has already distinguished itself not only as a fierce competitor but also as one of the industry’s innovators.
One only needs to look behind Russia’s largest freight carrier to find the source of its evidential success – executive president and chief executive officer (CEO) Tatyana Arslanova.
She has been aptly described as a tour de force by observers who have witnessed the inspired way she continues steer her airline through the prevailing choppy economic waters.
“The market environment is very challenging with the fuel prices,” she confesses.  “However, efficiency and productivity can never be enough to generate revenue and profits for our company.
“In reality, we have not achieved all the targets we wanted to.”
Arguably, the fact that ABC offers an integrator-style service encompassing scheduled and charter operations, together with trucking options to its customers, gives it a strong competitive advantage.
AirBridge’s fleet of 10 Boeing 747 freighters – eight B747-400Fs and two brand new B747-8Fs – transport all types of cargo, including animals, perishables, dangerous and oversized goods.
“We deliver aircraft engines,” explains Arslanova. “This differentiates us from the combination and passenger carriers.”
She continues: “It is about providing additional expertise to transporting outsize products – we have proved what we can do with using a 747F. But there is still room for improvement.”
ABC, established in 2004 under the auspices of Volga-Dnepr Airlines, also boasts that it can ‘significantly reduce’ transit times on flights through its cargo hub in Moscow.
In addition to its own routes, the carrier has entered into interline agreements with other leading scheduled airlines, including Japan’s Nippon Cargo Airlines, Air Canada, Emirates and Cargolux.
Arslanova attests to the importance of creating partnerships within other supply chain members as one way to cut costs.
In this context, ABC’s recent acquisition of a 49 per cent stake in Air Cargo Germany (ACG) is already bearing fruit for both parties.
The shrewd move has allowed the Hahn-based carrier to expand its fleet with two of Airbridge’s Boeing jumbo freighters. Both aircraft are Extended Range Freighters equipped with a nose-loading hatch.
“The aircraft enhance our reach and market options substantially due to their improved range capabilities compared to the B-400SFs and their nose loading door," explains ACG’s chief executive Michael Bock.
They will be utilised for direct flights between Germany and Mexico or to destinations in The Far East, as well as, for transporting outsize, weighty or huge shipments.
Meanwhile, ABC has ceased flying between Europe and North America altogether allowing its new partner to take over this traffic.
Bock continues: “We have signed an interline agreement with ABC for enabling easy transfers of shipments in Moscow and Frankfurt.”
Frankfurt Airport is not only ACG’s second hub in Germany, but also ABC’s main European gateway.
“It has brought synergies and savings in just a few months,” Arslanova reveals. “We will consider setting up more of such partnerships.
Over the last year, she has been focusing on ‘network optimisation’ centring on establishing transpacific routes between Russia and the USA via Amsterdam, which, so far have produced promising results.  Another one bypassing Amsterdam altogether was introduced earlier this year.
The carrier is also in the process of researching how it can continue with its fleet expansion plan amid the economic downturn. Arslanova is optimistic but realistic about how her airline will fare in 2013.
“We expect the first quarter will be tough for us but we expect the second to be to be a little better but it does depend on the Euro,” predicts the Moscow-based CEO.
Arslanova is emphatic about vital it is for the industry to be proactive regarding change.  Technology is high on her agenda, along with improving relationships between members of the supply chain to maximise on saving money.
“We have to find a way to make delivering cargo easier and harmonising procedures including security, e-freight and customs,” she forewarns.
“The only advantage we can provide to our customers is speed. You need to adapt to this environment, it is the key to survival.”
Share this story

Qatar Airways Cargo has continued to head the market in April as volumes hit 900m cargo tonne kilometres (CTK), according…