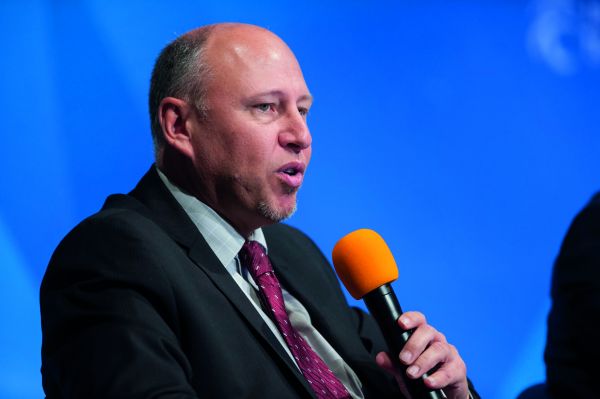 Glyn Hughes has switched roles but not focus following his departure from the IATA. He talks to Roger Hailey about the challenges ahead as director general of air cargo supply chain group TIACA.

Glyn Hughes, with deep air cargo industry knowledge and a great sense of humour that includes painful puns, has joined The International Air Cargo Association (TIACA) in the new role of director general.

Why is he navigating a new air-freight career path when the global pandemic has brought the airline passenger business, and vital bellyhold cargo capacity, to its knees?

“I had been with the International Air Transport Association (IATA) for 30 years and the highly talented cargo team of experts has done excellent work during the Covid-19 pandemic.

“I was head of cargo for six years and my predecessors, Alex Popovich and Des Vertannes, did that role for six years and four years [respectively]. So, there is a timeframe where the world is evolving and perhaps it needs a different skillset and perspective to work with the team and go to the next stage.

“IATA’s voluntary redundancy programme came up and I submitted my application, and it was only when it was accepted that I contacted TIACA. It is nice to challenge myself to go and do something else.”

There is also a sense of relief. Hughes, lead moderator, compere and co-organiser of IATA’s annual World Cargo Symposium (WCS), says: “I’m looking forward to being a man in the audience rather than the man on stage. Somebody asked me what is it like to attend the WCS? I have no idea because I never attended one. I was always behind the scenes running from room to room. But I would like to know what it’s like sitting in the audience listening to the great speakers rather than worrying about what I have to say next.”

Hughes, born in Crawley near Gatwick but brought up in Florida where his journalist father worked for the National Enquirer newspaper, learned early on how to listen when hearing his dad on the radio for the BBC.

Being a good talker and listener have played important roles in Hughes’ airfreight career. He started off as a clerk in the cargo department of British Caledonian. Four years later, the airline was taken over by British Airways, and just three months after that he joined Air Europe, where his cargo tutelage really took off.

“It was when I joined Air Europe that I felt part of the air cargo industry. It was a small team and I had greater exposure to air cargo with a fleet of Fokker100s for package holidays.

“Ray Corsan, the Air Europe cargo manager, put together a team at Gatwick Airport with six people, including Peter Patrick and Phil Rawlings, who ultimately went to Emirates.

“There were some good solid people running cargo and because I was head office and accounts we worked very closely.”

He saw what they could do with relatively small aircraft by being creative. “You don’t just move the box, but you start thinking about what is inside the box and how it affects people. That is when I caught the air cargo bug, from working with those guys.”

Air Europe stopped flying and Hughes answered an IATA job ad for an assistant manager. He admits he knew very little about IATA but recognised the logo, sent in his CV and was offered an interview by Colin Stevenson. Stevenson’s small office was being used that day, so he and Hughes went for a walk along the A30.

Stevenson offered him the job but added that the enthusiastic applicant had been chatting into his deaf ear while the other ear competed with the noise of the road. “I have not heard anything you said, but you talk so much you must know what you’re doing,” Stevenson told him.

Adds Hughes: “Colin was a super guy and the first boss I worked closely with. He was also into technology and helped launch the Cargo Accounts Settlement System (CASS).

“I helped build up the relationship with the airlines and that is when I extended my knowledge of air cargo and where I decided to make it my long-term career.”

There followed long periods in London, Montreal and Geneva with IATA, with Hughes eventually succeeding Vertannes as head of air cargo; the latter’s management style being a key influence on Hughes.

“Des created a different type of environment. He wanted us to become a listening organisation and said that we needed to spend time with the industry, hearing what the issues and the challenges are.

“We needed to understand the direction that the world is going in and use all that intelligence we are privileged to gain as a neutral party by turning it into strategic aims.”

Hughes continued that approach at IATA and will now take the same style to TIACA, a compact organisation with less than half a dozen people in the team.

So, what can Hughes do at TIACA that he could not at IATA?

“IATA has a team of more than 30 cargo professionals setting standards and that is one significant difference because TIACA does not set industry standards. It does not have the infrastructure, the mechanisms or the regulatory surroundings.

“IATA and TIACA share a lot of common areas around sustainability, digitisation and the next generation, but TIACA’s focus is unique because its members come from across the industry, so it should be louder because it is talking on behalf of the entire supply chain from start to finish.”

Another difference is that IATA is a large organisation of 1,500 people and is predominantly passenger focused, reflecting the industry as a whole, and many of its professionals are not cargo experts, they are aviation experts.

“To get cargo positions advocated for takes a little longer because of IATA’s a bigger organisation and you have to get top-level support before it comes down the system.

“So, in some areas, IATA was a little bit slower to react; it is not a criticism but a virtue of the fact that the organisation is bigger, whereas TIACA is a much flatter one.”

Hughes is keen to praise the work of IATA’s Cargo Advisory Council, with up to 18 members, “all airline cargo bosses who are the most knowledgeable and influential high-profile leaders in the cargo industry and they provide tremendous guidance”.

TIACA’s secretariat is a relatively small team based in Miami, so it is much quicker to react to events with advocacy positions.

He adds: “I am looking forward to that accelerated reaction time.”

Hughes will be arriving at TIACA during a time of crisis in aviation caused by the pandemic and a looming global vaccines airlift. What are TIACA’s strategic priorities?

“Whatever happens on this planet, the air cargo industry is involved in some way,” he says.

“The passenger side had experienced non-stop growth for 10 years, from the end of the financial crisis up to the pandemic.”

As a result, the passenger business was not as prepared as its cargo cousin when many flights were suspended in March 2020.

“TIACA will be focusing on trying to maintain a global cargo network while passenger networks will still be significantly down. Until passenger numbers return with those high-frequency pre-Covid 20,000 city-pair connections we will still have to continue flying passenger aircraft in cargo-only configuration and we need to be innovative with the network.

“Freighters with deferred retirements will continue to fly so we know that our industry will find solutions. Whether it has been a humanitarian or civil unrest or natural disaster, air cargo has always been the first responder and nobody in the
industry has ever complained about doing their part.”

Mainstream global media, such as the BBC and CNN, report that airlines are preparing themselves for the global uplift of vaccines around the world. This has put shy and retiring airfreight in the public spotlight.

And while the airfreight industry “has never waved the flag of self-congratulation”, Hughes says that the world and governments now see the value of air cargo to the global economy and its vital role in moving life-saving products.

“Air cargo is just like football players: when it rains, they still go out and train and play the game in shorts, even if it starts snowing. Whatever the weather, our teams get on with the business.”

It could be argued that one key team member needs to get off the subs bench.

Apart from the “freighter and cargo-friendly” hubs around the world, airports generally see passenger terminals as money-churning shopping malls and restaurant areas, with logistics providers regarded simply as tenants and cargo infrastructure as a property asset not worth long-term investment. Can that change?

Hughes says that airport representative body Airports Council International (ACI) has been in touch with TIACA and that to gain greater engagement with airports, the air cargo industry needs to change its argument.

“The value of air cargo moved every year is $6trn, which is more than the value of tourism. So, the value to a country of people coming in and spending money is not as high as the value of the cargo they are sending to the outside world via airfreight.

“To get airports to focus on cargo’s economic value we need to bring a different argument. We need to bring more of the societal argument and we also need to educate an airport that if it does invest in a cargo product it will create an infrastructure and good connectivity that will help them diversify. The past 10 months have shown that airports with an income based on 95% passenger revenues are struggling.

“But if you have a good sectoral balance between low-cost airlines, cargo and traditional full-service carriers, you can diversify and be much more cushioned from an economic shock.”

He continues: “In the future you might find that generation Z views flying differently, which may affect passenger numbers.

“The year 2024 will be a different world from 2019 and in a five-year gap there will be technology leaps.

“Zoom meetings were not possible five years ago and that may reduce business class travel. We will always travel for leisure because we want to experience new cultures, but some business meetings may come under challenge.

“It is important that we work with airports, and I am encouraged by the way ACI has reached out.

“TIACA is well-positioned to lead here because it has a number of strong airports within its membership and on the board and we will take our message to other airports, to create a network of globally connected hubs of leading airports based on cargo quality and expertise.”

Lastly, one of Hughes’ trademark punster jokes: “A truck carrying 10 tonnes of strawberries to an airport shed its load, which was crushed by other vehicles, causing a massive traffic jam.”

Click here for the full issue of Air Cargo News