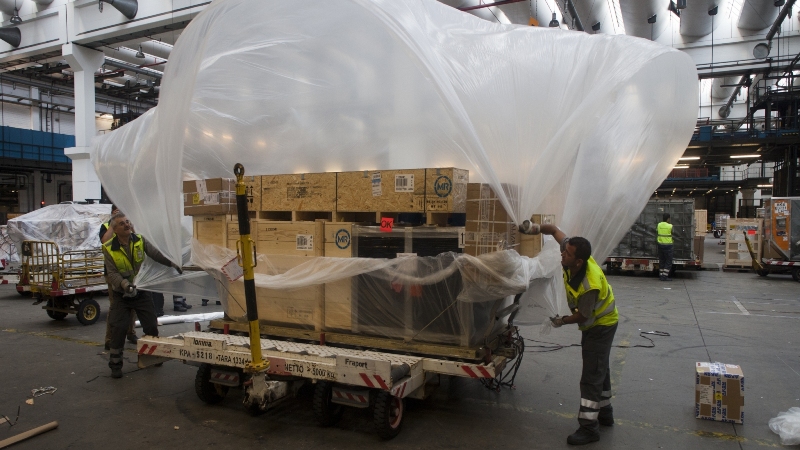 Lufthansa Cargo is hoping to reduce the amount of plastic it uses by adopting a new film to wrap cargo.

The airline said that starting in mid-September, it will become the first cargo airline to use a new type of film that consists of 10% recycled plastic and is also one micrometer thinner than previous films.

This will result in a saving of around 2 kg of film on each cargo flight. The carrier currently uses around 500,000 kg of plastic film each year.

Dorothea von Boxberg, chief executive of Lufthansa Cargo, said: “Plastic waste has become a major problem for the environment worldwide. We are therefore particularly concerned to reduce our need for plastic and to use it in a way that conserves resources.

“In our sustainability strategy, we follow the guiding principle ‘Every Action Counts’. Every step we can take to make airfreight logistics more sustainable is important to us – in the air as well as on the ground.

“We are particularly pleased to be the first cargo airline to be able to use a more environmentally friendly film in the transport of our freight after many tests at selected stations and good cooperation with our specialist departments, our waste disposal company and our film producer. This brings us a step closer to our goal of using our plastic film in a circular way.”

The airline is also operating a closed-loop for its recyclable plastic material.

In Frankfurt, the cargo carrier is working together with its local waste disposal company and film manufacturer Verpa Folie Weidhausen to collect the approximately 400,000 kg of used film per year in Frankfurt that is no longer needed after a transport, to have it processed into granulate, and to have it incorporated into new film as a recycling component.

Lufthansa will also try to increase the recycled content of its plastic film to 30% by 2025 and has also established the re-use of plastic film as standard practice.

The company is also hoping in the future to use biodegradable film that breaks down if it ends up in a landfill.

“They will be completely degraded in a natural way within eight to ten years thanks to special enzymes that stimulate the decomposition activities of bacteria many times over – without creating micro plastics,” the carrier said.

Lufthansa Cargo’s emissions-reduction targets have recently been validated by the Science Based Target Initiative (SBTI) to bring its commitments in line with the United Nations’ Paris Climate Agreement.