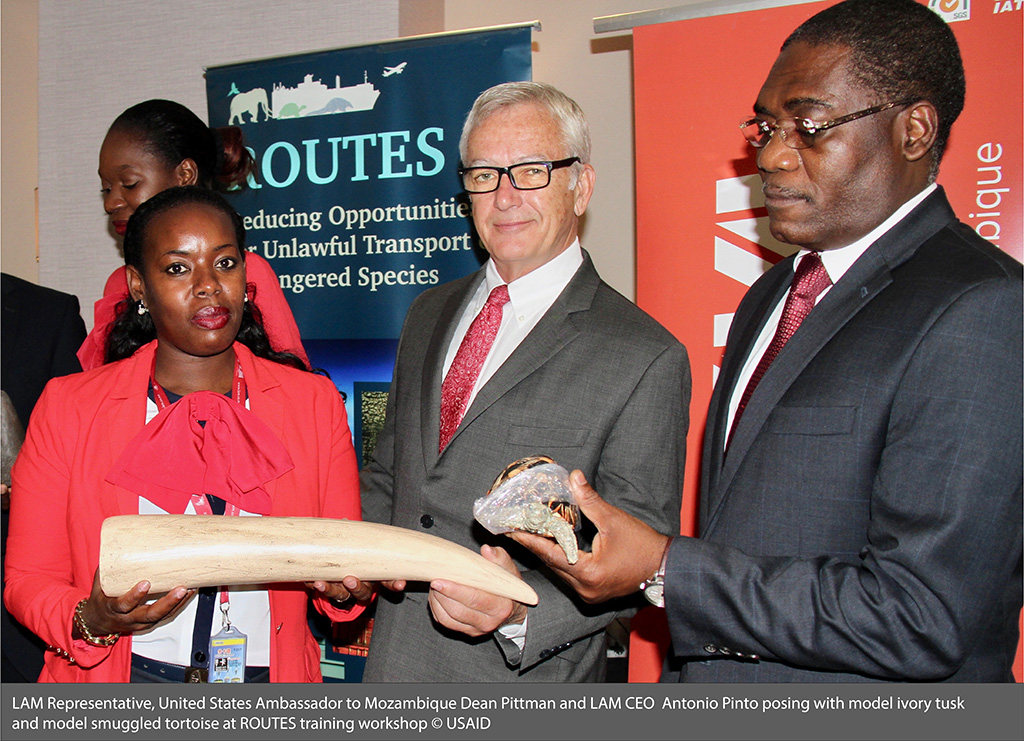 The campaign to prevent wildlife trafficking from Africa saw two training workshops held in Mozambique and Kenya, with further workshops planned throughout the continent.
The USAID Reducing Opportunities for Unlawful Transport of Endangered Species (ROUTES) partnership delivered a training workshop in Nairobi for airline staff on the key role they play in preventing the trafficking of wildlife.
The training is designed help detect and stop smugglers carrying ivory, rhino horn, and other wildlife products out of Kenya.
According to a ROUTES report analysing wildlife trafficking in the air transport sector, Kenya serves as a “significant transit point” for poachers and traffickers supplying wildlife products to Asia.
Kenya’s first lady, Margaret Kenyatta, attended the morning sessions, alongside Robert Godec, the US Ambassador to Kenya.
Said Godec: “Wildlife trafficking is one of the most prominent transnational organised crimes in the world, ranking along with drug, human, and arms trafficking in annual value.
“Wildlife traffickers exploit global transportation, threaten human health and security, and are driving some species to extinction.”
Jomo Kenyatta International Airport (JKIA) is the busiest airport in East and Central Africa and is a target for wildlife trafficking, particularly ivory trade, according to ROUTES. It added that the Kenyan authorities are proactive in addressing wildlife smuggling at JKIA, often seizing illegal products at the airport.
“Wildlife trafficking is a transportation-intensive activity and smugglers carrying illegal wildlife and wildlife products need to interact with airport and airline staff at multiple points during the journey,” said Michelle Owen, ROUTES Lead.
She added: “Increasing the ability of staff to identify and report suspicious activities linked to wildlife trafficking is crucial for stopping traffickers that abuse the transport sector.”
The training in Nairobi was part of a series of training workshops that ROUTES will conduct for airport and airline staff this year at key wildlife trafficking hubs across Africa and Asia. ROUTES will hold training sessions in Uganda, Malawi, Ethiopia, and Malaysia.
ROUTES also delivered a training workshop in Maputo for cabin crew, ground handlers, cargo processors, and other regional airport staff who learned how to detect and stop smugglers carrying ivory, rhino horn, and other wildlife products out of Mozambique.
According to ROUTES, Mozambique serves as a hotspot for poachers and traffickers supplying wildlife products to Asia, particularly ivory and rhino horn.
As the elephant population in Mozambique continues to suffer huge losses to poachers, many in the transportation sector are recognizing the need to take action.
“Airline staff spend more time with passengers, their baggage, and cargo shipments than customs officers,” says Jon Godson, IATA’s Assistant Director, Aviation Environment.
“They can provide a key source of intelligence for the enforcement agencies.”