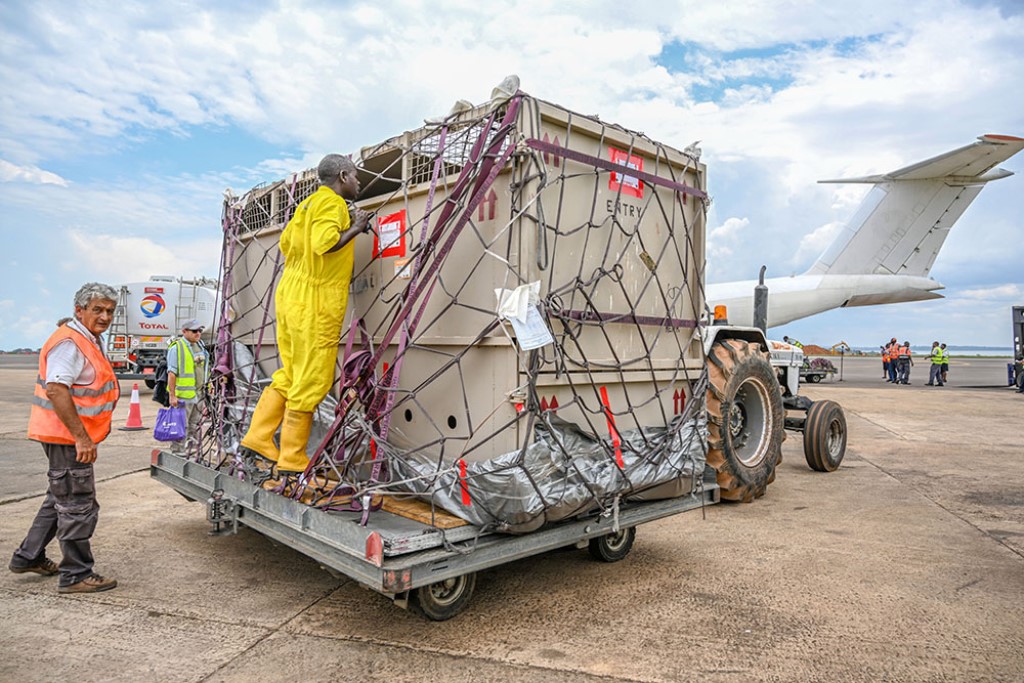 Intradco Global and Qatar Airways Cargo helped transport an eight-year-old black rhino from a San Diego Zoo to Tanzania as part of a breeding programme.
The logistics project to move Eric was co-ordinated by Intradco Global on behalf of the Singita Grumeti Fund – a non-profit organisation carrying out wildlife conservation and community development work in Tanzania.
The bulk of Eric’s journey was completed using Qatar Airways Boeing 777 and Airbus 330 freighters, with the rhino travelling in a special pallet containing his feed and water.
He was accompanied by a specialist team of four attendants, including a wildlife veterinarian and a veterinary technician and rhino habituation expert.
The temperature on the aircraft was carefully controlled at all times to ensure the animal did not overheat or become stressed.
The route halfway around the world took Eric from Los Angeles (LAX) to Liege (LGG) and on to Doha (DOH), where he was transferred to a second Qatar Airways Cargo aircraft for his onward journey to Entebbe (EBB).
Upon touching down in Uganda, the rhino was carefully moved to a chartered AN-74 aircraft for the final flight leg to the Serengeti National Park.
Intradco was required to source the aircraft at short notice when a Hercules contracted for the flight broke its windscreen, putting the whole project schedule in jeopardy.
After spending his entire life at the San Diego Zoo Safari Park, Eric was selected to move to Tanzania to play a starring role in a breeding programme designed to help save the critically endangered species from extinction.
Intradco’s project manager Tom Lamb said: "To ensure his safety and minimise stress, Eric was given extensive training to familiarise him with the crate ahead of the flight. We also made sure his catering was top notch, with an array of treats including rhino biscuits, apples and watermelons to keep him fed, hydrated and happy throughout.
“He arrived looking fresh and ready for action and we wish him all the best in his new home. His new girlfriend is nine years his senior so he’s definitely going to have his work cut out – but he walked away with a confident swagger and we’re backing him to deliver.
"It wouldn’t be cargo aviation without a last minute drama, and when news of the Hercules damage reached us we were working around the clock to find a replacement aircraft for the final leg. Fortunately the AN-74 we sourced proved to be the perfect replacement.”
If successful, Eric will be pairing with a female called Laikipia who was transferred to the Serengeti from an animal park in the UK over a decade ago.
Her male companion was killed in a fight with a bull elephant in 2009 before she could produce a calf, so the long search for a new partner began.
Read more animal transportation news