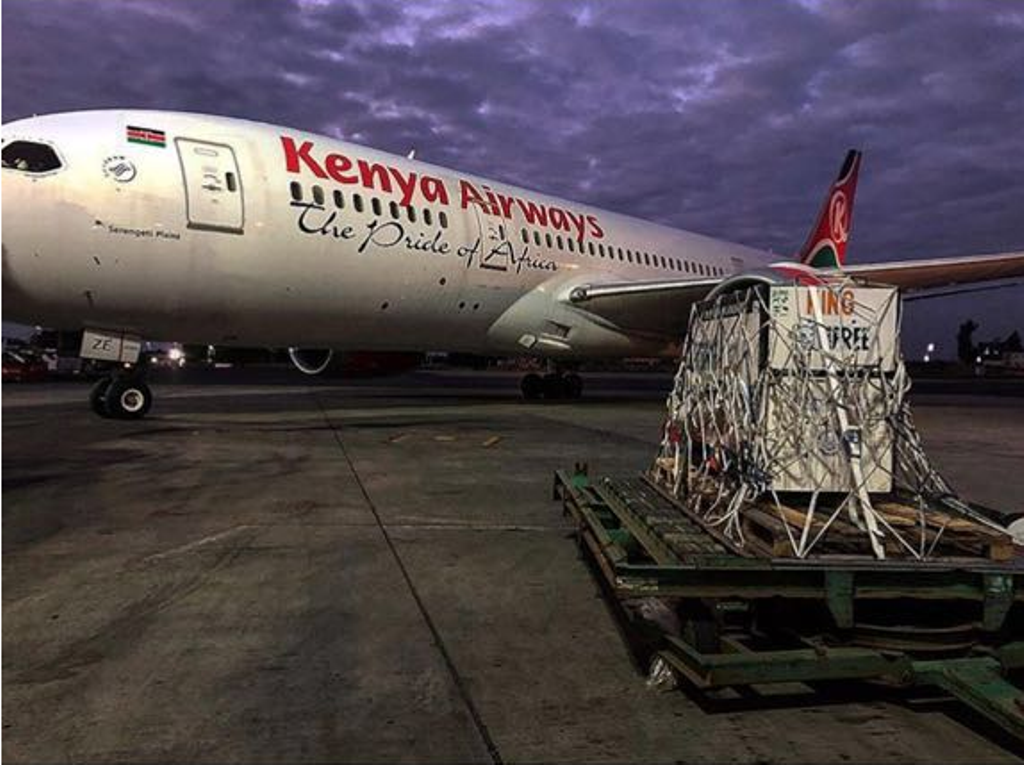 Kenya Airways has partnered with an international wildlife charity, Born Free, to airlift a one-year-old lion cub to the Big Cat Rescue Centre at Shamwari Private Game Reserve in South Africa.
The cub, called King, was rescued from an apartment in Paris last summer where he was being kept illegally as an “exotic pet” in appalling condition, Born Free said in a statement.
King started his journey from Natuurhulpcentrum rescue centre, Belgium, on Thursday last week. From Belgium, he travelled under the care of Born Free’s expert team to London Heathrow Airport for a flight to Johannesburg, courtesy of Kenya Airways.

Charter broker Air Partner was tasked with transporting the big cat from Johannesburg to Port Elizabeth on a chartered aircraft, from where he made the hour-long journey to Shamwari.

Air Partner’s freight team was on hand at all times to assist with the complex custom clearing process in Johannesburg and ensure a smooth transition from King’s initial commercial flight on Kenya Airways to the chartered Beech 1900 for the next leg of his journey.
The turboprob was chosen for its suitable cargo size, which allowed two vets to travel alongside the lion with access at all times. Ensuring the safe loading and unloading of King was paramount, as was his health and welfare.

He touched down in Port Elizabeth, South Africa, before travelling the short distance by road to Shamwari and to his new home at Born Free’s Jean Byrd Centre.
Katrina Hanson, Kenya Airways’ area cargo manager, said: “We are delighted to assist in King’s amazing relocation to Born Free’s Big Cat Rescue Centre at Shamwari in South Africa. This is in line with our policy to support the fight against illegal wildlife trade and crime. This cat’s population is steadily decreasing in the wild. In just two decades, Africa’s population has decreased 43 percent and it is estimated that as few as 23,000 remain.”
“We have worked with Born Free for many years carrying rescued lions from Europe to Africa so they can enjoy being a lion.
"These relocations have been a great success and we do all we can to make it as stress free as possible for the lions.
"The ‘Arc’ facilities at Heathrow are fantastic for animal welfare from the smallest and domestic, to the mightiest of beasts! We were delighted to have King on board,” she added.
Chris Draper, Born Free’s Head of Animal Welfare & Captivity, added: “It is staggering that, in 2018, lion cubs are still finding their way into the pet trade in Europe.
"We are concerned that King’s case is the tip of the iceberg, and that a great many wild animals are being kept illegally as pets across Europe and elsewhere. This situation needs to be addressed urgently, and we hope that by introducing the world to King – his plight, his rescue and his rehoming to lifetime care – Born Free can draw attention to this important issue.”
Read more animal transportation news
Sign up to receive Air Cargo News direct to your inbox for free