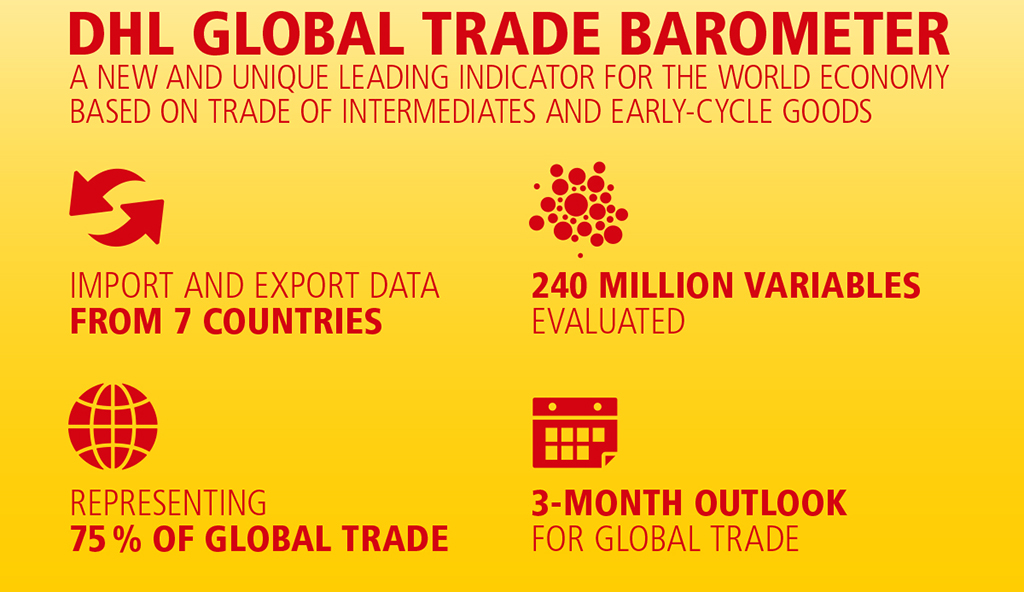 Airfreight’s global outlook has decreased slightly in the latest DHL Global Trade Barometer, although the prospects for air cargo remain “very positive” at 70 points, well above the “stable” benchmark of 50.
Overall, the positive outlook for world trade has continued to improve according to the barometer, which launched in January this year at 64 points.
The barometer increased to 66 points in March which “continues to signal solid positive growth for global trade within the next three months,” said DHL, adding: “Furthermore, the increase indicates that growth is gaining momentum.”
In a breakdown by transport mode, developments in the air and containerised ocean trades were “slightly contrasting,” stated DHL.
“The global air trade outlook drops slightly by one point compared to January, but remains very positive at 70. The outlook for global air trade is pushed downward, as particularly German and South Korean air trade growth is expected to slow down. On the upside, air trade growth in China and the US is expected to accelerate.
“Meanwhile, the outlook for global ocean trade improved to 63 points in March from 60 points in January. This growth is also driven by the US and China, together with a strong increase in South Korea, offsetting a slightly reduced growth outlook for UK and German ocean trade.”
The “good prospects” for overall global trade were reflected in an increase in trade activity for each of the seven constituent countries.
Said DHL: “Compared to the findings in January, the improved global index is mainly driven by an increasingly positive outlook for Korean and US trade. In contrast, the prospects for German trade eased after the strong peak seen in 2017.
“India continues to show the highest index value of all seven countries for the overall trade predictions, while the UK, after a modest decline since January, scores the same level as China at the lower end of the country ranking.”
The DHL Global Trade Barometer is based on large amounts of logistics data that are evaluated with the help of artificial intelligence. The indicator has been developed in co-operation between DHL and IT service provider Accenture. It is published four times a year. The next release date is June 27, 2018.
The barometer provides a global index value as well as individual country-by-country predictions. It takes into account trade flows of early cycle commodities and intermediate goods from seven countries up to 10 industries.
Predictions for the coming three months allow early identification of turning points in global trade dynamics and economic growth.
To learn more about the DHL Global Trade Barometer, visit dpdhl.com/gtb