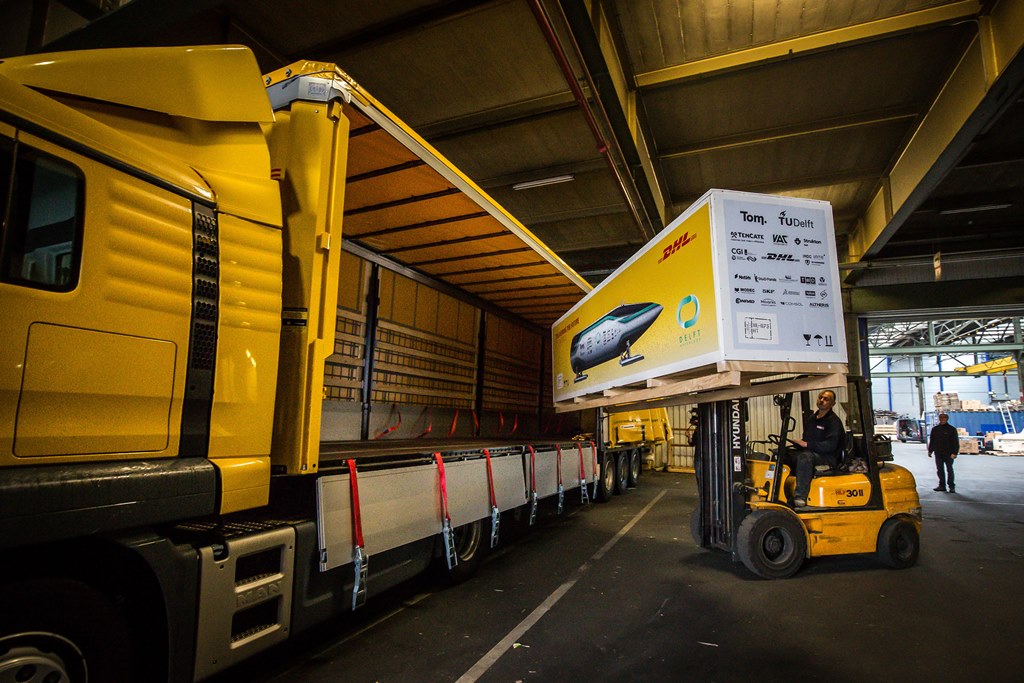 The Delft Hyperloop capsule, a futuristic mode of transport for people and cargo, will rely on good old airfreight to make its way from Europe to the US.
The Dutch university developed system, which uses low pressure tubes to transport people and goods at high speeds, is being transported to California on a DHL freighter aircraft as part of the hyperloop pod competition organised by entrepreneur Elon Musk’s SpaceX project.
DHL said the dedicated intercontinental transportation move involved a number of specific challenges.
“The cross-border shipping of the original, high-quality technology, built with magnets and batteries, was enabled by DHL’s specific customs expertise and in-depth knowledge of air cargo regulations. A special flight case helped ensure a safe and smooth crossing for the Delft Hyperloop prototype.”
In January, the team of students will defend their invention in the finals of the competition, which aims to encourage the development of transport through tubes.
DHL Express is transporting a prototype of the capsule, safely encased in a specially designed flight case. A team from TU Delft is traveling with the capsule to make the final preparations on location for the finals of the SpaceX Hyperloop Pod Competition.
DHL Express chief executive Ken Allen said: “We hope that DHL has inspired them with our own logistics performance today and that we have made a contribution to their future success in the SpaceX Hyperloop Pod Competition.”
The capsules in the competition are half-shell prototypes and therefore still unable to accommodate passengers. Using light and strong carbon fiber, the Delft capsule weighs only 149 kg and is about 4.5 m long and 1 m high.
The prototype can attain a speed of 400 km per hour on the 1.6 km test track that is being constructed adjacent to the headquarters of SpaceX in California. In longer tubes, the Delft prototype can reach up to 1,200 km per hour.
In addition to the physical transportation, DHL also contributed to the feasibility of the concept and the selection of an economic model.