Cargo traffic at some of Europe’s major combination carriers declined in June, a reflection of the strong market this time last year and a general slowdown in trade on major lanes.
Europe’s largest cargo carrier group, Lufthansa, saw cargo traffic across its airlines decline by 0.6% in June to 913m revenue cargo tonne kms.
With capacity increasing faster than demand, its cargo load factor also suffered, slipping to 65% from 68.8% during June last year.
It is the first time this year that the airline has seen cargo traffic decline and over the first half demand is up by 2.9%.
IATA said demand growth at European airlines has slowed over recent months, reflected in a slowdown in North American and Asian trade lanes.
There was a similar performance at IAG Cargo where traffic declined by 4.3% year on year in June to 458m cargo tonne kms, led by a decline at British Airways.
Click on chart for interactive version 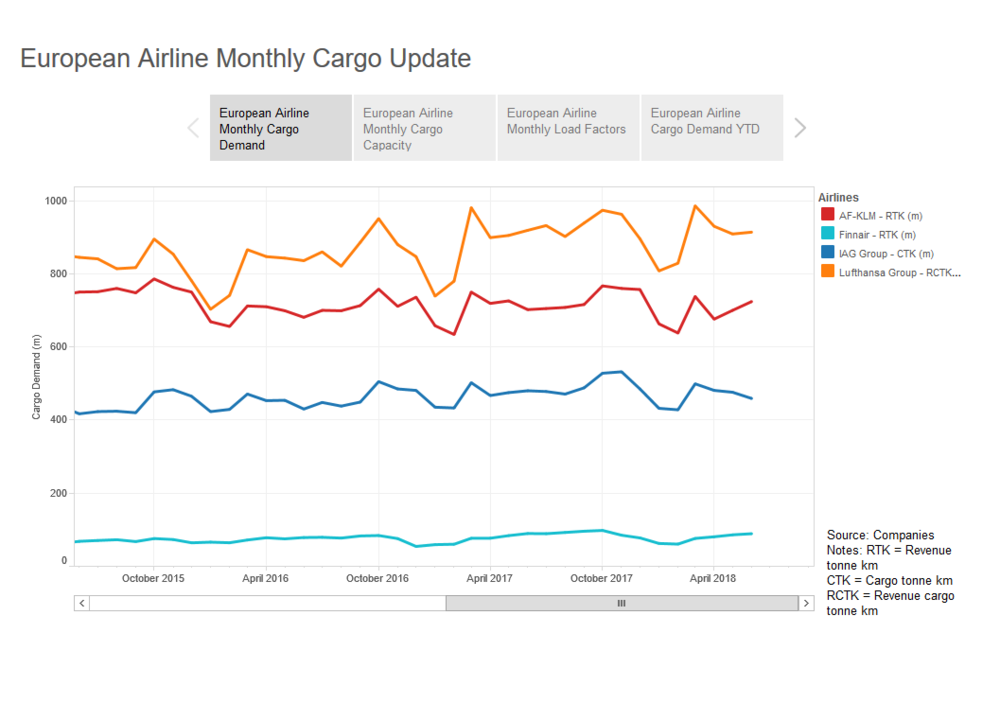 This is the biggest year-on-year percentage decline registered by the airline group so far in 2018, while traffic over the first six months has declined by 0.6%.
It should be pointed out that last June was particularly strong for the airline as demand for fidget spinners, new services and IT issues in June propelled it to a double-digit percentage increase.
In contrast, Air France KLM saw cargo demand increase during the month, with a 3.2% year-on-year increase pushing traffic to 723m revenue tonne kms.
This is the airline group’s biggest traffic increase of the year so far and compares to a decline of 1.4% over the first six months of 2018.
Over recent years the airline has been reducing its freighter fleet, which has had an impact on year-on-year comparisons.
Finally, Finnair saw its cargo volumes decline by 0.5% in June to 88 revenue tonne kms, while capacity increased by 19% due to the use of larger aircraft.
As a result, its cargo load factor slipped to 60.3% compared with 71.8% this time last year.
“Cargo flight volumes decreased from the comparison period, when Finnair rented cargo space from Japan Airlines,” the airline said.
Read more air cargo data news
Sign up to receive Air Cargo News direct to your inbox for free