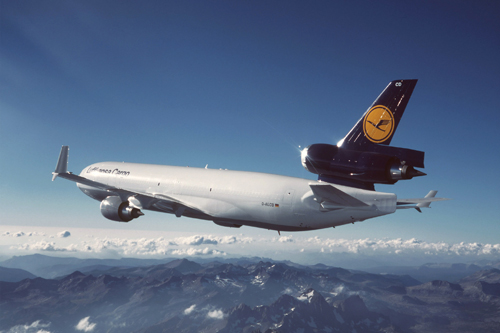 LUFTHANSA Cargo (LC) scaled back capacity by 7.4 per cent and raised aircraft utilisation during the first quarter of 2013.
Since sales fell by 5.9 per cent, the load factor improved by more than one percentage point to 71.4 per cent, according to a company spokesman.
LC transported about 400,000 tonnes of freight and mail in the first quarter of the year – a decline of 7.2 per cent compared with same period last year  – but the all-cargo carrier expects to see demand strengthen during the remainder of the year.
“We intend to utilise market opportunities and grow profitably again. To that end, we are investing in our route network and making our services even more attractive to customers,” enthuses chairman and chief executive officer, Karl Ulrich Garnadt.
In March this year, LC established twice-weekly connections to Guadalajara (Mexico) and slightly increased services to China in its summer flight schedule after previously reducing capacity on the route. The carrier is now operating additional weekly freighter flights to Shanghai and Hong Kong.
Share this story