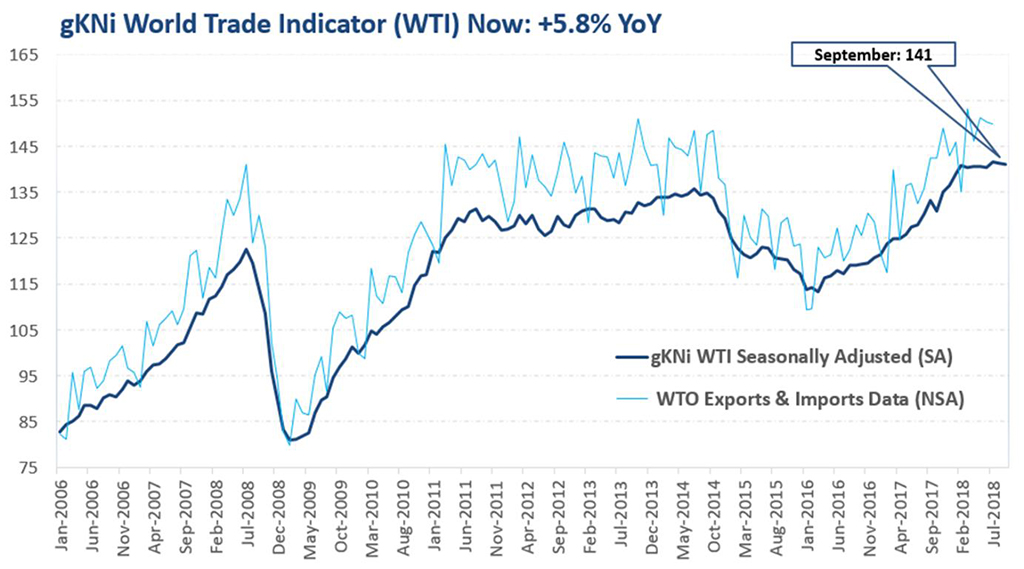 Europe was the laggard trading region in September while North America was “still going strong” according to the gKNi World Trade Indicator powered by LogIndex AG ,the data company of global freighter forwarder Kuehne+Nagel.
The gKNi World Trade Indicator stood at 141.0 (+5.8% YoY) at the end of September, down by 0.3% compared to the previous month.
The third quarter saw an increase of 0.5% (quarter on quarter) compared with increases of 0.4% in the second quarter and 4.4% in the first quarter.
The World Trade Indicator is a US dollar value indicator influenced by inflationary pressures, in particular higher energy prices.
The latest report from gKNi stated: “World trade has recently been strong in North America (+9.1%), Central and South America (+9.4%). The Asian region, which experienced a vibrant growth in the first half of the year, is now less dynamic. Foreign trade in South Korea was negative in September. Overall, Europe was the least dynamic.”
World trade rose 5.8% year-over-year (YoY) in September (August: 8.7% YoY). Australia and Canada recorded the highest annual rates. South Korea, Italy and UK are “on the bottom of the list,” stated the latest report.
It added: “The trends in trade balances (exports minus imports) based on the latest forecasts of LogIndex  signal a worsening of existing deficits in the US, UK, Canada, France, India, Japan, Mexico and Sweden.”