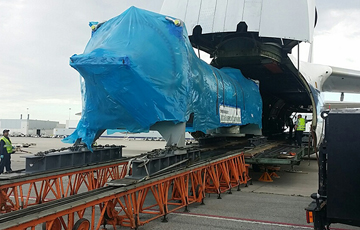 RUSLAN International – the joint venture which manages and markets the 17-strong fleet of An-124 aircraft belonging to its shareholders Antonov Airlines and Volga Dnepr Airlines – delivered this 79-tonne shipment of ethanol production equipment in time for a VIP opening ceremony in Brazil.
The cargo – for a new ethanol production facility – was originally intended to be transported by sea.
But in order to be on time for the opening ceremony, attended by the country’s president and other VIPs, the only solution was to fly it from Toronto to Viracopos.
The entire process of flight booking, cradle design and fabrication, delivery to exporter, permit applications, aircraft positioning and flight departure were all performed by Ruslan International in the space of five days (including a weekend) from first notification.
The heaviest individual piece weighed in at 58 tonnes and measured 13m x 3.15m x 3.8m.
The project was performed in cooperation with Fly Easy, a charter broker based in Brazil.
Ruslan International commercial executive Paul Bingley notes: “To accommodate this urgent request we successfully exploited the full range of expertise which Ruslan International can bring to bear in such demanding situations.”