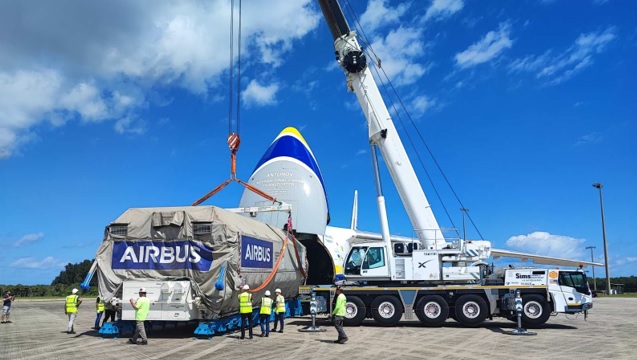 Antonov Airlines in cooperation with Bollore Logistics Space has transported a satellite onboard one of its AN-124-100-150 aircraft from Toulouse, France, to Nasa Shuttle Landing Facility in Florida US.

Yorann Marc, projects department manager, Bollore Logistics, said: “As permanent users of this type of aircrafts, we are pleased to welcome the “Ruslan” on the market to perform the sensitive transports like the movement of the satellites to the different launch pads.

“The communication channel stayed always active in last months, and we were impressed by Antonov Airlines agility to maintain continuity of service after painful events occurred their home-base in Hostomel.

“We would like to thank Airbus Defence And Space for their renewed confidence in the competence of Bollore Logistics for moving their critical equipment in accordance with highest standard of security.”

“The expertise of the Antonov Airlines technical crew and engineers guarantees the smooth and efficient transport of this delicate and unique cargo,” added Sergii Bilozerov, commercial executive, Antonov Airlines.

“An external crane in conjunction with the onboard crane and winch of the AN-124-100-150 was used to load and unload the container CTH04, as well as special loading equipment designed and manufactured by Antonov’s in-house engineers.”

Antonov Airlines is a Ukrainian state-owned enterprise that operates a fleet of cargo aircraft including five AN-124-100 “Ruslan” aircraft, one with a payload of up to 150 tonnes.

Antonov Airlines’ home base at Kyiv-Antonov airport in Hostomel has been destroyed as a result of the Ukraine-Russia war. The airline relocated its fleet of AN-124 aircraft to Leipzig/Halle Airport, Germany in April.