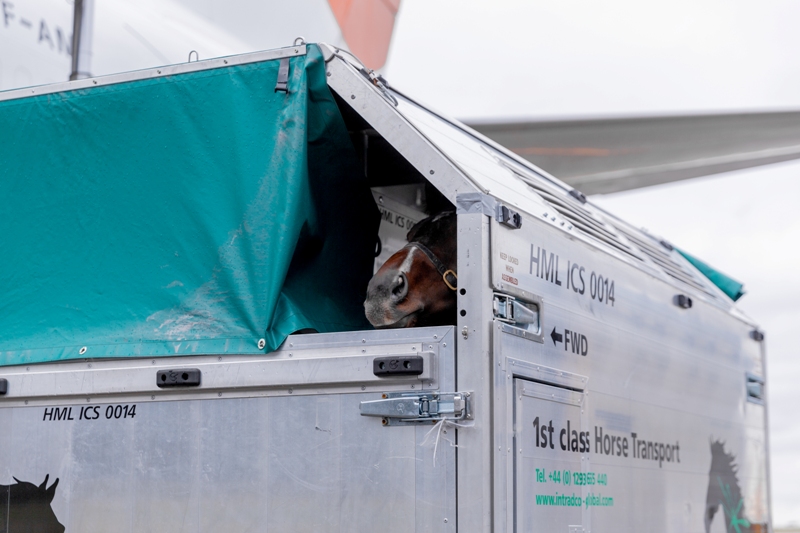 The COVID-19 pandemic has presented many challenges when it comes to the transportation of horses, but the industry continues to innovate in order to meet demand, writes Megan Ramsey.

Perhaps the most eye-catching story relating to equine transport of late was the movement of 316 horses from Liege to Tokyo – and 323 on the return journeys – for the Olympic and Paralympic Games, on a series of 16 Boeing 777 Freighter flights operated by Emirates SkyCargo.

Alongside the horses, the carrier also transported 157 grooms, 160 tonnes of equipment and 336 horse stalls on the charters. The final return flight landed at Liege on September 2.

Wilfred D’Souza, manager cargo scheduling and planning, Emirates SkyCargo, says: “We worked with our specialist horse transportation partner, Peden Bloodstock and with the Fédération Equestre Internationale (FEI) over an 18-month period leading up to August 2021 to ensure that the horses would travel in a comfortable and stress-free environment. It was vital that they arrived in Tokyo in peak condition ready to perform their best for the games.”

According to the FEI, the horses underwent a 60-day health surveillance period and a seven-day pre-export quarantine before departing for Tokyo. Each had an export health certificate and they were all checked over by veterinarians prior to boarding.

However, D’Souza says: “With long-haul transportation of horses, providing for the wellbeing of the animals is about more than just complying with regulations. Alongside the horses we transported 20 tonnes of in-flight food and drink for them, along with 100 tonnes of special equipment for the onward journey from Liege.”

Although Emirates SkyCargo has extensive experience transporting horses across six continents, this was the first time that its team at Haneda airport would handle multiple horse charters, so extra preparations were necessary to ensure a smooth arrival, unloading and loading experience.

As with all cargo operations, it was vital to coordinate with internal stakeholders to secure the required crew, loadmaster and the aircraft as well as planning schedules and slots. Other elements included securing high-quality stalls, arranging portable oxygen bottles, and providing catering and e-tickets for grooms (on which, more later).

Horses are moved for a variety of reasons, such as races, breeding, competition, relocation or training in different climates.

At its simplest, there are a few basic elements involved in horse transport, whatever its purpose: loading (which falls to the ground handler or an agent such as Intradco); the flight itself (involving the airline and the ULDs); and offloading (back to the handler or agent).

All of these are regulated, with processes and certifications in place. What is not mentioned, though, is the groom – whose expertise is the most important factor in ensuring horse flights go smoothly.

Martin Atock, managing director at Peden Bloodstock, agrees, and highlights just why experienced, qualified grooms are so important. “Regardless of breed or purpose each horse is a unique individual and needs to be handled accordingly,” he says.

For instance, a weanling flying overseas for the first time is very different to a gelding that is already a seasoned traveller; some horses are more nervous than others, and some need a ‘buddy’ horse to help them stay calm during their journey. Yearlings can have quite a temper – and grooms must be able to handle that.

“You need to have the right personnel to identify issues before they occur, so that they never do,” Atock continues. “Experienced grooms will pick up signs on the ground and manage the horses accordingly so that there are no problems during the flight. We treat the horses we transport like our children – they can’t ask for what they need, and their welfare is our responsibility.”

Increasingly, shippers and clients want someone of their choosing to fly with their horse(s) even though that person may have no proven experience of doing so.

“You do hear of problems with inexperienced flyers, especially when they’re accompanying several horses on their own,” McMullen observes. “There should be regulation for grooms. IATA’s live animal certification focuses mainly on ground handling agents, covering issues like cargo acceptance procedures and efficiency – but not the welfare of the horses.

“Fortunately, airlines are focusing more on equine transport now. They’re starting to employ full-time live animal specialists and dedicating more attention to the product. [They are] developing a better understanding of what is required.”

Some airports are also specialists and have invested in animal lounges. Standards are continually improving as airlines modernise their fleets and airports modernise their facilities – but on the whole, improvements to the equine travel experience need not involve high costs.

Simple, common-sense adjustments to processes, such as having animals arrive closer to their loading time to minimise the time they spend waiting at the airport, can make a big difference to the travel experience for horses.

“The welfare of horses depends on who’s putting their itinerary together, and whether they are using the best aircraft, the best quality stalls, and ensuring the animals have enough water and good airflow during their flight,” Atock says.

The choice of route is also important, he says, as a direct flight is far preferable to multiple stops and transfers, and keeping horses waiting is to be avoided.

Another problem is the lack of young grooms coming through. Some type of formal training would help redress this, McMullen feels. “There’s clearly a demand for it – Intradco receives many enquiries from people wanting to learn.” 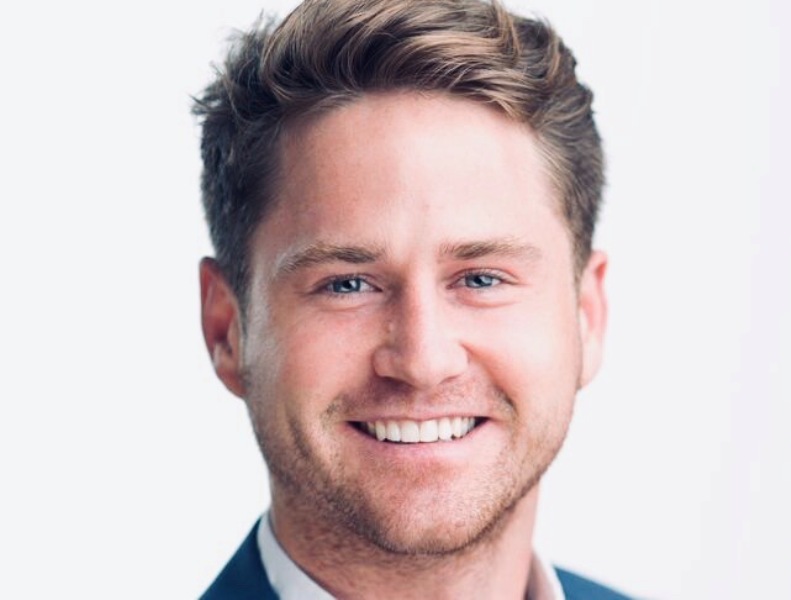 That training and certification should also cover the selection of equipment used in equine transport. Show jumpers and dressage horses tend to need larger stalls, for instance, to allow them more head room.

Developing a standardised equine transport training programme for the industry would require input from across the industry, however, this is something that could be an arduous task given that the horse transport sector consists of numerous small, specialist businesses and is therefore quite fragmented.

This fragmentation also poses complications for the digitalisation of the sector, McMullen says. “Digitalisation could allow us to share information more quickly, just like the rest of the airfreight industry, resulting in operational improvements. The fragmented nature of the business means that it will be a while before digitalisation spreads widely in the sector, though.

“It would be great if things like air waybills, health manifests, CITES documents and so on were all under one roof but at this stage, that would be asking a lot because the various regulatory bodies don’t all talk to each other.”

Atock describes digitalisation as “paramount for equine transport” and adds: “The information is all available and can all be managed online. By sending it in advance we can prevent wait times and get horses to their final destination more quickly than passengers.”

There is certainly room for improvement – the post-Brexit friction between the UK and EU with regard to cross-border transport and equine ID being one example.

Owners must pre-notify border authorities of the movement, pre-export isolation and residency requirements must be met, export health certificates are necessary and the animals must move through a Border Control Post (BCP) set up to inspect horses.

Furthermore, the EU’s new Animal Health Law that came into force in April requires horses moving between Great Britain and the EU or Northern Ireland to be tested for certain diseases before export and have particular equine identification documents.

The Sanitary and Phytosanitary checks that now apply under the Northern Ireland protocol reportedly make the process of moving horses on these routes more complex, costly and time consuming than it was before Brexit. Delays at BCPs can be “significant”, the report says, citing wait times of up to seven hours at Calais.

“The Government should work with the EU to formulate an agreement on ‘high health status’ horses as quickly as possible,” the report recommends. “This agreement should be based on a system which is digital by design and easy to use.”

In addition: “The current system of equine ID is not fit for purpose. Its outdated and fragmented paper systems enable fraud. A digital identification system would help to prevent horse smuggling and enable the expedited movement of ‘high health status’ horses. The mandatory microchipping of equines facilitates a digital identification system, which we believe is available at the moment.” 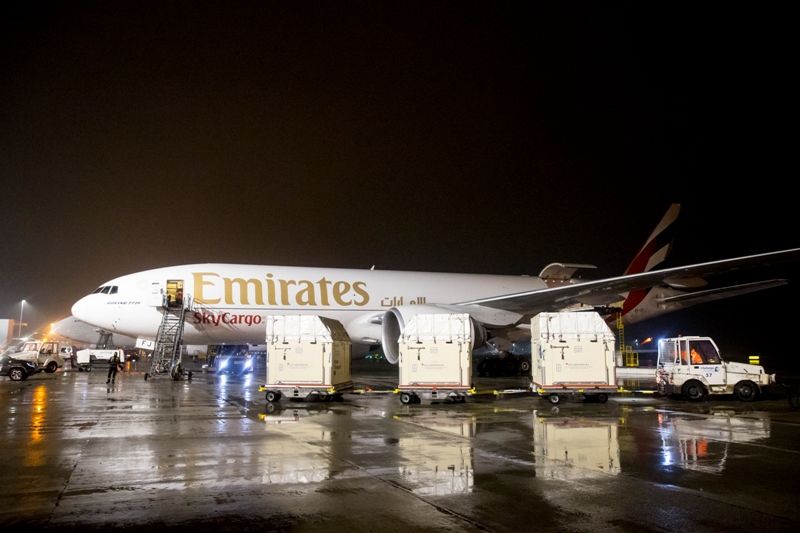 Digitalisation would also provide commercial benefits, McMullen goes on. For example: “We could use data to … manage the demand for where horses are flying and when, proactively. Intradco has started to do this; it’s a work in progress, but we believe it will help improve pricing.

“There’s also technology for tracking animal welfare, using data gathered during a flight. Examples include heart rate monitors, heat maps and even humidity measures to check sweat levels. There’s even a possibility that video feeds could be introduced,” he concludes.

During the COVID-19 pandemic, while stud programmes continued as usual, the movement of horses for competitions decreased because large events such as the Global Champions Tour were cancelled.

Plus, potential buyers could not travel to see or purchase horses, further impacting demand for horse transport.

Travel restrictions also applied to the flying grooms and vets that must accompany horses on flights.

Many freighter operators are still imposing embargoes on such personnel to protect their flight crews, Atock says, although he notes that waivers have been issued in some cases, to allow grooms to accompany horses on their way to those events that have been allowed to take place.

Administrative delays have been another issue. For instance, according to McMullen: “Grooms flying to the US must obtain a combination crewmember and transit visa, or C-1/D visa. With Covid, there was a backlog of horses to be flown, and not enough grooms available with the correct visa.

Applications for C-1/D visas were not being processed as quickly as usual, owing to COVID-19. Some airlines were willing to accept Olympic waivers, which helped. We understand that from 8 November grooms will no longer need this visa.”

D’Souza points out that COVID-19 guidance affected all aspects of the Tokyo Olympic flights, including aircraft handling, positioning of the flight deck crew and loadmaster for the freighter aircraft (at Liege and Haneda) and identifying a storage area for the stalls.

Only grooms with negative PCR test results were allowed to board the flight, and permits and approvals were procured from various internal departments as well as airports and local authorities for the flights, he adds.