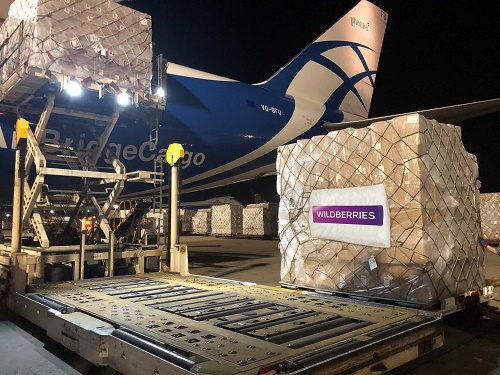 Russian e-commerce retailer Wildberries has launched a cargo charter flight in partnership with AirBridgeCargo (ABC) to meet demand in the far east of the country.

The service, which is operated using B747-8F aircraft, launched at the start of the month with more than 1,700 parcels weighing 33.5 tonnes transported from Moscow to Yuzhno-Sakhalinsk.

The airline said the flights will enable e-commerce development in the Far East and speed up the delivery process to consumers from remote regions.

A spokesperson for the online platform said: “E-commerce unites various regions of our vast country, however, its expansion in remote regions faces challenges associated with high logistics costs and lack of respective infrastructure.

“Wildberries’ geography is expanding at a sky-rocket pace, with the Far East being one of the major and emerging regions for our further development. Together with our partners, we are set to enhance regional e-commerce infrastructure, open new partners’ pick-up points, and speed up delivery to hard-to-reach places.”

Alexey Zotov, commercial director of ABC, added: “Air transportation has always been and still is the key to successful e-commerce development, which is equally important for global and domestic coverage given a vast territory of our country and geographical remoteness of our regions.

“For us Wildberries is a strategically important partner, our cooperation will strengthen the positions of both companies in the e-commerce market and, most importantly, will enable us to keep the delivery deadlines which are crucial today. Later on, we aim to introduce regular air services to other regions of Russia and beyond.”

Wildberries has also invested in parcel pick-up points in partnership with other companies as part of its efforts to expand its reach in remote locations.