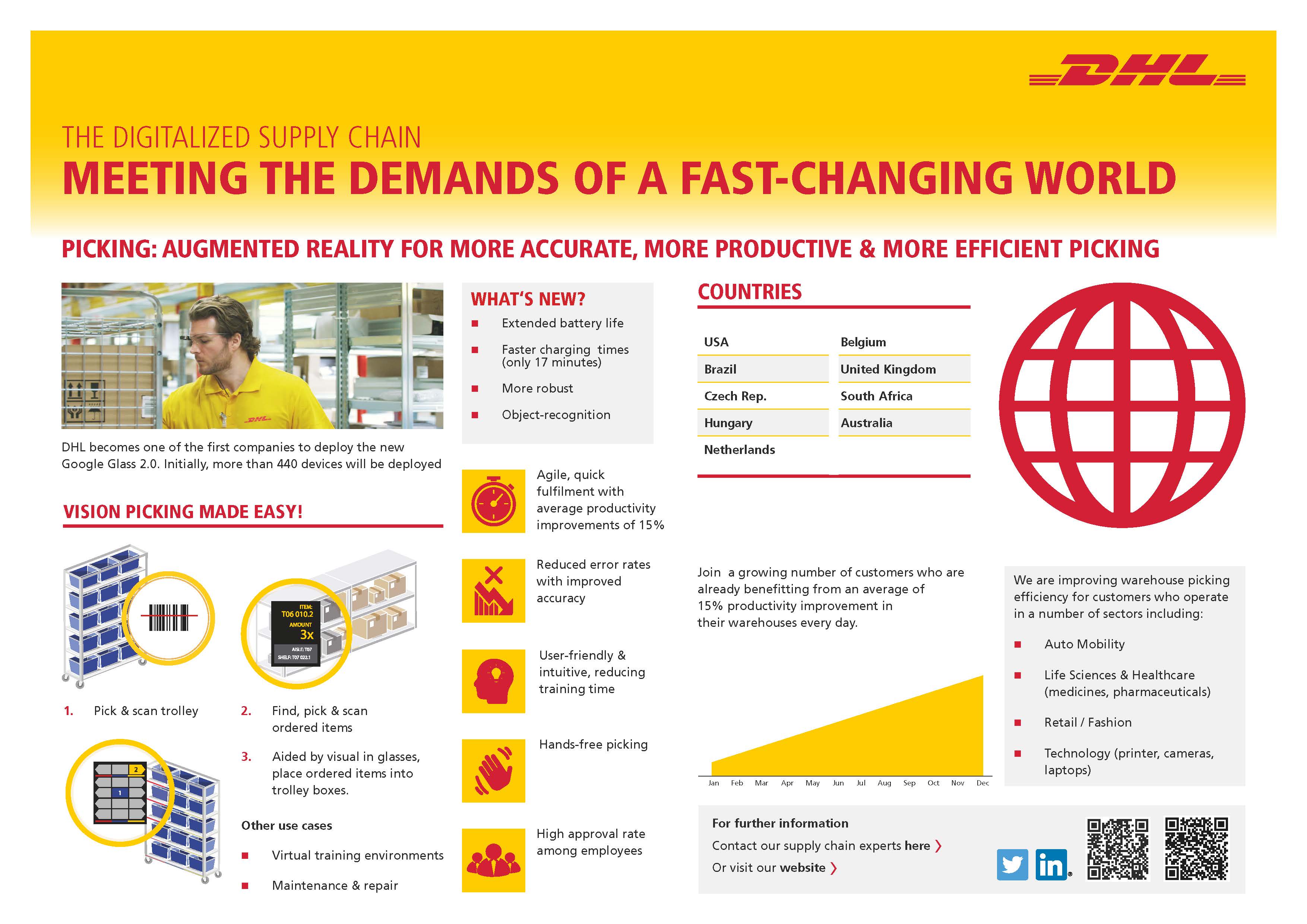 DHL Supply Chain, the arm of the Deutsche Post DHL Group that handles contract logistics, is rolling out the latest smart glasses technology across its worldwide facilities.

DHL staff will use the second-generation of Glass Enterprise Edition smart glasses.

The glasses ‘virtually support’ the vision picking process in warehouses. According to DHL, “Augmented reality in the warehouse is driving a more accurate, productive and efficient picking process.

“While user-friendly and intuitive, hands-free picking is providing a positive experience and high approval rating among employees,” it said.

“The successful use of smart glasses in contract logistics has also convinced other DHL business units. In the future, DHL Express will also use these wearables in its hubs,” a statement promised.

Smart glasses were successfully piloted at DHL Supply Chain in early 2015 before they became a standard feature of warehouse operations within DHL.

Following tests in the US, Europe and the UK, the contract logistics company rolled out smart glasses in a step by step over the few years since and now undertakes ‘vision picking’: a picking process supported with augmented reality, in most geographical regions.

This successful implementation of the technology convinced DHL Express to go down the same route. It is using smart glasses at its freight hubs in Brussels, Belgium, and at Los Angeles Airport, on the West Coast of the US.

Further deployments are planned by DHL Express at the US airports of New York, Cincinnati and Chicago.

“The possibility of object recognition is also particularly promising for us in industrial applications,” Voss continued.

“We expect this to lead to further productivity increases from which our employees and our customers will benefit equally.”

Improvements to the latest generation of smart glasses include longer battery life, a processor that is twice as fast, and shorter charging times. According to the manufacturer, the devices are also now much more robust.

“These glasses and other wearables such as ring scanners and Smart Watches are already being used commercially in many of our warehouses,” Voss observed.

“While these applications are only one part of a company-wide digitalisation strategy at DHL Supply Chain that includes the use of robots, drones, autonomous vehicles and many other technologies, I am particularly pleased with the positive feedback from the colleagues who work with these wearables on a daily basis

“The operation is so intuitive, their hands are free to ‘pick’ and the visual support helps to locate the products really fast and sort them into the intended trolley boxes.

“Our colleagues are perfectly equipped to carry out picking quickly,” Voss concluded.

Back in 201, Air Cargo News reported that DHL Supply Chain was rolling out the next phase of its Vision Picking Programme that equips order pickers with smart glasses to display where packages need to be placed in the next stage of the supply chain.

Successful trials of the ‘augmented reality technology’ in the Netherlands with partners Google, Vuzix and Ubimax inspired DHL to expand the programme across different industry sectors on a global scale.