Global trade will continue to grow, but at slower pace 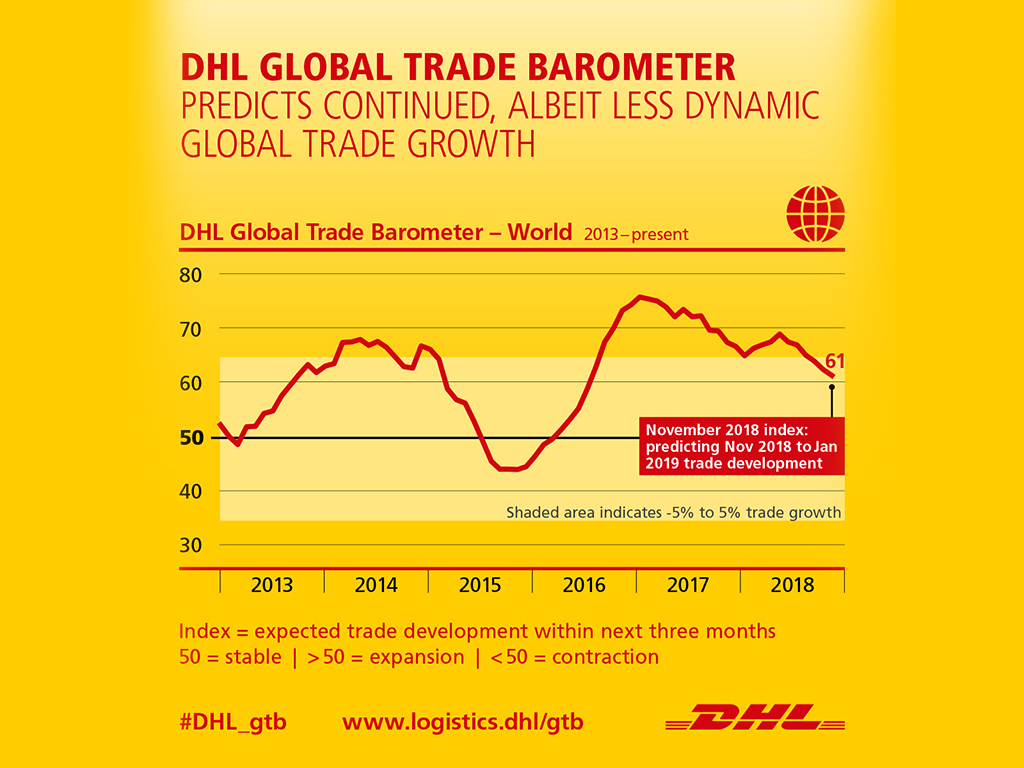 The latest DHL Global Trade Barometer (GTB) predicts that global trade will continue to grow over the next three months but more slowly, especially in the UK which is at stagnation level.
The barometer, which looks at seven major trading countries representing 75% of global trade, indicates that India will continue to grow most dynamically, although it has dropped eight points since the previous release of the barometer in September.
Tim Scharwath, chief executive DHL Global Forwarding, Freight, says: “The barometer clearly shows that the state of global trade remains solid. Both air and ocean trade continue to grow around the world.
“However, given the smouldering trade conflicts, especially between the US and China, and economists’ expectations that the global economy could cool down, it is not entirely surprising that trade momentum has weakened slightly.”
With an overall index of 61 points, the GTB’s analysis of international air and containerised ocean trade flows indicates that the development of the previous quarters will continue. Indices for all seven countries that constitute the GTB index are above 50 points, which corresponds to a positive growth forecast according to the underlying methodology.
The pace of growth, however, is further slowing in all index countries. This deceleration will be particularly strong in Asia (except for China): Index values for India, Japan and South Korea have dropped by eight, six and five points respectively compared to the previous release of the GTB in September. With an overall index of 75 points, India, however, continues to be the country with the strongest trade growth forecast.
Trade growth in the US (61 points) and China (58 points) remains solid. Both countries’ momentum of growth is slowing only moderately by two and one points, respectively – even though both countries would have much to lose if their trade conflict escalated.
With a two-point decline and an index value of 56 points, Germany’s loss of trade growth momentum turns out to be moderate, too, compared to September.
While the UK was able to keep its GTB index unchanged in the previous release, its growth forecast has now deteriorated noticeably by four points. This makes it the index country with the weakest growth forecast: With 53 points, the UK is only slightly above the 50-point mark, which indicates stagnation in trade growth.
The worldwide deceleration of trade growth is attributable to declines in both containerised ocean freight and international air trade – with last year being a peak year with exceptionally high volumes. South Korea is the only country whose growth forecast for ocean trade remains unchanged. In all the other countries, the outlook for ocean trade is declining.
Furthermore, the air trade outlook is going down in every index country.
In terms of individual sector developments, industrial raw materials contributed most to international trade growth, followed by machine parts and basic raw materials. The weakest growing categories were consumer & household goods, capital equipment and machinery parts.
Launched in January 2018, the DHL Global Trade Barometer is an innovative and unique early indicator for the current state and future development of global trade. It is based on large amounts of logistics data that are evaluated with the help of artificial intelligence.
The indicator has been developed in cooperation between DHL, the world’s leading logistics company, and IT service provider Accenture. It is published four times a year. The next release date is scheduled for March 27, 2019.