When DHL Express first announced plans to switch its main European hub to Germany’s Leipzig-Halle Airport in 2005 it was hard to imagine how quickly freight tonnages would increase once the facility was open.
In 2007, the year before the new DHL hub was opened, the airport handled 101,364 tonnes. In March 2008, DHL began transferring flights over to the airport and in May 2008 full operations at the hub were underway.
By the end of the year, the airport had seen its freight volumes soar to 442,453 tonnes and in 2015 throughput brushed close to the 1m tonnes mark, ending the 12 month period with a total of 988,240 tonnes.
Leipzig is now the second busiest air cargo airport in Germany – behind Frankfurt – the fifth busiest in Europe and ranked number 19 globally.
The rapid growth in demand at the airport meant that the express operator needed to expand, with work starting on two new terminals in December 2013. In October this year operations got underway at Terminals Two and Three.
The two new terminals cost a total of €230m to build and increased shipment processing times at the hub by 50% to 150,000 items per hour, with the hub’s surface area more than doubling to 87,000 sq m.
Employee numbers will increase to 4,900 from 2,000 when the hub was first opened.
At the moment, Terminal Three is being used for larger shipments as work continues on its sorting system. This should be fully operational by the end of 2017. 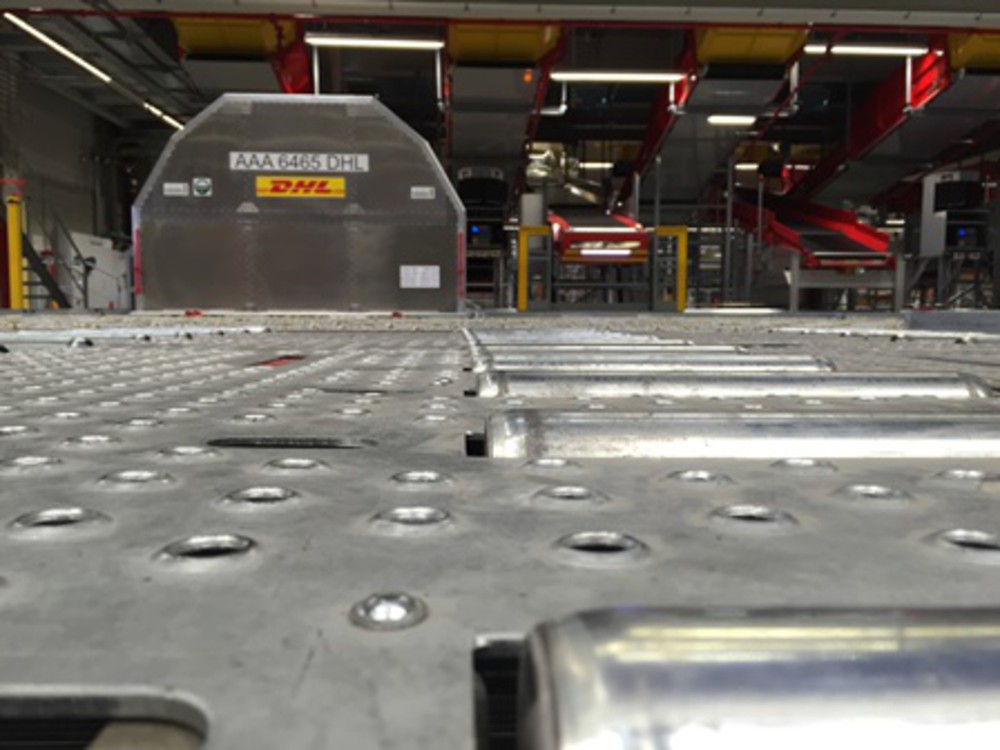 Terminal Two features the world’s first automated pallet handling system, which is fairly similar to DHL’s parcel and flyer system in the way it works, but the shipments it handles are much bigger.
Firstly, ULDs are unloaded from aircraft and the pallets contained within are taken out by forklift and placed on a yellow tray on the pallet handler and scanned.
The pallet is then whisked 12 m up onto the mezzanine floor where it is automatically transferred to the correct area of the hub before heading back to ground level to be taken off the yellow tray and placed in a ULD waiting to be loaded on an aircraft heading to the shipment’s final destination.
The system can handle shipments with a maximum weight of 170 kg and measuring 2 m wide with a depth and height of 1 m each. Normally the ceiling for automated sorting is around 30 kg.
“It enhances our speed and efficiency and improves safety for our employees because you don’t have to have these bulk loads on the manually handled conveyors,” Leipzig hub managing director Ralph Wondrak said. “All in all we spent €80m on the new technologies.”
In total, the system can handle 5,000 pallets per hour and the trays travel at 2 m per second.

The hub’s three terminals are located next to each other and are all connected. DHL also built a new European network control centre (ENCC) as part of the development.
While the sorting centre is described by DHL as the heart of its network, the ENCC is described as its brain. The centre co-ordinates around 100 flights per night by DHL aircraft, or aircraft flying on behalf of the express firm, with around 65 of those aircraft landing in Leipzig.
DHL Express Germany chairman of the divisional board Wolfgang Albeck said he couldn’t have imagined the hub would need to be expanded in less than ten years from opening.
“I was involved in the first construction segment and when we planned it we never thought we would be able to expand this quickly. If we had presented the figures for the planning phase that we have achieved already nobody would have believed it, so this is a great success story.
“Hub Leipzig has become an important hub for the global network but also Germany is benefitting from it.
“We have very short routes to the hub and we can offer very good delivery and pick up times.
“During the planning phase we already had the first negotiations with forwarding companies that wanted to become established here because they wanted to use our services to and from Asia.” 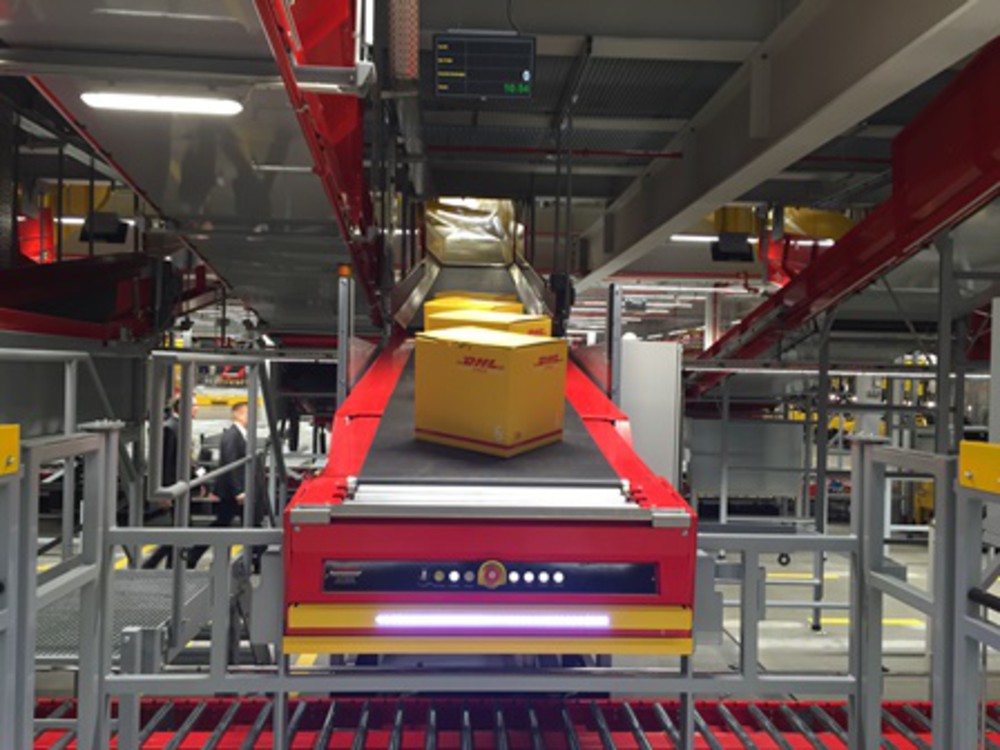 Deutsche Post DHL Group chief executive Frank Appel added that the facility’s location had also contributed to its success.
“When we opened the hub in 2008 I had just entered office so I like to remember the opening and I am happy to open the extension,” he said.
“The hub of Leipzig is very important because 30% of all European business is handled in Leipzig and 16% of all global DHL flights go through the Leipzig hub.
“It is in an excellent location, strategically positioned in the heart of Europe and is also in an excellent position to reach Asia and that is why we decided to expand our capacities here.
“This is good because of the jobs we have created here. Right now we have 4,900 jobs here and that is something I am proud of. We want to grow further because we have the best offer of products and we are confident that we will be capable of using our capacities here.”
Wondrak added that other reasons it decided to settle in Leipzig were the excellent road and rail connections, unrestricted night flights and a pool of skilled workers.
At an event to mark the opening of the hub, the positive impact DHL’s decision to locate at Leipzig has had on the region was continually emphasised.
This is presumably in anticipation of some concerns that the expansion may result in more flights, noise and pollution.
Other airports in Germany – and across Europe – have been dealing with night flight bans, which have a particular impact on express operators that prefer to work through the night in order to meet next day delivery expectations.
When asked by a member of the local press whether there would be increased air traffic following the expansion, Wondrak responded: “This is about enhancing our process times through innovative engines and control systems.
“That is what our clients want. They want us to pick up the parcels and shipments as late as possible and to deliver them as early as possible, so we need technology which can reduce processing times.
“This is a global hub and we have invested a lot, but we are also investing in new hubs in Brussels and the East Midlands (UK) and these are all components in order to handle additional volumes in the future.
“So at the moment it is a bit difficult to tell you what the situation will be in two or three years as far as the co-ordination of the shipments are concerned; where we will route them and what the directions will be.
“But it is important to have the capacities available here to meet the challenges of the network and to also have free capacity to offer the best possible performance of the network.” 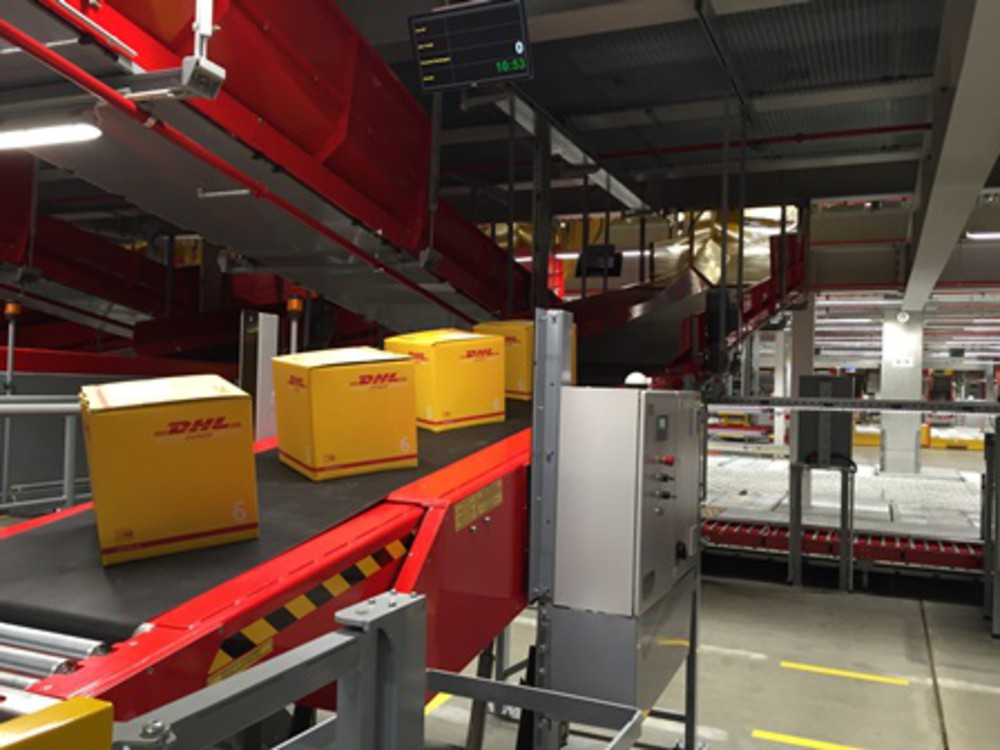 Mitteldeutsche Airport Holding board spokesman and managing director of Leipzig/Halle Airport Johannes Jahn said the airport had spent more than €100m on a noise control system and it is in regular contact with its partners and regional authorities about these concerns. He added that newer aircraft were quieter.
There was also support for the development of the hub at a regional level.
Minister President of Saxony Stanislaw Tillich said: “Leipzig is in the second position of all hubs in Germany and this is why the state government and the city of Leipzig are convinced that 24 hours a day air traffic is necessary.
“We do agree to 24 hours a day air traffic knowing that may be a burden to some but we know that this is also an opportunity because it adds value and creates jobs for our region.”