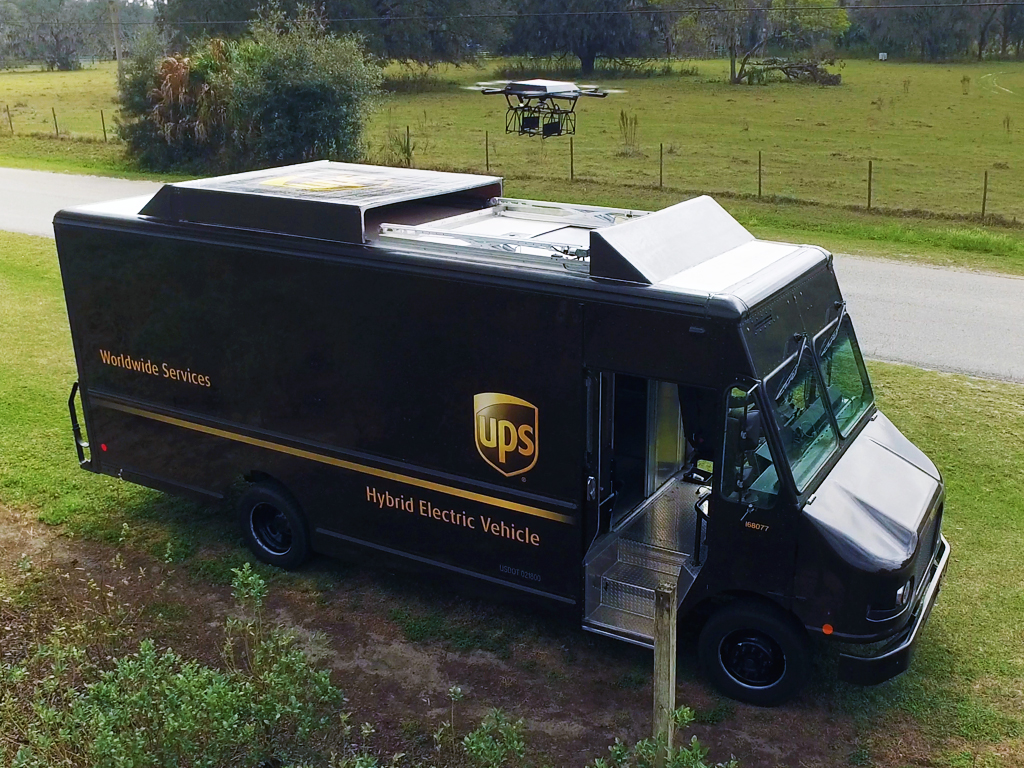 Express services giant UPS has taken another step down the road towards the delivery of packages and other small shipments by drone.
It has successfully tested a drone that launches from the top of a vehicle, autonomously delivers a package to final destination and then returns to the vehicle, all while the delivery driver is able to continue along his/her land-based route in order to make a separate delivery.
UPS conducted the test on 13 February in Lithia, Florida, in collaboration with Workhorse Group, an Ohio-based battery-electric truck and drone developer.
Workhorse built both the drone and the electric UPS package car used in the test.
“This test is different than anything we’ve done with drones so far. It has implications for future deliveries, especially in rural locations where our package cars often have to travel miles to make a single delivery,” said Mark Wallace, UPS senior vice president of global engineering and sustainability.
“Imagine a triangular delivery route where the stops are miles apart by road. Sending a drone from a package car to make just one of those deliveries can reduce costly miles driven.
“This is a big step toward bolstering efficiency in our network and reducing our emissions at the same time,” Wallace enthused.
Rural delivery routes are the most expensive to serve due to the time and vehicle expenses required to complete each delivery; hence the consideration UPS is giving to an unmanned aerial vehicle (UAV) option for last-mile type deliveries.
“Drivers are the face of our company, and that won’t change,” Wallace observed.
“What’s exciting is the potential for drones to aid drivers at various points along their routes, helping them save time and deliver on increasing customer service needs that stem from the growth of e-commerce.”
The drone used in the test was the Workhorse HorseFly UAV Delivery system.
Its operation is fully integrated with Workhorse’s line of electric/hybrid delivery trucks.
The drone docks onto the roof of the delivery truck. A cage suspended beneath the drone extends through a hatch into the truck.
The driver inside loads a package into the cage and presses a button on a touch screen, sending the drone on a pre-set, autonomous route to the delivery address.
The battery-powered HorseFly drone recharges while it’s docked.
It has a maximum 30-minute flight time and can carry a package weighing up to 10 pounds.
For this test, Workhorse pre-set the route for the drone. But, in the future, UPS noted, routes could be determined by its On-Road Integrated Optimization and Navigation (ORION) system, the company’s own proprietary routing software.
“It’s wonderful to see this technology applied in such a practical way,” enthused Stephen Burns, Workhorse’s founder and chief executive.
“The drone is fully autonomous. It doesn’t require a pilot. So the delivery driver is free to make other deliveries while the drone is away.”
UPS has been testing automation and robotics technologies, including drones, for a number of years now.
In September last year, UPS ran a trial in which it delivered by drone a payload of medicine from Beverly, Massachusetts, to an island three miles off the Atlantic coast.
Moreover, UPS is already using drones for actual humanitarian relief delivery, partnering with third-party organisations to transport blood and vaccines to hard-to-reach locations in Rwanda.
More prosaically, UPS is also utilising drones to check inventory on high storage shelves in its warehouses.
But the point of this recent UPS drone test was to show how drones might assist in making non-urgent residential deliveries as part of everyday operations.
Other future strategies
Drone development is of course just one aspect of UPS’s planning for the future.
In other news, the integrator has provided an update on its long-term growth strategies, plus its transportation and operations network transformation plans, during an investor conference in New York City.
The theme of the conference was: ‘Invest. Grow. Deliver’, and amongst the priorities laid out were:

“Over the next several years, you will see the most sweeping transformation of our network in its history,” said David Abney, UPS chairman and chief executive.
“We are adding more flexible capacity, more technology, more capabilities and becoming more efficient, ultimately to improve customer and shareowner value.”
Also at the conference, chief financial officer Richard Peretz gave details of the company’s 2017 outlook and updated its 2018 and 2019 financial objectives.
Highlights for UPS’s 2018 and 2019 financial targets include revenue growth of 4-6% over the period.
It was also confirmed that UPS plans for capital investments of 6% to 7% of revenue a year.
“The strong financial hallmarks of UPS remain unchanged,” Peretz declared.
“We continue to deliver the highest operating margins in the industry,” he continued.
“This legacy combined with our future growth prospects makes UPS a high-quality investment today, and for years to come as we build the smart logistics network.”