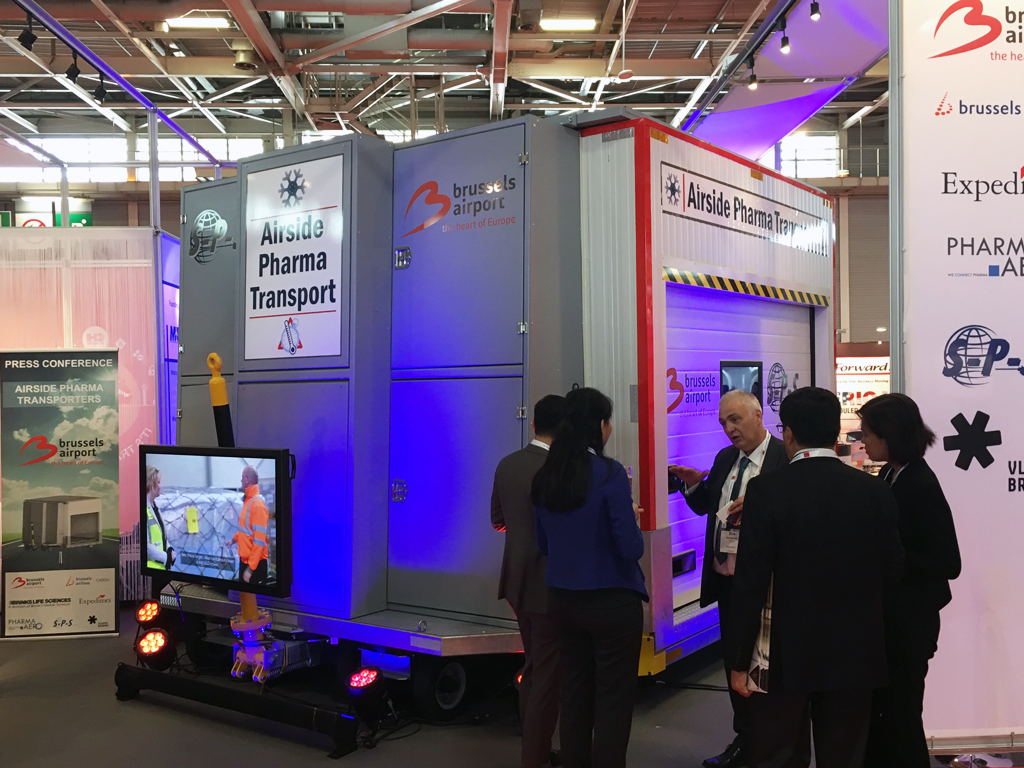 Brussels Airport unveiled the latest version of its Airside Pharma Transporter at the TIACA Air Cargo Forum in Paris and said it has proved so popular it is already considering ordering an extra one.
Initially, four of the units have been put into action, but demand from cargo handlers means that the airport is already considering an extra dolly.
The trailer-mounted insulated vehicle can operate autonomously for several days without being plugged into a mains supply. During the winter it can operate for around for around 24 hours without needing to be charged and in the summer this is extended to 36 hours.
The refrigeration unit also reaches the required temperature much faster allowing it to be used several times a day.
Temperature and location of the transporter can be monitored in real time and, thanks to an innovative insulation and cooling system, can maintain temperature even in strong sunlight, said Brussels airport.
In conjunction with the launch of the dolly, the airport also launched a booking app for mobile devices.
Nathan De Valck, cargo account manager at Brussels Airport, said that cargo handlers can use this to book the dolly for a single four hour period, or on a recurring basis. The handlers then pay for this usage.
The original version of the Pharma Transporter was introduced last year at the airport’s Brucargo terminal, but this is an "active" version, while the other was "passive".
Brussels Airport chief executive, Arnaud Feist, said: “We innovated earlier with IATA by developing the CEIV guarantee certificate for the cold chain; our airport was also the first to achieve this worldwide standard. With the new Airside Pharma Transporter we have developed an efficient product that, thanks to the solar panels, is also extremely environmentally friendly.”
De Valck said that the airport had involved the entire cargo community – from forwarders to airlines, shippers and handlers – in developing the facility.
As a group they had identified temperature protection, timings, traceability, cost and ability to handle various sizes of cargo as the main requirements.
He said they could have developed a system that guaranteed temperatures at set levels but decided this would have been cost prohibitive.
Instead, the dolly they developed will contain cargo with a range of five to 25 degrees Celsius, stopping any pharma shipments from being affected by spikes in temperature.
Brussels says that other airports are now showing interest in the system.
The Air Cargo News Life Sciences and Pharmaceuticals Air Cargo Conference will take place in London this year at the Hilton London Heathrow Airport at Terminal 4 on November 22 and 23.

Express giant UPS has expanded its “Premier” service for time- and temperature-sensitive shipments to Thailand and Singapore. The service offers…

Sonoco ThermoSafe has announced a rapid expansion of its Pegasus ULD fleet, a passive aircraft-certified temperature-controlled container accessible via a…