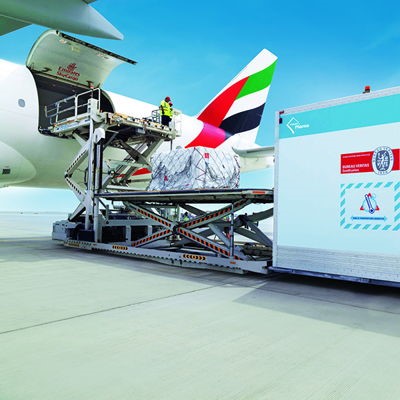 Dubai-based airfreight carrier Emirates SkyCargo has boosted its worldwide pharmaceutical handling capabilities through a range of improvements to its infrastructure and processes.

First, it has begun handling pharma cargo at a new purpose-built facility in Chicago.

The facility, dedicated solely for pharmaceutical shipments, covers an area of more than 1,000 sq m, with scope for further expansion in the future.

It offers temperature-controlled zones (of 2-8 degrees Celsius and 15-25 degrees Celsius) for acceptance and delivery, pharma cargo build up and break down, storage and direct ramp access.

The proximity of the facility to the ramp also means that temperature-sensitive pharma cargo has to spend only a short amount of time in transit to and from the terminal to the aircraft.

Developed in partnership with ground handling company Maestro, the facility has a capacity of handling 15,000 tonnes of pharma shipments per annum.

“Having a dedicated facility for pharma at one of our busiest stations for pharma in our network is a big boost to our pharma handling credentials and capability.”

Sultan continued: “This was also a unique model wherein we worked closely with the ground handler and were involved in the planning for the facility from the very beginning.

“Using our learnings from transporting pharma across six continents, we were able to collaborate to make the new pharma facility fit for purpose.”

The carrier announced its pharma corridors initiative in January 2018. Since then, Emirates SkyCargo has expanded its initial network of 12 pharma stations to a total of 20.

As part of its pharma corridor programme, Emirates SkyCargo works with ground handling partners and other local stakeholders at the stations that are important origin or destination points for pharma.

Commenting on the progress made in the pharma corridor programme, Henrik Ambak, Emirates senior vice president, cargo operations worldwide, commented: “Pharmaceutical cargo[s] being transported by air are growing in their sophistication and complexity in terms of the strict regulations for handling and temperature control.

“We introduced the pharma corridors initiative because we wanted to expand the required high standard of handling for pharma shipments further into our network and serve markets better from origin to destination.”

Ambak informed: “We have been successfully working with our ground handling partners at our major pharma points and the model has met with quite a lot of success and positive feedback from our customers.

“This has motivated us to replicate the model at more pharma stations, thus growing our pharma corridors network to more than 20 stations.

“We’ll continue to look at how pharma flows through our network and add more stations in the future,” he promised.

Emirates SkyCargo’s pharma operations in Dubai, including its 24/7 trucking operations between its terminals at Dubai International Airport and Dubai World Central, have been re-certified as compliant again this year.

Earlier this year, the air cargo carrier went through a rigorous audit by Bureau Veritas according to which its pharma handling facilities and processes were completely re-evaluated.

During its 2018/19 financial year, the carrier transported more than 75,000 tonnes of pharmaceuticals across its network.

In other pharma-related news this week, Rome’s Fiumicino (otherwise known as Leonardo da Vinci) airport has become the first air gateway in Italy to gain CEIV Pharma certification from IATA.

The news was announced at Air Cargo Europe, being held in Munich this week.

Last month (May), Emirates Group announced that it had faced “significant headwinds” in global airfreight markets during the 2018-19 financial year, which saw Emirates record a 1.4% rise in total airfreight volumes to hit a figure of just under 2.7m tonnes.

Meanwhile, the group’s cargo handling arm dnata saw near static volumes in 2018-19, edging ahead just 0.3%, to around 3.1m tonnes.