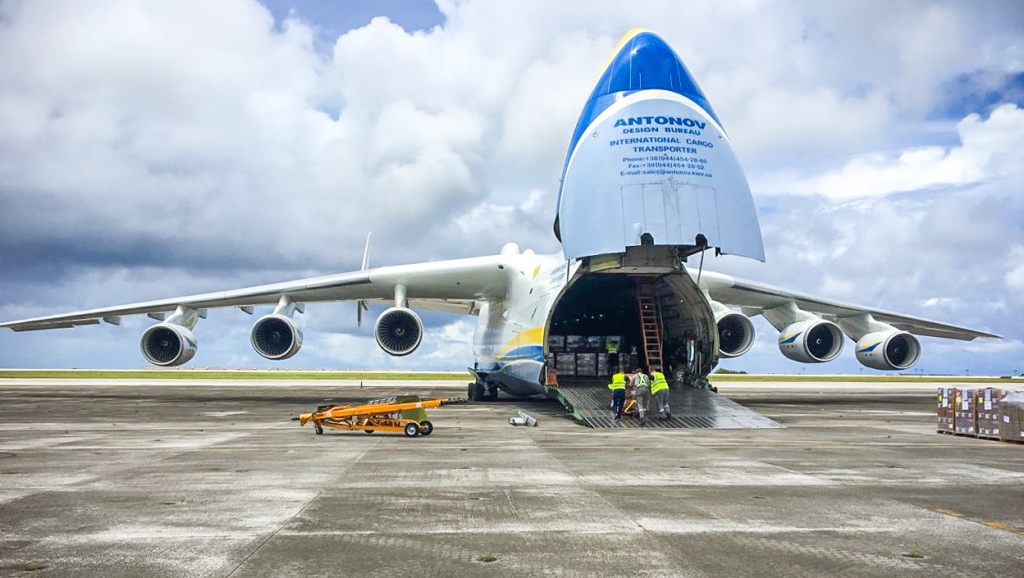 Charter broker Air Partner and Antonov Airlines helped transport relief supplies to the US island of Guam following Super Typhoon Manngkhut.
On September 9 the broker was contacted by emergency response specialist Radiant Global Logistics to assist with the transport of supplies to Guam in preparation for Super Typhoon Mangkhut.
Air Partner’s cargo division provided Radiant an AN-225, operated by Antonov Airlines, and an AN-124 aircraft to help move urgent relief supplies, such as delivering water and ready to eat meals, on September 11 at the request of the US government.
The aircraft, which is the biggest in the world, made its way from Ukraine to California in a mammoth 13-hour non-stop flight, before flying from Oakland International Airport to Guam International Airport with over 123,000 kg (271,200 lb) of aid. This was the first visit of the AN-225 to the island of Guam.
The choice to use the AN-225 was made based on its immediate availability, coupled with the need to transport the maximum possible volume of cargo in the shortest possible timeframe.
“Through the support and quality of service that Air Partner provides, we were able to successfully complete these projects within 24 hours after the storm passed,” said Wiley Knight, director of Humanitarian Aid for Radiant Global Logistics. “Our partnership and the absolutely essential understanding of rapid response is exactly what we needed to fulfill our missions.”
The ability to load and unload through the aircraft’s nose cargo ramp without any special ground infrastructure allows for the transport of a wide range of cargo with minimal notice, as well as enabling the operation to be carried out completely autonomously
Antonov Airlines said the capability of the aircraft to load outsized cargoes, such as emergency response vehicles, allows the team responsible to plan operations flexibly in rapidly changing circumstances during emergency situations.
Because of the Open Skies Agreement between Ukraine and the US, which grants the airline a blanket exemption giving unlimited flights to and from the US, ANTONOV Airlines can carry any type of cargo with only a few hours’ notice.
The typhoon reached winds of over 100mph as it approached the island on September 10, causing widespread destruction. It then continued on its path across the Pacific Ocean, eventually reaching China on September 16.
Read more charter company news
Click here for a free digital subscription