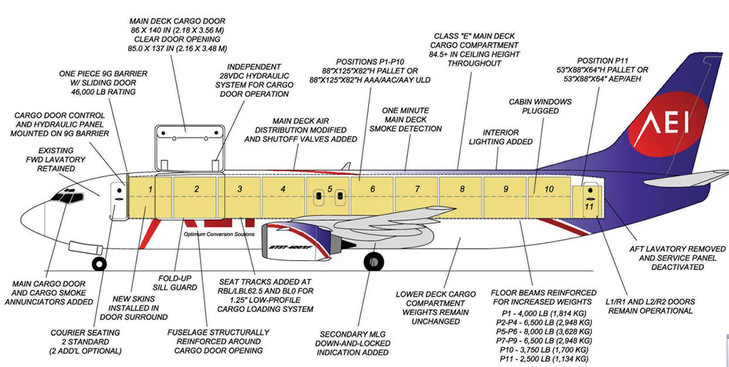 Aeronautical Engineers (AEI) has signed a contract with Vallair to provide the company with four 11 pallet position Boeing 737-400SF freighter conversions.
All of the conversions will be modified by Commercial Jet’s Dothan, Alabama facility with the first one commencing in May 2016, followed by the remaining three modifications in June, July and September of this year.

"The AEI B737-400SF is the only passenger to freighter conversion product that offers operators ten full height 88” x 125” container positions," said AEI.
The additional container position increases AEI’s volumetric carrying capability by 10%.
The deal is the latest in a spate of conversion orders, primarily fuelled by demand from the express industry.
Last week, PACAVI confirmed the first orders for its Airbus A320-321passenger-to-freighter (P2F) conversion programme.
São Paulo based business charter company Colt Aviation/Colt Cargo, has ordered two converted A321 freighters with an option for one more and Norway’s Airline Management will acquire six A320 freighters.
The conversion specialist said that an additional launch order has been issued by an undisclosed leasing customer.
Also, Precision Aircraft Solutions  received an order for eight Boeing 757-200 freighter conversions and delivering three aircraft to customers.

Southwest Cargo has launched a new digital airfreight booking platform, developed in cooperation with technology firm Hangar A. The tool,…

Covid-19 vaccines are being delivered to medical practices by drones in the US for the first time. The drone flights…