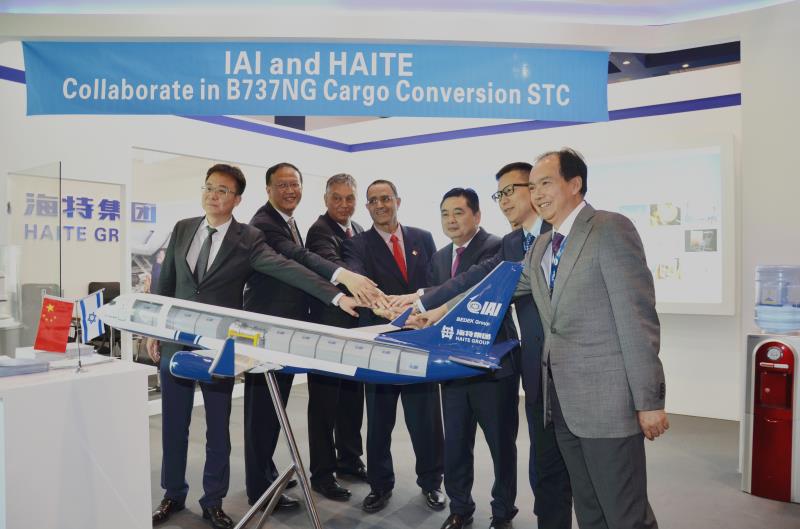 Israel’s Bedek Aviation Group has signed a partnership agreement to co-develop a conversion programme for Boeing 737NG passenger aircraft into freighters.
The collaboration, announced at 2017 Paris Air Show, sees the subsidiary of Israel Aerospace Industries (IAI) partner with China’s Haite Group, through the latter’s Tianjin Aircraft Engineering Co arm.
Bedek and Tianjin expect that the new partnership will be “up and running quickly” so that the first converted B737-700 aircraft is certified and delivered to their unnamed launch customer.
Development of separate B737-800 passenger to freighter conversion programme has already begun under the same partnership and the project is progressing according to schedule. It is expected to make Bedek one of the first suppliers to reach the market with a certified Supplemental Type Certificate (STC).
Yosi Melamed, executive vice president & general manager of Bedek Aviation Group, said: "Our partnership with the Haite Group has come on the right time in light of the projected continued growth in the demand for conversion into freighters and even more so, in view of the fast economic growth in China and India.
“The B737NG is the future ‘feedstock’ of the narrow body freighters and we expect to be one of the first suppliers with an STC and a high-quality solution for the B737-800 that meets the growing market needs."
Haite Tianjin Aircraft Engineering Co is a China-based aircraft maintenance, repair and overhaul (MRO) enterprise, with overhaul and conversion sites in Chengdu and Tianjin.
Bedek has experience of more than 25 years in passenger to freighter conversion programmes for the B737-300/400, B767-200/300 & B747-200/400.
Earlier this month, Bedek said that it is “up to its neck in work” for passenger to freighter conversions, and is to open a conversion centre for Boeing 767-300s in Mexico City, to be run by Mexicana MRO Services as Bedek’s sub-contractor.