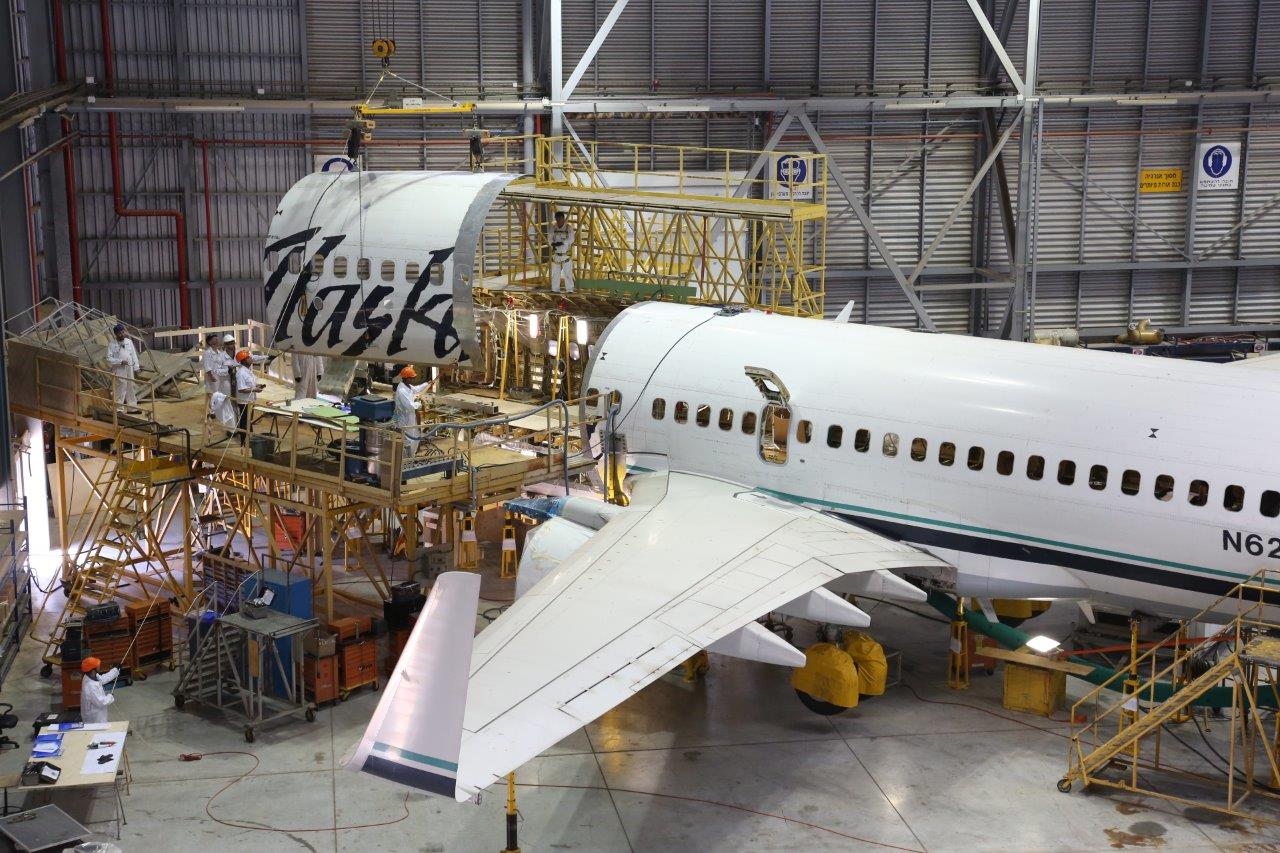 Bedek Aviation Group has 35 years’ experience of passenger to freighter (P2F) conversions, starting with the early Boeing 747-100s, and is already eyeing the prospects for the Boeing 777.
The conversion specialist, part of the Israel Aerospace Industries (IAI) giant, has focused on the Seattle-based plane maker’s family of aircraft and is currently developing a new Supplemental Type Certificate (STC) cargo conversion for the Boeing 737-700BDSF.
IAI says that the prototype aircraft is undergoing a full-freighter configuration conversion, including the completed installation of a wide cargo door.
All work will be performed at the Bedek facilities in Israel and STC approval is expected during the fourth quarter of 2016.
IAI will also perform the first ‘with winglets’ B767-300 P2F conversion on behalf of express operator DHL.
The aircraft, already at IAI, underwent a series of tests, both on the ground and in flight, and is being converted at the Bedek facilities and scheduled to receive the modified STC (for an aircraft with winglets) in February 2017.
Air Cargo News spoke to Rafi Matalon, senior director and general manager, marketing and business development, at Bedek.
“We see big demand for the –700 and -800 [B737] and for the longer term we have a programme for the B777–200 and -300 which we believe will be the lead wide-body aircraft for the future.”
He added: “We are not focused on one platform, as are our competitors, and this gives us a big advantage in the conversion market, both for wide-body and narrow-body. We are also using the same technique for modification, something which has already proved itself.”
Asked about the prospects for the near-future P2F markets, Matalon says: “Regarding the B737, I think we are in the last period of conversion for the B737 Classic.
“It has no feedstock and the age of the aircraft is more than 30 years. To invest money to maintain such an aircraft is not economical so we feel that in two years’ time there will be no further conversions. The new generation (B737NG] will lead the market for that platform.
“As for the B767, we are in the peak of the wave and we are already working on allocating slots for 2018, which demonstrates a real huge backlog.
“The B767 has become very attractive for conversion and the reason is due to the release of the Boeing 787, which means that the B767 will become the leader for the medium wide-body market as there is no other wide-body available.”
Matalon says that the B767 has benefitted from the growth of e-commerce, particularly in China and the US, which has created demand for express overnight services and thus for the B767, which is best suited for such traffic. Amazon’s entry into the freighter lease market has centred on the B767F for the same reason.
But what of the larger P2F market, which aircraft is likely to compete with the off-the-shelf B747-8F, for example?
The popular production line B777 freighter, capacity 100 tonnes, has 123 in service and a further 35 to be delivered, according to Boeing’s June 2016 figures.
The number of the B777 passenger versions, which launched in 1995 and with the older aircraft being potential feedstock, stands at 1,300 delivered and a further 400 on the Boeing order book.
Asked about the attractiveness of a P2F B777, Matalon says: “We think that between two to three years from now there will be a need for such conversions. The market doesn’t need a passenger to freighter B777 conversion at the moment because you have the MD-11F and other wide-bodies that are still flying.”
As the oil price inches upwards, so the less fuel-efficient MD-11Fs and other aircraft will see their competitive edge eroded. This, it is argued, will promote greater demand for higher volume capacity freighters with lower fuel burn and which are cheaper to buy than a production line model.
Says Matalon: “So our schedule is to provide the first [B777 P2F] aircraft by the end of 2018. Our engineers have already start work on this programme and I have had many meetings with customers who are very interested in this future platform of the B777.”
Engine maintenance synergies with the B767 are another cost-saving factor, while the B777 P2F can compete on price with its larger brother, the B747-8F.
On the question of available B777 passenger aircraft feedstock, and the slight capacity advantage of the production line freighter version, Matalon adds: “The difference in the price is huge, which eliminates the difference in the weight. We don’t think that it is a big difference, in terms of the loading weight.
“I feel that there is a market for the B777 conversion freighter because I meet a lot of customers and they are asking me for a schedule. They want us to provide them with a technical brief.
“I believe that the B777 will lead the wide-body conversion market for at least 10 years.”
How long would such a B777 conversion take? “We believe it will take around four months from the induction date to when we deliver it.”

SpiceJet’s converted B737Fs back in the air after temporary grounding