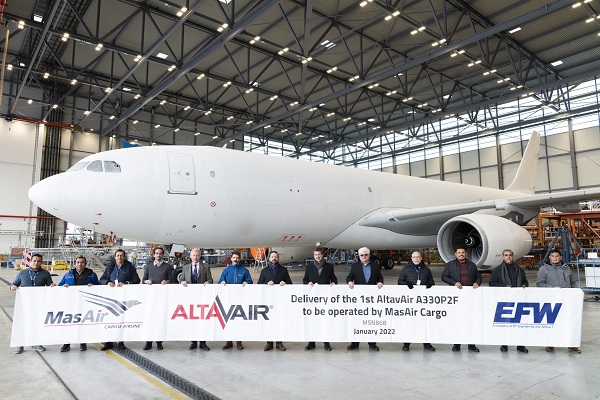 Conversion house EFW has delivered its first Airbus A330-200 Passenger-to-Freighter (P2F) converted aircraft to Altavair, which will in turn lease the aircraft to Mas Air.

The redelivered freighter is the first of a series of A330P2F conversions that EFW is carrying out for Altavair. This order includes both the A330-200P2F “range variant” and the A330-300P2F “volume variant”.

EFW chief executive Andreas Sperl said: “We are delighted to re-deliver our first converted freighter of 2022 to new customer, Altavair, for operation by MasAir Cargo.

“The A330P2F programme is considered very popular delivering best-in-class capability and fuel-efficiency. We are confident it will serve Altavair and MasAir Cargo well.”

Paul Newrick, president and managing director of Altavair (UK), added: “This investment reflects our belief that the A330 will be the premier freighter going forward in the widebody segment.”

MasAir Cargo will use the aircraft to expand into new markets and fly longer routes.

“MasAir Cargo is taking advantage of the aircraft family concept to build up a new Airbus freighter fleet with the A330-200 and A330-300P2F, becoming the first airline in the Americas to operate the Airbus widebody converted freighter, and first in the world to operate the two Airbus A330P2F variants,” EFW said.

The A330-200 and A330-300P2F are a collaboration between ST Engineering, Airbus and EFW, which is leading the overall programme.

To meet the rising demand for freighter conversions, ST Engineering and EFW will set up new conversion sites in China and the US this year and ramp up total conversion capacity for all their Airbus P2F programmes to about 60 slots per year by 2024.