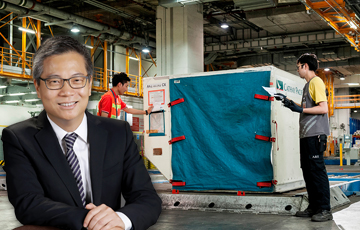 Cathay Pacific Cargo Terminal handled 1.45m tonnes of freight in 2014, its first full year of operation, accounting for 40 per cent of overall throughput at Hong Kong International Airport, writes Martin Roebuck.
Kelvin Ko, chief executive of Cathay Pacific Services Ltd (CPSL), which operates the facility, expects tonnage to increase rapidly this year as it opens up to more third-party customers.
As Cathay Pacific’s cargo handling subsidiary, CPSL worked exclusively for its parent carrier in the first few months after opening, but now handles cargo for Air Asia, Thai Air Asia, Royal Brunei and, as of January this year, Taiwan-based EVA Air.
Speaking to ACN at the World Cargo Symposium (WCS) in Shanghai, Ko explained that a solution developed for EVA Air, enabling it to expand its offer to e-commerce customers, could also be relevant to Cathay Pacific.
“Some e-commerce shippers use the postal channel, while others use specialist forwarders that line-haul consolidated shipments into Hong Kong, then ship out to Taiwan. Everyone is looking for more cost-effective solutions than the integrators can offer,” Ko says. “We now have a dedicated system to X-ray shipments at bag level.”
Cathay Pacific has fully migrated to e-air waybills (e-AWBs) out of Hong Kong, which helps the terminal to minimise connection time. “We offer a connection time of three to five hours for transhipment cargo, which is such an important part of what we do in Hong Kong. You don’t want the documents to become an block to that,” Ko says.
“Before you would have to match inbound and outbound documents, which could result in errors. Some papers such as copies of house waybills are still needed depending on the final destination, but there’s less error when you’re not relying on people to match actual weight to declared weight, make sure security requirements have been met and so on. The system allows us to do ‘intelligent’ checks.”
Some commentators have expressed fears for Hong Kong’s future as the world’s leading air freight hub, in light of China’s political and structural changes. The long-running proposal to build a third runway is at judicial review and this cannot now be built before at least 2023.
The case for the runway is clear, Ko says. “We’ve got to stay competitive. If people migrate to Shenzhen, they won’t come back”
But he remains optimistic about both capacity expansion and Hong Kong’s overall future in air cargo.
“More point-to-point shipments will bypass Hong Kong as China becomes more and more open, but our good connectivity is still a benefit,” he insists. “Sure, you can tranship via Guangzhou or Shanghai, but services are not always on time and they don’t have our connections with the rest of Asia.”