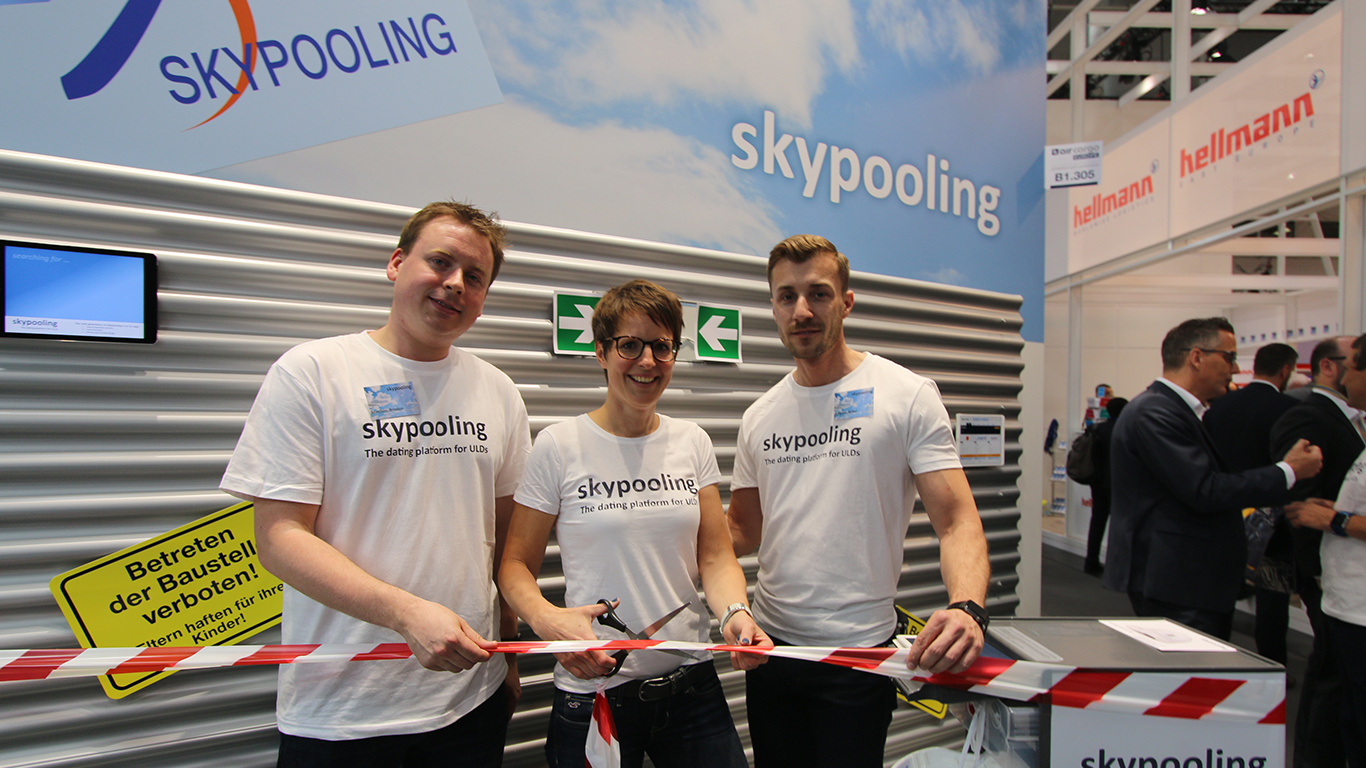 Christine Klemmer, general manager skypooling (middle), and team at the announcement at transport logistic 2019 in Munich

Outsourced ULD management services provider Jettainer has taken over the online platform skypooling, a free tool that helps participating airlines to maintain better control over their ULDs by keeping track of ULD over- or under-stocking and enabling carriers with a similar airport network to coordinate their ULD efforts and help each other to balance their ULD stocks.

Moreover, Jettainer confirmed, it has already started work on the expansion and further development of the platform.

skypooling and Jettainer jointly announced the acquisition and planned innovations during the Air Cargo Europe / transport logistic event being held in Munich this week (June 4 to 7).

skypooling founder Willem-Jan Loomans was looking for a suitable partner and, Loomans informed: “Jettainer was chosen because the company has made an excellent name for itself both with ULD management as well as generally in the creation and development of ULD-relevant IT systems and tools.”

Jettainer has been an active user of the platform for many years but also saw further significant potential that could be realised.

“The complete coordination of ULD rental will take place via the platform: From automated processes, direct booking confirmation and communication to all parties involved to recording the issue and return of ULDs,” said Christine Klemmer, general manager of skypooling.

The new version of the platform will include a modernised front end, with improvements to make it easier for users to locate ULDs as desired.

It is scheduled to go online in the autumn of 2019. In addition, Jettainer is already planning other new features. For example, a lost & found function and insurance services are to be integrated.

“We are making supply and demand in the ULD environment transparent and will bring together parties who would otherwise not have found each other so easily,” Klemmer asserted.

“This enables us to offer solutions that would not have been possible before.”

As a result of all the changes, “skypooling thus becomes a one-stop shop, the online marketplace for searching and offering containers and pallets,” Klemmer said.

The current basic functionalities of the simple ULD platform are to remain free of charge.

The network currently has around 100 members and almost all of the existing airline members have already migrated to the new owner.

Jettainer is a wholly owned subsidiary of Lufthansa Cargo. It is currently responsible for the control, positioning, maintenance and repair of around 90,000 ULDs for 22 airlines.

It currently operates at over 450 airports worldwide. Based outside Raunheim, near Frankfurt am Main, Jettainer has offices at the central hubs of international airlines in Abu Dhabi, Dallas/Fort Worth, Rome and Zurich as well as an operational base in Mumbai.