ULD stickers highlight the need to handle with care 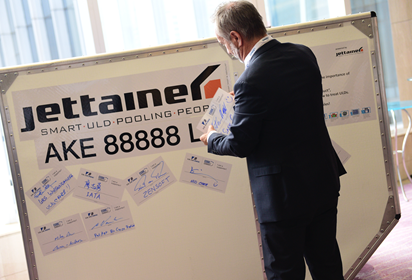 Air cargo industry leaders have pledged their support to advance best practices in handling unit load devices (ULDs), a vital piece of vulnerable equipment in the airfreight supply chain.
According to IATA, there are some 900,000 ULDs in circulation with a replacement cost of more than $1bn and an annual damage repair cost of $330m.
An estimated 120 attendees at the ULD Care conference in Guangzhou, China, signified their support for the initiative by placing stickers on an airfreight container which will be used to promote the programme. The ULD is expected to being flying around the world later this month.
“This ULD will be put into service by Jettainer and Lufthansa, and will circle the globe with Lufthansa, raising awareness and bringing attention to ULD CARE and the Code of Conduct,” said Bob Rogers, vice-president of ULD Care.
ULD Care is a not-for-profit organisation whose members include ULD owners and operators, manufacturers and service providers
“We are very pleased to receive such a great response to our appeal of our members to make a commitment to our Code of Conduct principles,” remarked Urs Wiesendanger, president of ULD CARE.
“This commitment is demonstrated by the continued support of our organisation, adding new signatories to the Code of Conduct and promoting the code around the world.”
ULD Care’s Code of Conduct of is a voluntary set of principles designed to “create a foundation for players in the air cargo industry to deliver safe, cost-effective and sustainable ULD operations and handling”.
In July, ULD CARE announced that it had launched an online process to allow industry organisations to sign up to the association’s Code of Conduct.
Read more ULD news