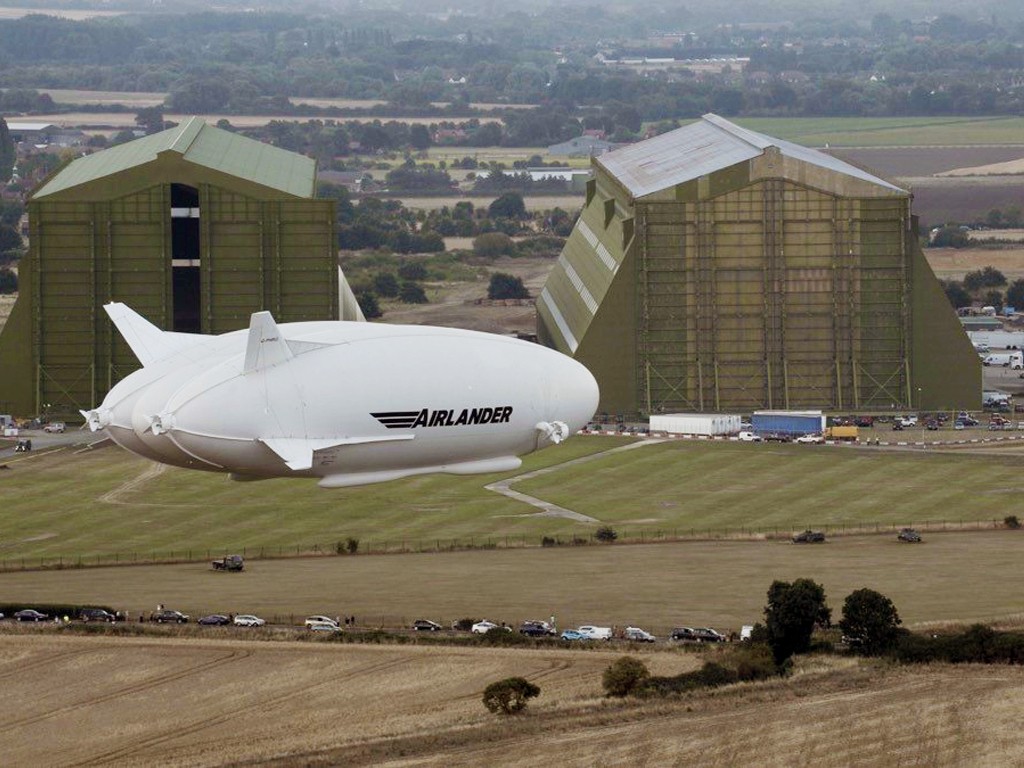 Hybrid Air Vehicles, the company behind the new Airlander hybrid aircraft – which utilise new technology to combines favourable characteristics of fixed wing aircraft and helicopters with lighter-than-air technology – has said that it has passed two milestones on its way to the resumption of its flight test programme.
The Airlander 10 hybrid vehicle’s test programme was suspended in August last year when the aircraft was damaged in a heavy landing at the UK’s Cardington Airfield. But the installation of an all-new Auxiliary Landing System (ALS) and the commission of a Mobile Mooring Mast (MMM) represent significant steps on the way back to test flying.
The aircraft’s ALS allows the aircraft to land safely at a greater range of landing angles.
It consists of two airbags that the pilot can deploy as an extra cushion on which to land.
The airbags are over 3 m in length and contain 15 cu m of gas (less than 0.1% of the entire hull volume). There is an airbag on each side of the Flight Deck, thereby offering enhanced protection to both the cabin and flight deck.
The aircraft’s ballonet fans inflate the airbags, the system taking under 20 seconds to be ready for use.
The ALS will be deployed on most landings in the flight test programme.
The MMM is an integrated tracked vehicle and mooring mast that will make it that much easier to ‘push back’ the Airlander when manoeuvring it around an airfield.
It mast has a single pivot interface with the Airlander, a much simpler mechanism than was previously used.
“Both of these pieces of equipment are new to Airlander, and have been developed as a direct result of learnings the team have established since the flight tests last August,” said Steve McGlennan, Hybrid Air Vehicles’ chief executive.
“They will make Airlander easier to manoeuvre and safer to land.
“Both of these enhancements are great engineering innovations, and show the creativity and ingenuity of the team working on Airlander to great effect.”
Hybrid Air Vehicles expect to take the Airlander out of its hangar this month (April) and the aircraft will be flying again “very soon after that”.
However, “Our focus remains the safest early flight, and we will not announce a next flight date in advance,” the company confirmed.
Hybrid Air Vehicles is in the final stages of an £8 million equity financing from existing shareholders, a process that the company said has “gone very well and is already well over half way to completion”.
Airlanders are quiet and environmentally-friendly. They have ultra-long endurance (Airlander 10 is designed to stay airborne for up to five days), and a point-to-point cargo-carrying capacity.
Moreover, they can take off and land in a short distance from unprepared sites in desert, ice, water, or open field environments.

American Airlines has signed an agreement to expand its capacity on the e-booking platform, cargo.one. Starting in Europe, forwarders will…

Cargo iQ has added two new board members, has re-elected its chair and vice-chair, and has unveiled its key strategies…

Swiss ground handler Cargologic has completed the migration of its cargo management system to Champ’s software-as-a-service (SaaS) version of Cargospot….