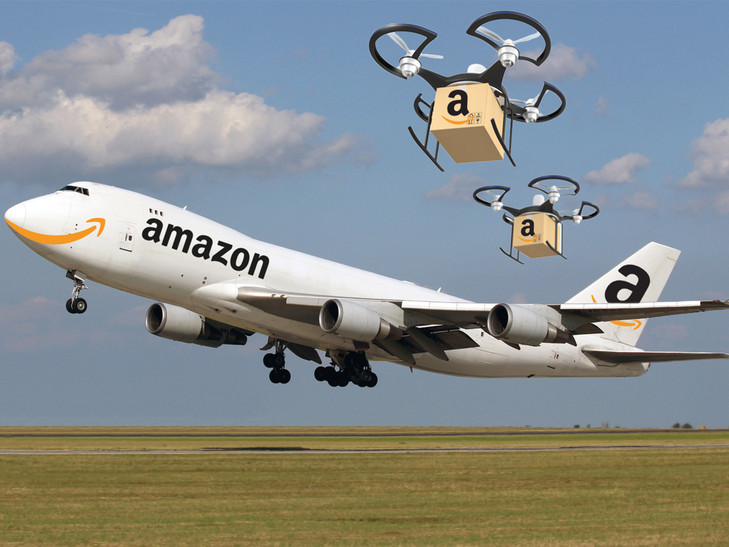 Amazon has gained permission from the UK government to look at the best way to allow hundreds of robotic aircraft or drones to safely navigate British skies.
The internet retail giant claims it could eventually allow small parcels to be delivered within 30 minutes of an order being placed.
Nick Miller, head of fast moving consumer goods (FMCG) at global supply chain consultancy Crimson & Co, believes that this is further evidence of Amazon shaking up and driving change among the retail industry, but added that it will take time to recognise its real impact.
Said Miller: “Amazon has always been about ease of service for the consumer. Clicking on an item online and then having it delivered to your front door took the hassle out of having to leave the house and trudge across the shops on a busy, wet Saturday afternoon.
“Amazon Prime Now evolved that service to take delivery times down from days to minutes with a one-hour delivery service. The launch of drone deliveries will arguably do the same.”
Miller added: “From Amazon’s perspective this could prove extreme lucrative – a reliable, affordable and quick means of delivering goods which does away the need of delivery drivers and trucks will be incredibly appealing.
“From a consumer offering all it will require is a space in your garden to place a landing mat which can receive the goods – it has the potential to be incredibly easy, but it will have limitations.”
Miller argues that drone deliveries will have restrictions placed upon them. Perishable goods, for example, will be unavailable which could prove advantageous to Amazon as it may deter competing technologies from the big supermarket retailers.
Also, products over a certain weight, size and value might not be suitable, resulting in the need to still retain traditional delivery services for certain goods.
Said Miller: “We will likely need to wait 18 months or so before we can truly gauge the success of Amazon’s drones, but this still represents an exciting innovation for both retailers and consumers with potential spin offs for other business ventures.
“Click & collect is still very prominent amongst both consumers and retailers – with the invention of drone delivery technology it could lead to outdoor space in heavily built up areas and cities becoming a premium.
“This might lend itself to the Uber model whereby the man on the street can now operate as a licensed taxi – this might take the form of a person renting out a space in their garden for a fee.”
A garden would then act as a drop off point for people in the street or surrounding areas, which don’t have access to outdoor space in order to collect goods – essentially it is a pop-up distribution centre.
“Ultimately, this is really encouraging to see a technology discussed so widely start to come to fruition – the next 18 months will be really telling for the retail industry,” Miller concluded.