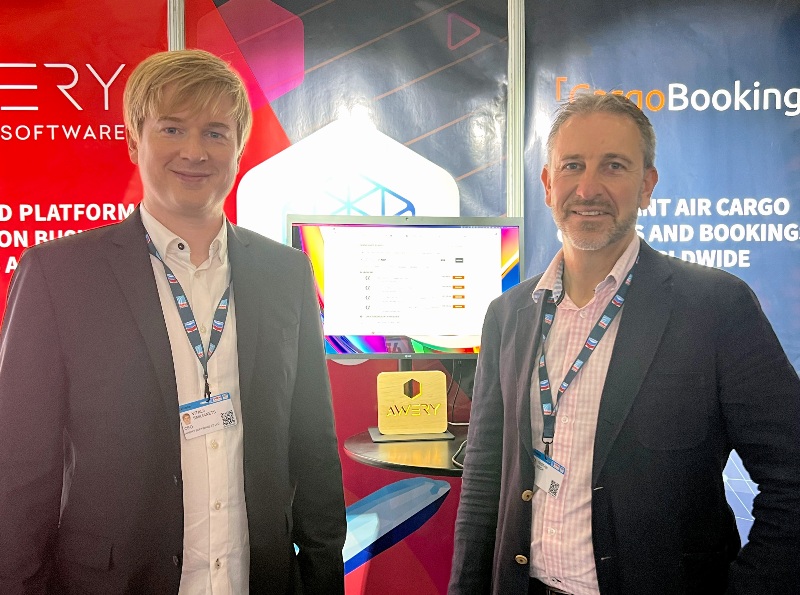 Digitalisation is one of the most competitive areas of the air cargo industry and Awery Aviation Software is in the thick of things.

The company is led by founder and chief executive Vitaly Similanets and offers an Aviation Enterprise Resource Planning (ERP) system; a booking portal named CargoBooking; and e-Magic, which converts emails into different formats to automate much of the booking process.

The last year has been a time of rapid change for the firm; many of its staff are Ukraine-based and had to move at the outbreak of war, while the number of bookings processed has taken off.

Speaking to Air Cargo News on the sidelines of the IATA World Cargo Symposium, Similanets says that at the outbreak of the war the company was quickly able to relocate staff without operations being affected.

“It was a challenging time and we were very lucky that everything was developed and hosted on the cloud, so for us it was quite easy to shift offices quite quickly,” he says. “That said, it is still a big challenge to relocate people. It was 21 families that we relocated to Bulgaria, so we had to find accommodation and a new office in a tight period of time.”

Chief commercial officer Tristan Koch (pictured right) adds: “It was a bit like Covid. It proves how mobile our industry is. And it is a secondary issue to the war, but the business didn’t miss a beat because we can be based anywhere.”

Moving onto the challenges faced when trying to digitalise the industry, Koch says implementation is an area that Awery puts a lot of focus into.

“The hardest thing is implementation and then the training of the users that are really going to benefit from using it,” he says.

Similanets adds that Awery offers a complete package of solutions, rather than a single element, making the implementation process even more complex.

However, Similanets says there has been a change in attitude from the top, which has helped the air cargo industry to speed up the process of going digital.

He explains that in the past, digitalisation was often driven by operations teams looking to improve processes, rather than top level management.

“When companies speak about digital, it is about improving the customer experience. If you don’t go digital, you are not competitive,” says Similanets. “So, for many companies it’s not just nice to have or something that will optimise cost, it really affects sales. That mindset is now coming from the top.”

One particularly competitive area of air cargo digitalisation is the third-party booking portal segment. Awery offers a booking portal solution – CargoBooking – but has taken a slightly different approach by targeting GSAs as well as airlines, rather than focusing solely on the latter.

“We have a lot of GSA clients as well as airline clients and the GSAs wanted to be able to offer their freight forwarder customers an option to book online but didn’t have their own platforms,” says Koch. “We have been putting our platform into these GSAs and smaller airlines and letting them white-label it [use their own branding].

“It is great for GSAs; they might have 10 airlines and all their inventory is on there in one place, all your transactions, a quotation tool, a booking tool.”

Similanets says that Awery is seeing big increases in the number of bookings made on its platforms, which reached around 40,000 in the second and third quarter combined.

These also include bookings made on the eMagic platform, which Koch describes as a bridging technology, helping users to automate much of the booking process while still using e-mails, which is how most air cargo bookings are made.

They explain that an average booking takes six or seven emails so having a system that can read the requests and populate a reply with a quotation speeds up the process.

Asked if there are any other challenges to the digitalisation of air cargo, Similanets says data sharing can be an issue, while who pays for API connections is another problem area.

He explains that every time data is shared over an API link a charge is made. At the moment, there is some debate over who should pay for these calls: the platforms, airlines or forwarders. However, Similanets stresses that Awery does not charge for API calls.

“We are pushing connectivity and openness,” he says. “We don’t want to charge for APIs.”

To conclude, another challenge, says Koch, is reduced spending by airlines on digital projects. “Pre-Covid those airlines with money had started to invest pretty heavily in digital transformation strategy,” says Koch. “When Covid hit, that was one of the very first budgets that got wiped out. There is a bit of irony here. At the very time technology was going to be the saviour of many of these things, they removed the budget for it.”