Cathay head of the e-cargo class 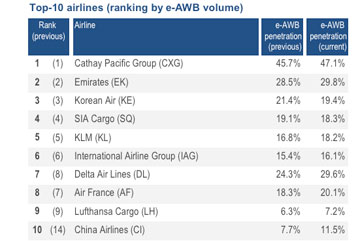 CATHAY PACIFIC remains top of the e-freight league table, IATA’s statistics show, writes Thelma Etim, deputy editor.
The carrier has retained its ranking as the airline that operates the most e-AWB shipments.
Cathay’s e-AWB volumes climbed by 47.1 per cent in May, whilst Emirates is in second place with 29.8 per cent.
Korean Air also remains in third place at 19.4 per cent.
Global e-AWB penetration reached 15 per cent in May, the association reveals.
Share this story