E-freight and the e-AWB: How much longer can we wait for full implementation? 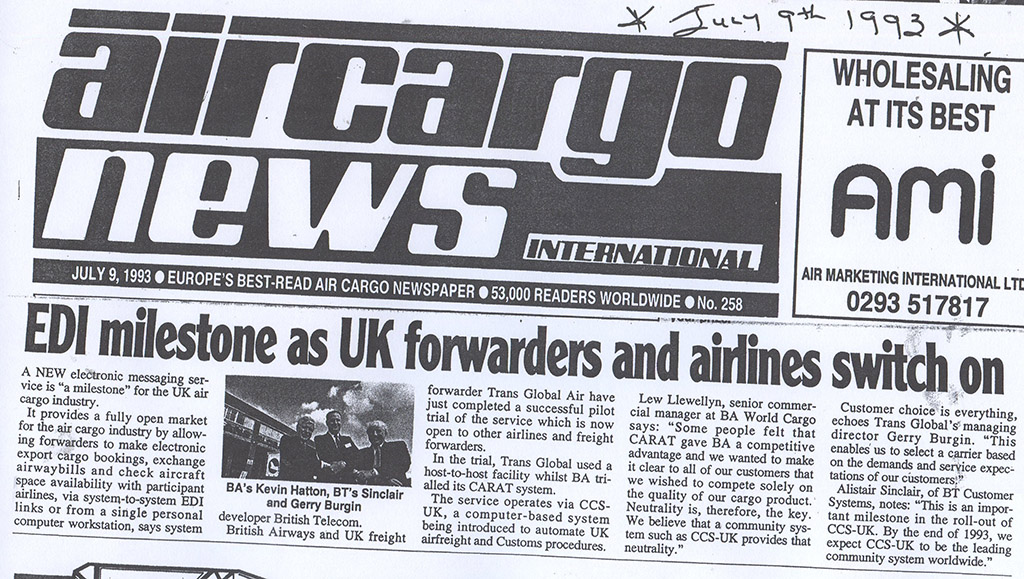 UK freight forwarder Gerry Burgin, with some 58 years in the air cargo business, is still passionate about airfreight digitalisation after more than two decades.
Burgin is using his experience to call for widespread adoption of the electronic air waybill (e-AWB) as a first step in full digitalisation of the air cargo supply chain.
I have recently been very active yet again in trying to further the cause of the e-AWB.
My interest in this subject began in the late 1980s when, as managing director of Trans Global Air Ltd (from October 1978-1995), I directed my team to link up with British Airways and then became the very first in the world to transmit successfully mainframe (host to host) FWB (Air Waybill Data Message) to British Airways and accept an FSU (Status Update Message) response. Unbelievably this was in July 1993, some 25 years ago.
This was followed closely by success with KLM and then Traxon – which included Lufthansa/Air France  Cargolux/JAL and others.
The progress since then has dragged on very slowly and even now uptake on agreed trade lanes has only just climbed to over 50%, mainly because of the multi-nationals’ interest (in which I was very much involved as a consultant) and in certain areas of the world where use of e-AWB has been mandated and/or strictly encouraged.
We need to look at why this situation exists, particularly as e-commerce has taken off in a very big way, affecting most people’s way of life.
The SMEs, there are hundreds of them in the UK alone and many thousands globally, rely on software houses to produce the software and interfaces with the airlines.
The software providers are not happy to write in both a version of Cargo-IMP and XML. There is not a uniform platform  but 17 versions of a 40 year old legacy system, Cargo-IMP, which is now “not fit for purpose”, and the future F-XML, but few if any airlines are up to speed with this protocol.
In addition, it is now suggested that the interface is in a new language, JavaScript Object Notation (JSON), and IATA is believed to be keen on an interface with One Record. So no wonder software houses are confused and hesitate to act.
[IATA’s One Record project aims to move beyond peer-to-peer sharing of information through the development of a centralised platform that can be accessed by all air cargo participants.]
Add to this the prohibitive costs for F-XML manuals and yearly licence fees and you have a real problem for smaller users and their software providers.
Then agents face the problem that, although IATA and the airlines signed up to an agreement (eAWB360) that they would acknowledge receipt of an agent’s FWB with either an acceptance message or a rejection message (FMA or FNA) that this has not happened.
Agents would obviously be reluctant to deliver to an airline or appointed ground handler without the knowledge that their FWB was received and acceptable.
Solutions:
Agree a common platform which is acceptable to the agents and, after an agreed period, drop support for Cargo-IMP and, if necessary, XML if there is a better-simplified and cost effective alternative.
Include both GSAs and cargo ground handlers in the messaging system.
Airlines to assist their customers to make sure that the messages are of sufficient quality to highlight errors in messaging and, if necessary, charge a cargo charges correction advice (CCA) for agents not performing after repeated advice on errors.
Educate agents globally to understand that the world is changing rapidly. Ready for carriage used to mean completing a good quality paper AWB, but now with over 50 countries and more in the future demanding advanced information before ”wheels up”, ready for carriage should now mean sending an acceptable quality FWB message to the carrier and delivering properly labelled packages.
The e-AWB is only the start of the process. We  then need to be able to receive all other documentation electronically: shipper’s invoices and packing lists, required certificates: i.e. origin/SITES /licences/security declarations etc.
We need, with even more competition coming on stream from the likes of Amazon and Alibaba, to move with times and we need to do it now!
This article was written for TIACA. Air Cargo News thanks Gerry Burgin and TIACA for making it available.
See website www.gerryburgin.com for career history.