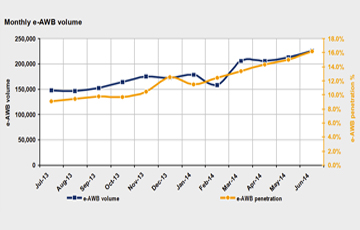 CATHAY and Emirates continue to lead the way in airline eAWB adoption, as paperless documentation has doubled in 12 months, reports IATA.
“The total number of eAWBs used grew by more than 50,000 during the last 12 months, with an average increase of one per cent each month since the beginning of the year,” a statement reveals.
A total of 77 airlines and 1,091 forwarders have now signed the multilateral eAWB agreement.
The airline association’s latest figures also show that worldwide penetration moved up to 16.2 per cent in June, an 8.3 per cent increase over the same period last year.
Typical recent developments include Singapore Airlines Cargo taking third place on the leaderboard as a result of rolling out eAWB operations to India and parts of Europe.
Other recent improvers include China Airlines, which is continuing its steady surge up the leaderboard, taking ninth spot from Lufthansa Cargo.