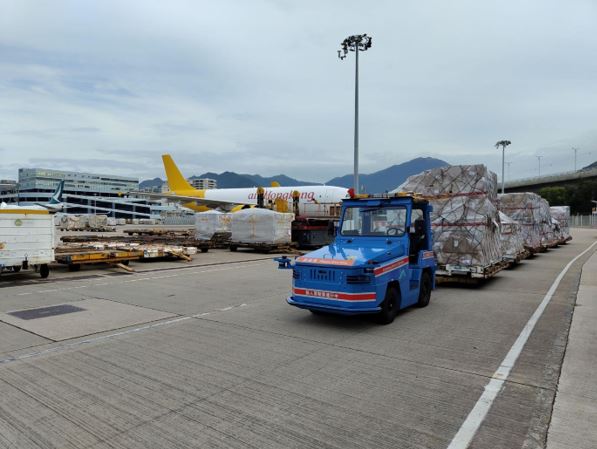 Currently, there are 20 units of autonomous electric tractors working around the clock at the airport for both cargo and baggage operations.

The autonomous electric tractors work in conjunction with human-driven tractors, which are freed up to perform more complicated tasks.

“In this project, autonomous electric tractors are deployed to release pressure of human drivers from the daily routine and simple driving tasks,” Teksbotics said.

“Human drivers can focus on more skilled tasks in the Cargo Apron Operation.”

The project comes as the airport, which was last year the world’s busiest cargo hub, is expanding into a Three-Runway System and faces the challenge of needing to recruit more drivers.

Teksbotics said there are also other benefits to using the autonomous tractors.

“Through this innovative human/robot collaborative model, AAHK has addressed the problems of the driver shortage, reduced accidents, zero emission and improved operational efficiency around the clock under any weather condition.”

The tractors are connected to a remote monitoring system via 4/5G network and also utilise laser imaging, detection and ranging (LiDAR) to prevent people or foreign objects from collisions and also for positioning.

Staff are able to observe the units from the remote monitoring system which is located in the Integrated Airport Centre.