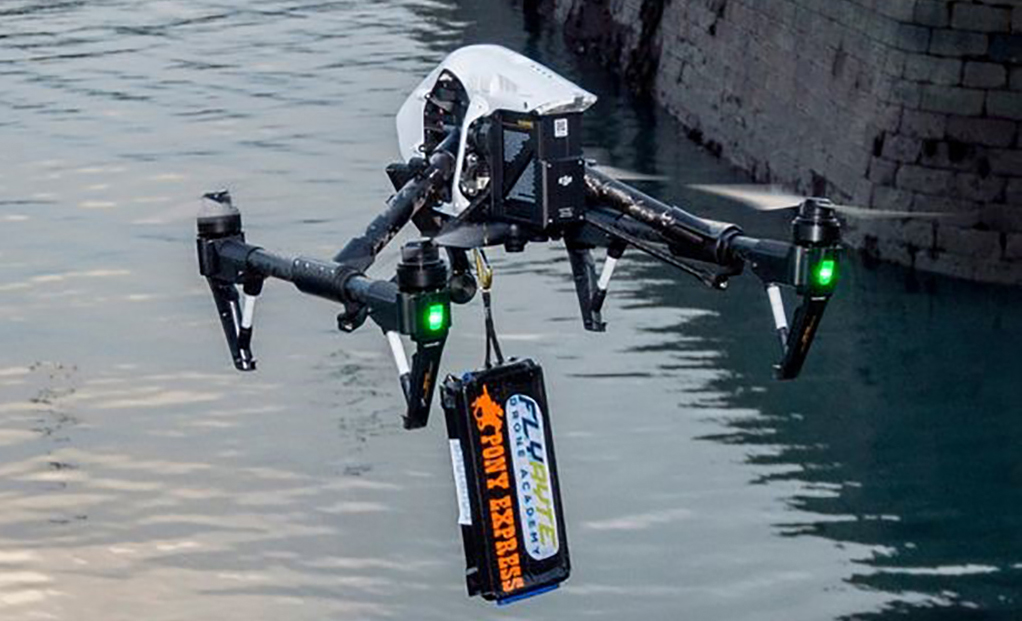 A drone has made Ireland’s first Irish Aviation Authority (IAA)-approved parcel delivery, ferrying emergency supplies 200 metres to a boat at sea.
The Dublin flight, lasting two minutes from take-off to parcel drop, was performed by Pony Express Couriers, using a DJI Inspire 1 drone laden with a parcel weighing 250 grams.
The parcel contained medical supplies: an emergency thermal blanket, an Epi-pen, bandages, plasters, thermometer, first aid leaflet, gloves, wipes and burn dressings.
It also contained food and a drink in the form of a high-energy bar and water. The supplies were attached to the underside of the drone in a waterproof container.
Pony Express is not planning to offer drone parcel delivery services in Dublin or Ireland “any time soon”, but is keen to be “at the leading edge of all new developments” in its market sector.
Audrey Browne, operations manager of Pony Express, said: “The delivery of low value, urgent items such as takeaway food, especially to remote rural areas is highly likely.
“But important city deliveries such as the majority of our same-day express services could not be trusted to drones yet, the possibility of interception, loss or damage would be too great.
“When parcel delivery by drone can be proven to work safely in an urban context, then we will revaluate the situation, but for now we will continue offering parcel delivery by our traditional methods of bicycles, motorbike, vans and trucks.”
Ralph James, the IAA’s director of safety regulation, said: “We’re delighted with the success of the first official parcel delivery in Ireland via drone under controlled conditions which met all regulatory requirements.
“The application of drone technology is vast and the IAA will continue to foster, promote and encourage its use with the emphasis as always on safety."
When asked in a survey: “Do you think drones would work in the courier industry?” some 51% of Pony Express Courier’s clients said ‘yes’, with a further 12% saying ‘maybe’, basing their response on their lack of knowledge on the technical abilities of drones.
Added Browne: “Overall there was a very positive response from those surveyed but safety was the biggest concern of clients. When asked ‘could drones safely deliver your parcels?’, 28% said ‘yes’ and 25% said ‘no’, with the rest responding ‘maybe’.
“Also, a number of clients commented that the friendly face of a courier could not be replaced by a machine.”